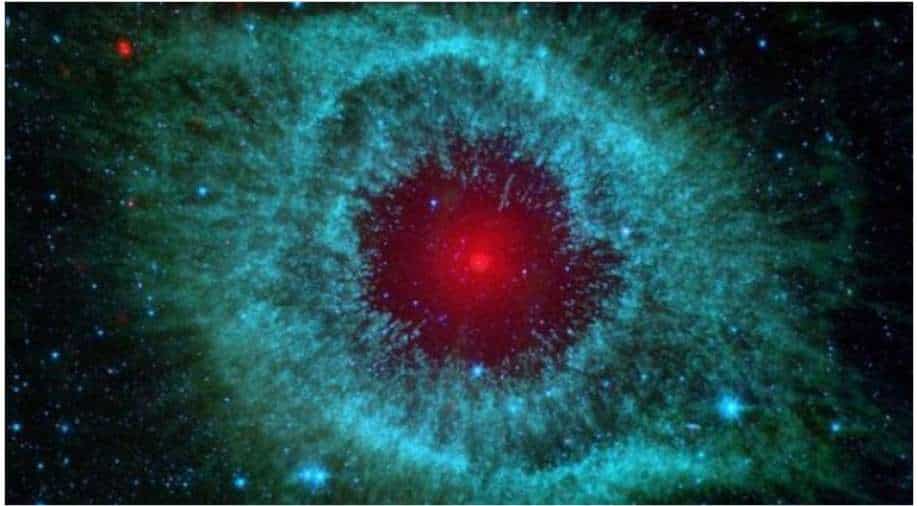 (Image: NASA) Helix Nebula resembling an an of the Devil himself Photograph:( Instagram )

NASA has posted another spectatcular image this Halloween season. The eerie image of Helix Nebula posted by NASA resembles the cool, stealthy eye of the Devil himself. The image has been posted on Instagram

Space is full of wonders beyond our imagination. Though we have gazed far and deep into reaches of the black expanse, a lot remains unknown and what is known continues to surprise and mesmerise us. It's a good thing NASA and other space agencies are keeping track of it all.

A new image posted by NASA has transfixed everyone. The image shows a celestial structure that is like an eye in the sky looking at us from above. The eye does not appear benevolently watchful but has a mesmerising glow to it. The eyelashes are blue while the iris is blazing red.

Who is watching? God? or the Devil himself?

The eerie beauty is imparted to the photo by Helix Nebula which has been captured by Spitzer telescope. Helix Nebula is 700 light-years away from Earth and located in the Aquarius constellation.

"The two-light-year diameter shroud of dust and gas around a central white dwarf, is an example of a planetary nebula, one of the final stages in the evolution of a Sun-like star. The dust makes this cosmic eye gleam red," says NASA in its Instagram post.

NASA further explains that nebular material was ejected from the star thousands of years ago.

"...the close-in dust could be generated by collisions in a reservoir of objects, like our own solar system’s Kuiper Belt or cometary Oort cloud. Formed in the distant planetary system, the comet-like bodies have otherwise survived the dramatic late stages of the star’s evolution...," says NASA

Check out the image

The image has gone crazy viral on Instagram and has been liked by more than 1000000 people.