Women shouldn't just choose their political representatives, they should become one Women’s representation in legislatures throughout the country needs to be written down into law and not left to the discretion of political parties.

The socioeconomic prospects of a country are best measured by the social and political status enjoyed by its women. In that context, India became a trailblazer by granting women the equal right to vote from day one along with men through Universal Adult Suffrage. It may not sound like a big deal today — but it is.

Take, for example, the case of the US, which took 144 years, and the UK, which took 100 years to confer political equality on women. By the time women got unconditional suffrage in the latter in 1928, Dr Muthulaxmi Reddy, a 41-year-old doctor, had already become the first female member of the Madras Legislative Council of colonial India.

Unfortunately, equal voting rights and elections have not translated into better outcomes for women in the field of political and socioeconomic participation. After seven decades, we remain a highly patriarchal society. Social and cultural stereotypes, educational and economic backwardness, safety and security issues lead to women facing uncertainty inside and outside the four walls of their home.

India suffers from one of the worst sex ratios in South Asia — 940 women for every 1,000 men. We rank poorly in World Economic Forum’s Global Gender Gap Index — 108 out of 149 countries. Even within that index, we rank 142 out of 149 countries on economic opportunity and participation. This deficit also translates into gender-skewed voter lists. For instance, the ratio was as low as 800 to 1,000 males when I joined the Election Commission in 2006.

To enable greater participation of women as voters, the Commission undertook the onerous task of searching for ‘missing women’ from the voter lists. Gender was included as a principal element in the review of the health of electoral rolls. It was found that some of the common issues post registration included concerns about security at the booths (for instance, encountering anti-social elements), family pressures, sanitation facilities, etc.

Subsequent voter education campaigns included targeted communication to family elders for curing stereotypes. Separate queues for women, female staff at the booths, female police force and all-women polling stations in some areas contributed to jump in female turnout. For instance, in 2012 UP elections, a simple but innovative idea of allowing two women in the queue to enter the polling station for every man proved to be a game-changer.

The EC’s National and State level election icons helped bring women out. Celebrated figures such as folk singers Malini Awasthi in UP and Sharda Sinha in Bihar, inspired millions of women to go to the polling booths. Due to such efforts, women voters outnumbered men in the 2010 Bihar elections (54.85 per cent against 50.77 per cent) and 2012 UP elections (60.28 per cent against 58.68 per cent).

Due to the EC’s Systematic Voter Education for Electoral Participation (SVEEP) aimed at educating the masses and focusing on women, there was a 10 per cent point jump in women’s turnout - from 55.82 per cent in 2009 to 65.63 per cent in 2014! The icing on the cake- women outnumbered men in 16 states despite the adverse gender ratio. The gender voting gap shrank to mere 1.46 per cent. 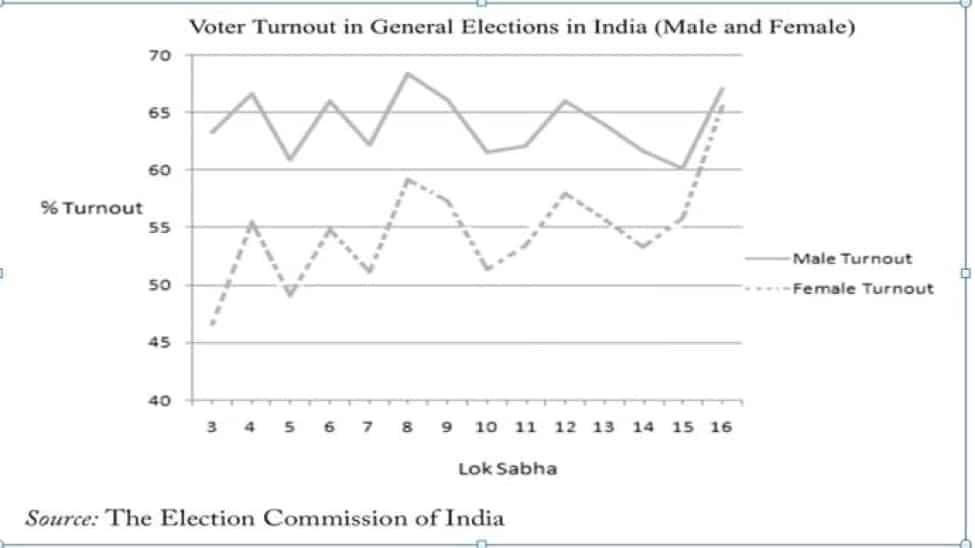 While the Commission has lead the way in making elections inclusive, the sorry state of women’s participation in the legislatures is abysmal 12.15 per cent in the Lok Sabha (Fig 2) and even more abysmal in most state legislatures. (Fig 3) 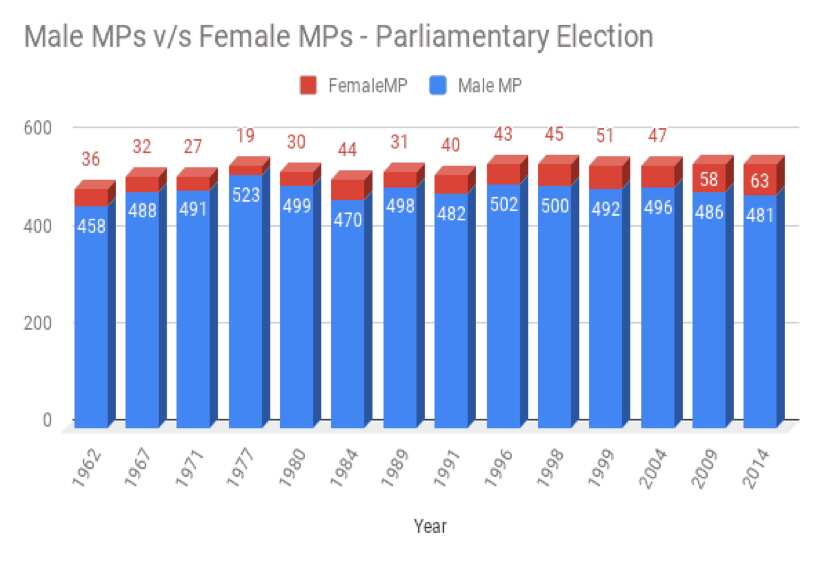 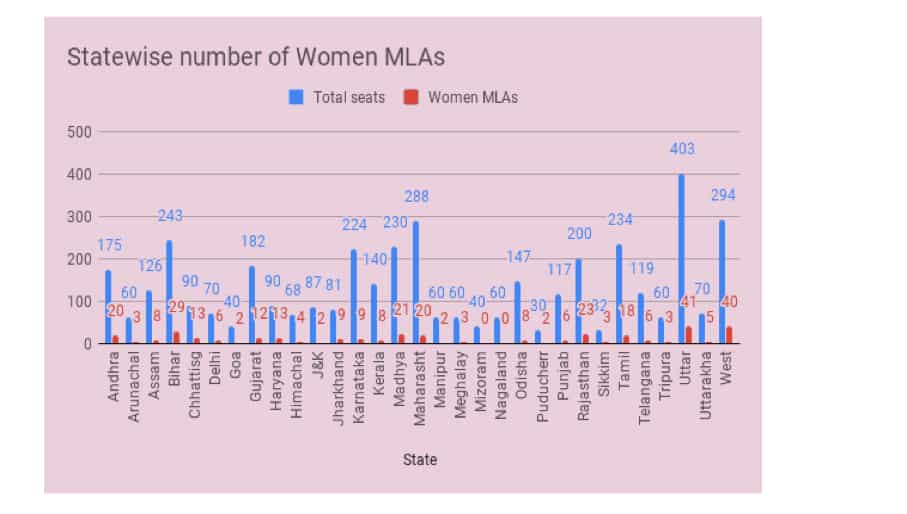 This is shameful as compared to some neighbouring conservative Muslim countries, such as Afghanistan, Pakistan and Bangladesh, which have high female political representation. This has become a reality due to affirmative legislation on women’s representation. Nepal has led the way with its latest progressive constitution and has recorded dramatic increase of women at all levels of government, not just the national legislature. (Fig 4) 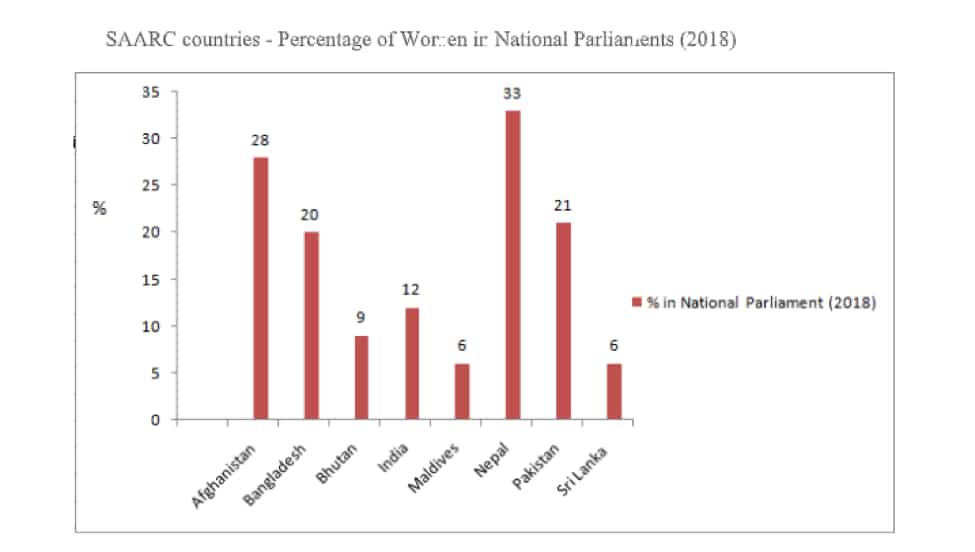 The unwillingness of Indian political leadership (which is dominated by males) to provide women fair representation in its legislatures is paradoxical. Women were allowed 33 per cent in local bodies in 1993, which was later made 50 per cent in 2009. A number of states have introduced 50 per cent reservations in corporations and municipalities. But the upper levels of government are still to pass their respective reservation bills that have been debated ad nauseam.

Unfortunately, political parties are reluctant to even give enough tickets to women. Hardly one-tenth of total candidates are female — the excuse of low ‘winnability’ of female candidates is a myth. Anyone with the slightest bit of knowledge of our electoral history is aware of the simple fact that their “strike rate” has always been as much as two to four times higher! (Fig 5)

In this context, it is a welcome transformation that some parties are now competing to give tickets to women, with Trinamool Congress giving 41 per cent tickets to women, and Biju Janata Dal giving 33 per cent. The gender participation within all parties is abysmal and this is certainly a good start. But a lot more needs to be done. The women’s reservation bills at both state and National level are overdue.

Though our elections are considered a gold standard, the agenda of women’s political representation remains unfinished. The society must ensure that women don’t only choose their representatives, but become one. A comprehensive reform agenda must be a priority for the 17th Lok Sabha. Women’s representation in legislatures throughout the country needs to be written down into law and not left to the discretion of political parties. It is time the political parties follow the example of inclusive elections set by the Election Commission by making parliament inclusive. The time for walking the talk is now. 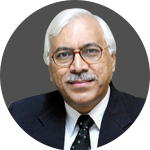