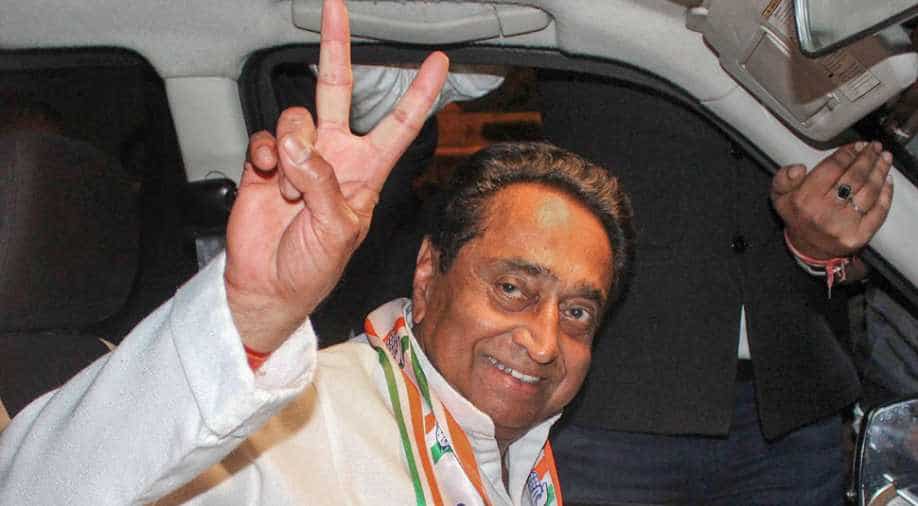 During electioneering, the Madhya Pradesh party chieftains had sunk their differences to give a united fight to the BJP

Cabinet formation is proving to be a tight-rope walk for Madhya Pradesh chief minister Kamal Nath, who took over the reins of office on Monday ( December 17) after Congress party, which ended up two short of a clear majority, mustered support of 2 BSP, 1 Samajwadi Party and four Independent MLAs to form the new government in the state after 15 years of Bharatiya Janata Party (BJP) rule.

The supporters of senior Congress leader and scion of the erstwhile ruling family of Gwalior Jyotiraditya Scindia were determined to see their leader, who was the state Congress poll campaign committee chairman, as the next chief minister.

After the Congress romped home victorious, they were determined to see Scindia as chief minister but this did not happen. The Scindia supporters, who are obviously dejected, are now using every bit of their tugging power to pull as many ministerial berths and powerful portfolios as possible.

The Madhya Pradesh Congress unit has always faced the challenge of divided loyalties. During electioneering, the state party chieftains had sunk their differences to give a united fight to the BJP. Now with elections over, the Congress party’s inner-party rivalry once again has surfaced in a big way and this got demonstrated by Nath’s swearing-in that turned out to be a solo affair, unlike Rajasthan and Chhattisgarh.

Besides the factions loyal to Nath and Scindia, there are also powerful groups in the Madhya Pradesh Congress unit aligned to former chief minister Digvijaya Singh, former Union Minister Suresh Pachouri, former leader of Opposition in the state Assembly Ajay Singh, former State party chief Arun Yadav and former Union Minister and tribal leader Kantilal Bhuria. None of these groups is ready to concede even an iota as far as their demands vis-a-vis cabinet formation are concerned.

Carrying all these groups together and keeping the party satraps in good humour is not easy and what makes the task even more formidable for the new chief minister is that while picking his Cabinet colleagues and junior ministers, special attention also will have to be paid towards maintaining regional balance and ensuring adequate representation to different sections, including minorities.

The gigantic task of Cabinet formation remains a huge priority for the chief minister. Empty state coffers, corruption at all levels of the government and an unbridled bureaucracy also pose a big challenge.

Meanwhile, immediately after assuming office, Nath acted swiftly and passed the orders to waive the farmers’ loans up to Rs 2 lakh to fulfil a major pre-election promise. Responding to a poser in this regard, at his maiden press conference held after his swearing-in, Nath said since there are no ministers, he is the Cabinet. He also used this occasion to share his concern about in-migration and especially named Uttar Pradesh and Bihar, while announcing that industries would get incentives from the state government only if they reserved 70 per cent of jobs for those belonging to Madhya Pradesh.

A policy decision has been taken in this regard, he added.  This one announcement has opened up the Pandora’s box as Congress party interested in a grand alliance for the 2019 Lok Sabha elections would not like to rub its allies in Uttar Pradesh and Bihar. When this issue was brought to the notice of Congress President Rahul Gandhi by media-persons, he appeared flustered while replying that he would be able to respond only after gathering details.

Nath is also under attack by those trying to rope him in as an accused after the Delhi high court on Monday sentenced Congress leader Sajjan Kumar to imprisonment for life in an anti-Sikh riots case of 1984. BJP functionaries from Madhya Pradesh were seen lending support to Sikh protestors who came out gunning for Nath after the court convicted Kumar of instigating violence after Indira Gandhi was assassinated by her two Sikh bodyguards.

The Madhya Pradesh chief minister has described the tirade against him as politically motivated.  There is no case or FIR against him. It is not the first time that he has been sworn-in. He took oath as a Union minister way back in 1991, Nath has asserted to steer clear of allegations and charges.