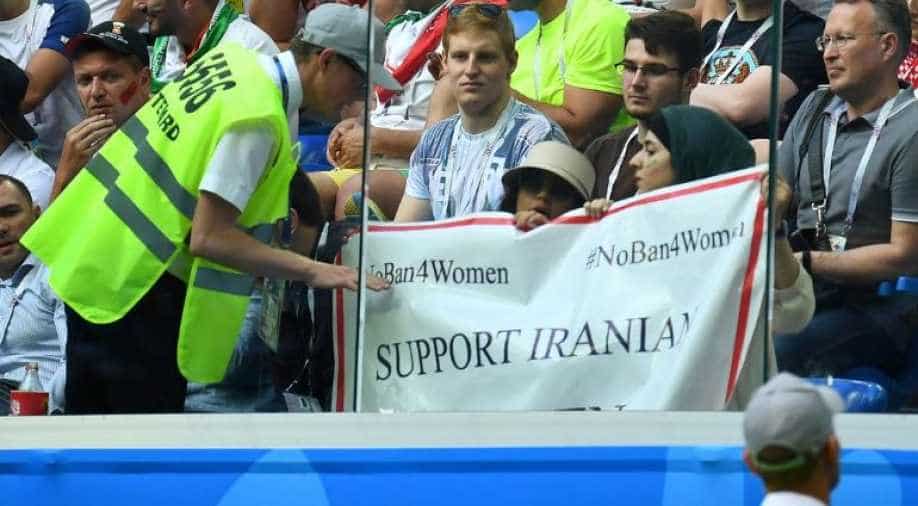 General view as a steward talks to fans displaying a banner referencing Iranian women during the match. Photograph:( Reuters )

Sahar Khodayari's death has put the responsibility on the Iranian government for its discrimination of women and on global and regional soccer governors for allowing Iran to get away with it.

Infantino and Al Khalifa have been selective in their support for women’s soccer rights.

Infantino was in the White House to urge US President Donald J Trump to endorse equal pay for male and female players on the same day that FIFA expressed regret at the death of Khodayarí, but did nothing to force Iran to lift its ban on women attending male sporting events.

The statement called on Iranian authorities “To ensure the freedom and safety of any woman engaged in this legitimate fight to end the stadium ban for women in Iran” but failed to exert a price for continued maintenance of the ban.

Dubbed Blue Girl, a reference to the colour of her favourite, storied Tehran soccer team, Esteghlal FC, Khodayari, put herself on fire after hearing by-standers speculate that the Revolutionary Court could that day sentence her to two years in prison for "Openly committing a sinful act by appearing in public without hijab" and "insulting officials."

Khodayari was charged after being stopped by security in March as she sought to enter Tehran’s Azadi Stadium dressed as a man to watch Esteghlal play an AFC Asian Cup match against the United Arab Emirates’ Al Ain FC.

Khodayari’s disguise is standard practice for activist female soccer fans in a football-crazy country that has the questionable honour of being the world’s only nation to bar women from attending male sporting events.

Saudi Arabia, the only other country that long maintained a similar ban, abolished the restriction in 2017 as part of Crown Prince Mohammed bin Salman’s social reforms.

In a wave of outrage on Twitter under the hashtag #Blue_Girl, Iranian deputy telecommunications minister Amir Nazemi thundered: "The death of #blue_girl is a conviction for all of us."

Mulanim, another tweeter, went a step further, pointing fingers at FIFA. “Sahar Khodayari burnt herself to death in protest. When would you actually do something? @FIFAcom #fifawwc,” she tweeted.

Taken together, the two tweets put the responsibility on the Iranian government for its discrimination of women and on global and regional soccer governors for allowing Iran to get away with it.

FIFA announced this week that it was sending a delegation to Iran to monitor Iranian moves to allow women to attend World Cup qualifying matches.

The problem is that FIFA has exerted punitive pressure only regarding World Cup matches rather than threatening to ban Iran from all international soccer events if it fails to completely lift the ban.

FIFA’s push on World Cup matches could open the door to a complete lifting of the ban. Past experience, however, suggests that Iran could well treat granting women fans access to World Cup matches as an exception that confirms the rule.

FIFA and the AFC are missing an opportunity to potentially force Iran to lift the ban given that barring Iranian participation in international tournaments would add to the government’s woes at a time that it is struggling to dampen the impact of harsh US economic sanctions designed to persuade Iran to renegotiate the 2015 agreement that curbed the Islamic republic’s nuclear programme.

The sanctions were imposed last year after Trump withdrew from the agreement.

Speaking to reporters, government spokesman Ali Rabiei suggested that a threat by FIFA to exclude Iran from international matches could push the country’s rulers over the hump.

“The government’s general view is to allow women to enter football stadiums, and infrastructure is needed for women’s presence in stadiums,” Rabiei said.

Khodayari’s self-immolation alongside the refusal by an Iranian judoka to withdraw from the 2019 Judo World Championships in Japan on orders of the government sparked a Twitter hashtag, #BanIRSportsFederations, that this month has been used tens of thousands of times.

Taking the call for a ban on Iranian participation in international tournaments and their qualifiers literally, Ali Karimi, a past Asian footballer of the year and top Iranian player opted to lead the way and set an example for FIFA and the AFC.

Karimi advised his 4.5 million followers on Instagram that he would boycott soccer matches in protest against the ban on women. His post was liked more than 100,000 times in less than 30 minutes.

Amir Etemadi, a liberal activist, seconded Karimi’s decision, Tweeting that “It is time to boycott Iranian sports globally and domestically.”

The , #BanIRSportsFederations hashtag constituted a protest against government interference, a no-no under the rules that govern global sports governance and insist on maintaining a largely fictitious separation of sports and politics.

The online protest was sparked when top-ranking judoka Saeid Mollaei said he feared for his safety because he had rejected a demand to withdraw from the tournament in Japan to avoid the risk of having to face an Israeli athlete.

Mollaei was spared facing the Israeli after being defeated in the semi-final.

Iran extends its refusal to recognise Israel to barring its athletes from competing against Israelis in international tournaments – a violation of rules governing those competitions.