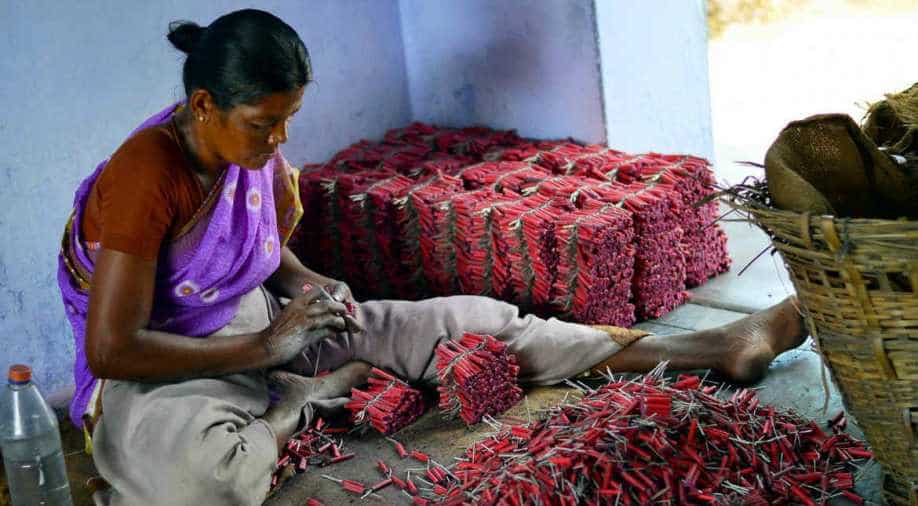 Are crackers the main culprit or are the people who find a few hours of pleasure in them, ie, typically children celebrating Diwali, just easy prey to impose rules on?

In the mid 19th Century, when the persona of Santa Claus began to gain popularity in the United States, gifts became part of the imagery. Slowly, this trend grew, until in 1924, the department store Macy’s included a Santa in their Thanksgiving Parade and soon after Selfridges started decorating its shop front window for Christmas, urging customers to buy stuff around Christmas time.

Until then, Christmas had been a family function, not the crazy commercial shopping extravaganza that it has now grown into in the West. Over the past 100-odd years, gift giving has become a competitive, exhausting activity, so much so that the American mom fretting over lists of who gets what gift in the holiday season has become a cliché in popular entertainment.

Commercialisation of Christmas and the whole forced cheer of a Santa lookalike in every high street store is known to psychologically affect all the lonely people who do not feel so ho-ho-ho.

It led to the creation of the oxymoronic phrase “holiday season blues” to indicate how those who are single or are not able to be with their families, end up feeling lonely and depressed, watching the hyper celebrations of others.

The culture of conspicuous consumption is also leaving out all the poorer people of rich countries who cannot afford to go on a buying spree.

So the effects of this practice have implications for many sections of society.

But the governments of these countries are not interfering and ordering a trial ban on gift purchases or limiting gift buying to one weekend only during the holiday season. I am obviously drawing a parallel to our own courts intervening in how festivals should be celebrated.

In India, we have been told that not lighting crackers on Diwali is no big deal because crackers were not always there and got added on Diwali about a hundred years ago for commercial reasons by some Sivakasi businessmen.

Well, there are Mughal miniature paintings showing lighting of sparklers on Diwali and historical records that go back much further. If you check in any family, at least three generations will attest to having burst crackers on Diwali as children. That’s enough of a tradition, even if you don’t want to delve into history. In one fell swoop, being dismissive of a tradition that has endured all through living memory of most people, is disrespectful, to put it mildly.

So I get it that crackers are harmful to the environment. But I have to roll my eyes at this because everyday, on the road I see at least one auto, two-wheeler, tempos or truck spewing black exhaust with impunity right on the face of the car behind and whizz past.

We have to slow down and let the offender pass in order to avoid the toxic cloud. In the construction frenzy that prevails in NCR throughout the year, dust clouds are always rising around the whizzing cement churner and JCB when one passes any under-construction building of which there are hundreds around Delhi.

These are perineal sources of air pollution while crackers happen for a few hours annually. Are crackers the main culprit or are the people who find a few hours of pleasure in them, ie, typically children celebrating Diwali, just easy prey to impose rules on?

An activist for air quality has been quoted saying crackers were “low hanging fruit”. That’s another word for soft targets. The high hanging fruit —those in the construction business or truck owners or stubble-burning farmers who are potential vote banks — are too prickly to be touched.

How about cigarette smoke? Tobacco smoke particles and outdoor PM2.5 pollution share some similar chemical compounds and have a similar role in cancer causation.

A controlled experiment in Italy found that fine particulate matter emitted by cigarettes is 10 times greater than diesel car exhaust. But who can dare to say that cigarettes can only be smoked for a few hours, as specified by the court, to help reduce air pollution?

Yes, crackers add to air pollution. But there are bigger fish in the sea who are the main wrongdoers! No one is meddling with them because there are powerful lobbies, money and vote banks involved. Crackers are a lesser evil, but they are being targeted because their users are children and families who will meekly comply.

It is this bias that jars. It is a bit like the income tax department threatening small entrepreneurs and white collared workers while beer barons and diamond czars have flown the coop.

The nanny State interfering in all aspects of life is anyway pointless. Everywhere one hears people asking “But how are they going to ensure no one lights a cracker after 10 pm? Is the police coming to each verandah to check?”