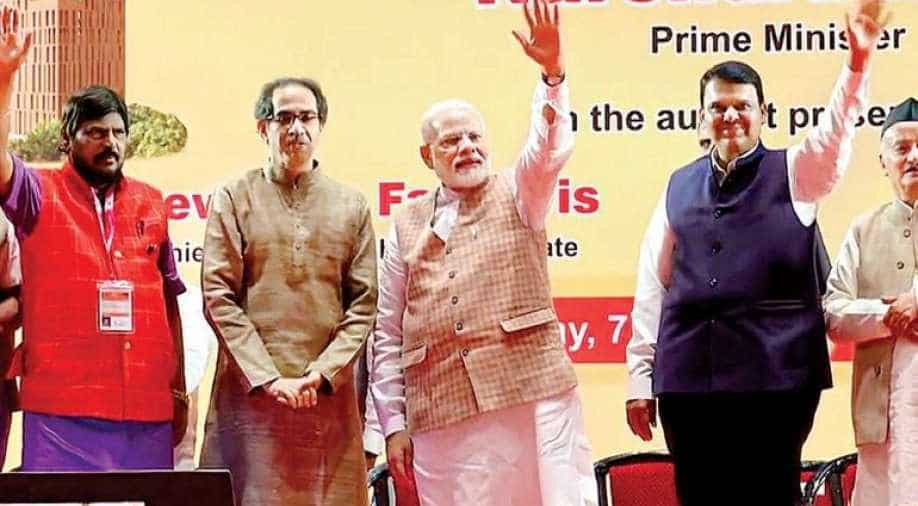 BJP, bolstered by a strong performance in Lok Sabha polls riding on the Modi wave, appears in no mood to accept Shiv Sena’s demands

The political scene in Maharashtra is heating up. The saffron alliance is gearing up for elections. Buoyed by the Lok Sabha victory and complete disarray in the Congress and Nationalist Congress Party (NCP), the BJP-led alliance hopes to retain power with a thumping majority.

If the 2019 general elections are an indication, the BJP-Sena alliance is leading in 227 Assembly constituencies, more than three-fourth majority. Congress and NCP are falling like a pack of cards with MLAs switching sides on a daily basis.

Senior Congress leader in Maharashtra and former leader of Opposition in the Legislative Assembly, Radhakrishna Vikhe Patil, has joined the BJP, while NCP’s Mumbai chief, Sachin Ahir, has joined the Shiv Sena. There is a competition underway between BJP and Shiv Sena, as to who is able to attract the maximum defectors. Five MLAs each from Congress-NCP alliance have joined the Shiv Sena and BJP respectively.

Amidst all this, the sticky issue of seat-sharing talks have begun. As per reports, BJP has offered 110 seats to Shiv Sena, while it wants to contest on 160 seats, leaving 18 seats for smaller regional allies. This is much lower than the 50:50 formula, which was agreed upon while finalising Lok Sabha seats distribution.

Shiv Sena won 63 seats and finished runner up in 37 seats in the 2014 state elections. The 110 number is arrived through this formula. Shiv Sena is asking for 126 seats.

BJP, bolstered by a strong performance in Lok Sabha polls riding on the Modi wave, appears in no mood to accept Shiv Sena’s demands.

Murmurs have started doing the rounds that BJP and Shiv Sena are likely to contest separately, like the last time in 2014.

The bone of contention is not just seat distribution, but also the post of Chief Minister. The Shiv Sena had declared in its mouthpiece Saamana in June 2019 that by the time the party celebrates its next foundation day, on June 19, 2020, the state would have a Shiv Sena chief minister.

Shiv Sena workers have claimed that an agreement was reached between Amit Shah and Uddhav Thackeray at the time of Lok Sabha seat finalisation that both the parties will share the CM’s post for a duration of two-and-a-half years each.

Some BJP party leaders have said in the past that it can contest on all 288 seats. However, Chief Minister Devendra Fadnavis has stated categorically that the elections will be contested in alliance with Sena and under his leadership.

BJP won 122 seats on its own in 2014 after the break-up with Sena. Many party insiders feel that it is in a much stronger position today. Modi has won a bigger mandate in his second term. Fadnavis has five years of achievements to showcase, including farm loan waiver and Maratha reservation. The abrogation of Article 370 has further given a fillip to BJP’s prospects and Modi’s popularity is at an all-time high. The arrest of Chidambaram and filing of FIR against Ajit Pawar in the Rs 25,000-crore MSCB scam has given BJP further ammunition.

All this, party strategists feel, will help to bridge the shortfall of 20-odd seats. BJP had contested on 260 seats in 2014. An alliance with Sena means BJP has to deny tickets to more than 100 contestants, which may lead to heartburn and rebellion. They argue that the BJP should go it alone in the polls. In a worst case scenario, if it falls short by a few seats, Shiv Sena will have no choice but to support BJP like in 2014 when results threw a hung verdict.

Shiv Sena, which has played the elder brother for decades, is not able to digest the new structure in which it is playing second fiddle to BJP. That’s why it is applying pressure on its partner so that it could at least agree for the Deputy CM chair for Shiv Sena.

Sena’s tally is also likely to increase at the expense of Congress and NCP in 2019 even if it contests alone. However, if it contests alone, it runs the risk of losing out on sharing power, if BJP gets a majority on its own.Sena has to decide whether it wishes to occupy the opposition space left by Congress and NCP, or it wishes to continue to enjoy the fruits of power.