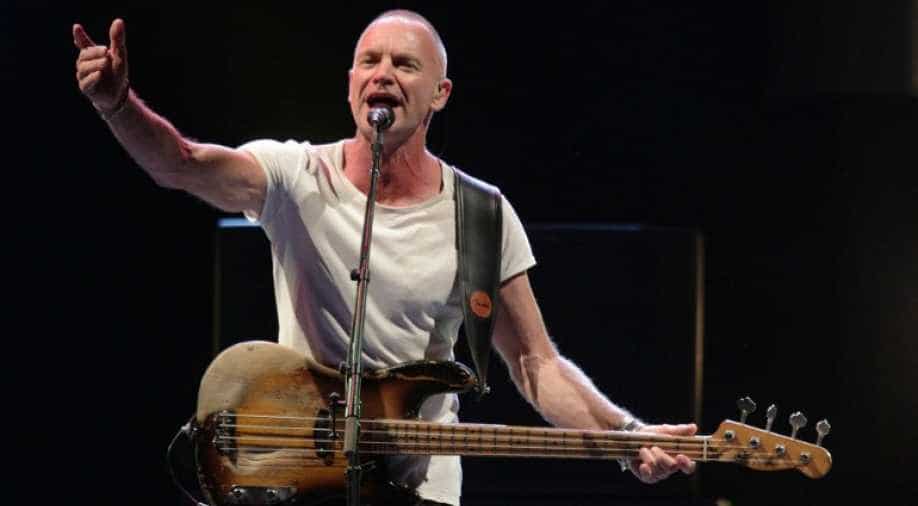 Reflecting the desire by music lovers to revive the scarred Bataclan, Sting's hour-long concert sold out within minutes of going on sale Tuesday. Photograph:( AFP )

Rock star Sting will on Saturday reopen the Bataclan, the revered Paris concert hall where jihadists massacred 90 people, with a hugely symbolic show to mark the first anniversary of France's bloodiest terror attacks.

Scores of survivors of the Bataclan assault, the worst in the gun and suicide attacks across the city that night which left 130 dead, will attend the concert, the dominant event in a weekend of otherwise low-key commemorations.

On Friday, November 13, 2015, a night of horror began with three suicide bombers who blew themselves up outside the Stade de France.

Other Islamic State gangs opened fire on defenceless people on cafe terraces, but the worst nightmare was in the Bataclan, where cowering or wounded concert goers were coldly shot dead one by one.

On Sunday, President Francois Hollande and Paris Mayor Anne Hidalgo will unveil plaques to the victims outside the stadium, the Bataclan and bars and restaurants targeted that night.

A year later, nine people out of the around 400 injured in the rampage are still in hospital.

Reflecting the desire by music lovers to revive the scarred Bataclan, Sting's hour-long concert sold out within minutes of going on sale Tuesday.

Hundreds of places have been kept for those who survived the attack, which unfolded during a concert by the US group Eagles of Death Metal. Families, psychologists, and counselors will be on hand to support them.

While reopening the doors will mean reliving painful memories for many, Jules Frutos, who has co-run the venue for the last 12 years, told AFP, "We had to go on after such horror and not leave a mausoleum, a tomb."

Frutos said he was determined to put on a fully-fledged concert before the November 13 anniversary, an event high in emotion and music, worthy of the rock fans who died.

"Reopening the Bataclan with a ceremony and then a bit of music didn't cut the mustard for me at all," he said.

Frutos said he rang Sting himself to ask him to play after the British singer told a journalist he was keen to help, having last appeared at the Bataclan with The Police in 1979.

"His coming here is what we needed," said Frutos, admitting the weight of the occasion had been too much for many top French acts.

Sting, 65, said he wanted to "celebrate the life and the music that this historic theatre represents" and promised to donate proceeds to two charities set up to help survivors.

The Bataclan is one of the revered names in the Paris concert scene. The building dates to 1864, originally designed to look like a Chinese pagoda, and derives its name from "Ba-ta-clan," an operetta by Jacques Offenbach -- the composer of "can-can" fame.

It has been a temple of rock music since the 1970s, drawing stars such as Lou Reed, Genesis, The Clash, The Cure, Blur, Jeff Buckley and Prince and a springboard for French performers such as Telephone, Alain Bashung and Indochine.

Since the attacks, the hall's devastated and blood-stained interior has been completely replaced, from the seats to the floorboards, with identical fittings.

"We wanted to change everything so nothing would remain of that terrible night," said Langlet, who told reporters "several million euros" has been spent on refurbishing the building in identical style without losing the venue's intimate atmosphere.

"We decide to change everything so nothing would change," he added.

Survivors, including members of Eagles of Death Metal, will gather outside the venue again on Sunday morning when Hollande and Paris Mayor Hidalgo unveil a plaque inscribed with the names of the victims. No speeches are expected.

Victims' groups have asked that politicians refrain from trying to put their stamp on the anniversary, which comes six months before presidential elections in which terrorism and the place of Islam in France have emerged as key themes following a string of attacks.

"For the victims, it's their day of mourning, their day to come together," Caroline Langlade, president of the Life for Paris association said.

Several small-scale gatherings and tributes are planned across the French capital to mark the anniversary.

The Bataclan will remain dark on the anniversary itself, before opening again on Wednesday for a series of concerts by British singer Pete Doherty, Senegalese star Youssou N'Dour and British Sixties legend Marianne Faithfull.