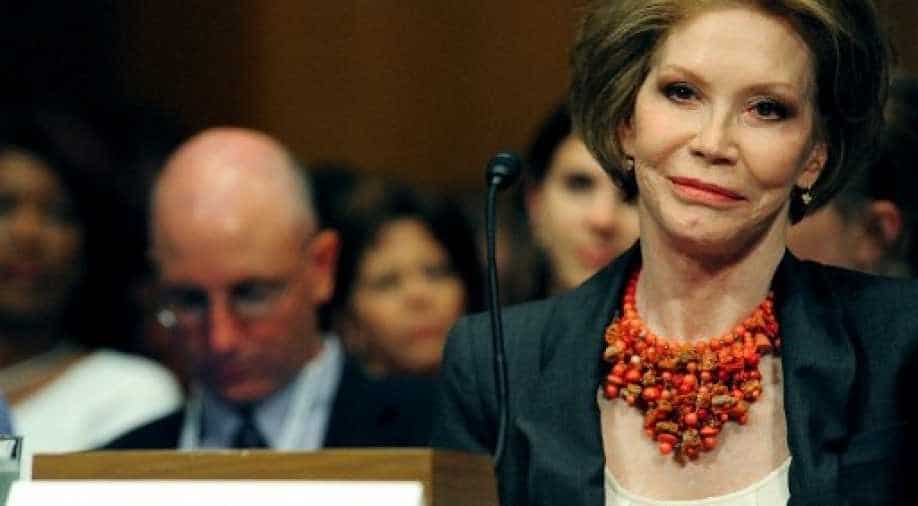 Legendary actress Mary Tyler Moore, who delighted a generation of Americans with her energetic comic performances and broke barriers with her iconic portrayal of a single career woman, died Wednesday after years of ill health. She was 80.

Moore's eponymous sitcom ran for seven seasons in the 1970s and was named by Time Magazine as one of 17 shows that "changed television."

She died in hospital in Connecticut, according to media reports, after battling diabetes for years and undergoing brain surgery in 2011.

"Today, beloved icon Mary Tyler Moore passed away at the age of 80 in the company of friends and her loving husband of over 33 years, Dr. S. Robert Levine," her longtime representative Mara Buxbaum told AFP in a statement.

"A groundbreaking actress, producer, and passionate advocate for the Juvenile Diabetes Research Foundation, Mary will be remembered as a fearless visionary who turned the world on with her smile."

"The Mary Tyler Moore Show" was radical in its time -- featuring a single woman, living on her own, and chasing her dream as a television reporter.

As top executives of MTM Enterprises, Moore and then-husband Grant Tinker created and produced "The Mary Tyler Moore Show" and its spinoffs, and were also responsible for hit shows including "Hill Street Blues," "St. Elsewhere" and "Remington Steele."

"A minute's silence as we remembered one of the true greats of TV comedy," tweeted actor Stephen Fry, who was rehearsing on the Hollywood stage made famous by Moore's show.

Michael Keaton described her as "iconic, my boss, castmate and a friend" while filmmaker Kevin Smith said she was a "tireless defender of animals, and scourge of diabetes."

"Truly she turned the world on with her smile," he added, referring to the lyrics of her show's theme song.

US media mogul Oprah Winfrey has said Moore was one of her early inspirations.

Winfrey said she watched her show every week as a child, and wanted "to be Mary Tyler Moore. I wanted to be Mary, I wanted to live where Mary lived."

In the popular sitcom, the TV couple famously slept in separate twin-size beds, and Moore was limited to wearing capri pants in just one scene per episode.

Van Dyke said working with the "beautiful, bright and talented," Moore was "an effortless piece of cake."

Speaking at the 2012 Screen Actors Guild awards, where he presented Moore with a lifetime achievement award, Van Dyke said he initially had his doubts about the unknown 20-something, wondering, "Can she do comedy?"

It turns out, he said, she could do "everything." She danced, sang, did slapstick, and was such a perfect onscreen match for him, Van Dyke said, that many viewers wondered whether the couple were also married in real life.

On the big screen, Moore starred opposite Elvis Presley in "Change of Habit," and with Julie Andrews in "Thoroughly Modern Millie."

She earned an Oscar nomination for her role in Robert Redford's searing family drama "Ordinary People."

She also took home numerous Emmy awards for her television work and a Tony Award for a Broadway performance in "Whose Life Is It Anyway."

Behind the scenes, Moore faced a number of personal difficulties, including an addiction to alcohol. Her only child, Richie, born during her first marriage to Richard Meeker, struggled with emotional issues and drug abuse.

He shot and killed himself in 1980, at age 24, in an incident that was officially deemed an accident.

Moore, who was born in Brooklyn and moved to California as a child, married her third husband, Robert Levine, in 1983. She was an active spokeswoman for animal rights and for diabetes, which she was diagnosed with in her 30s.

"What you see is what you get. That's Mary Tyler Moore. She didn't have a bad bone in her," King told CNN.