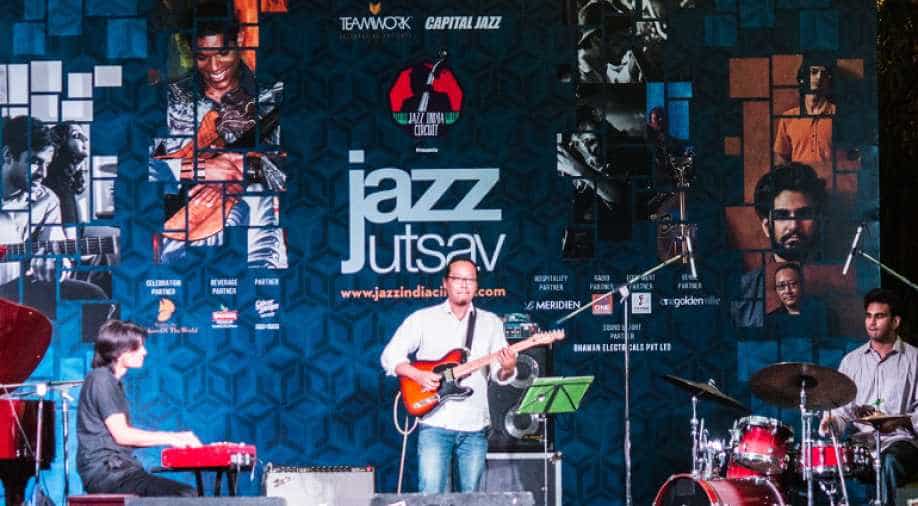 New Delhi is grooving to jazz, it is now time to bring the best infrastructure and performers to the city. (Photo credit: Bharat Tiwari) Photograph:( Others )

Jazz music arrived in India in the 1920s and has been living here ever since. While Mumbai and Kolkata continue to fight for claims over the “real jazz scene”, New Delhi has been nurturing the music form in its unique way.

Last week exemplified the city’s love for jazz in all its frenzy and tenderness. A city infamous for its ebullient chatter, held its breath for some magnificent live jazz performances. Legendary jazz musician Stanley Jordan was in town for Jazz Utsav 2017, an annual event in the capital since 1984. Earlier known as Jazz Yatra, the festival has brought icons like Al Jarreau and the Eric Trouffaz 4tet to the city in the past.

Jordan, four time Grammy nominee, is famous for his “touch technique” on the guitar. One of the rare musicians who can play the guitar and the piano simultaneously, Jordan says that this technique involving tapping on the fretboard of the guitar with both the hands is an import from his piano days. Jordan regaled a keen audience with his compositions as well as a wide array of renditions from popular to classical. From Sting’s ‘Fragile’ to Bela Bartok’s piano works, Jordan was perfectly at ease with his music. He called Mozart “the biggest pop star” for ruling the charts for more than two centuries. Doffing his hat to the Delhi audience, Jordan said that he stood there without any fear, free to improvise. And improvise he did!

Jordan regaled a keen audience with his compositions as well as a wide array of renditions from popular to classical. (Photo credit: Bharat Tiwari) (Others)

During his performance Jordan shared how he trained as a pianist in his childhood and moved to guitar later to overcome financial distress through adopting something more popular. This, in a nutshell, is the story of jazz. This is also why Sebastian’s dream and his journey towards its realisation in Damien Chazelle’s La La Land became everyone’s own. Played by Ryan Gosling, Sebastian is the everyman serving the cause of jazz.

New Delhi has its own Sebastian in Arjun Sagar Gupta of the ubiquitous The Piano Man, a less than two years old jazz bar. It was only natural that Jordan, along with the other bands playing at the Jazz Utsav, would hop across to the bar for an extended concert.
During the 70s and 80s, the golden years of jazz in New Delhi, Connaught Place was a hub of live performances. Now extinct, restaurants like Volga and Laguna once reverberated with the notes of baritone saxophone eavery evening. Hecke Kingdom, whose fan list included the likes of Pt Ravi Shankar, played at Volga and was immensely popular.

With the advent of electronic dance music (EDM), jazz slowly slipped to the margins in terms of being an entertainment activity. Bollywood’s sporadic romance with jazz kept it alive as if through stents. In recent years, with increased exposure to western cultural products, jazz is beginning to recapture popular imagination. Indian Council for Cultural Relations has been promoting the music form by organising an international jazz festival since 2011. An open-to-all event, the three day festival at Nehru Park has been a big crowd puller.

India's box office contribution to La La Land, that won six Oscars yesterday including Best Original Score and Best Original Song, is more than 1.1 million dollars, which is not bad for a film with an 'A' rating from the censor board. This unusual love story set to jazz music tugged at our heartstrings.

No wonder, then, that The Piano Man reservation ledger screams BOOKED all the time. An employee shares, “To get a table it is safest to book two weeks in advance.” Last Friday, Vasundhara Vidalur performed here to a jam-packed house and many disappointed fans outside who couldn’t cram themselves in. One of them remarked, “Why can’t they move to a bigger venue? This is beginning to put everyone off.” A complaint can also be a compliment.

New Delhi is grooving to jazz, it is now time to bring the best infrastructure and performers to the city. It may not boast of the Taj ballroom of Mumbai or the Grand Hotel of Kolkata, there is still a Nehru Park and other willing venues.