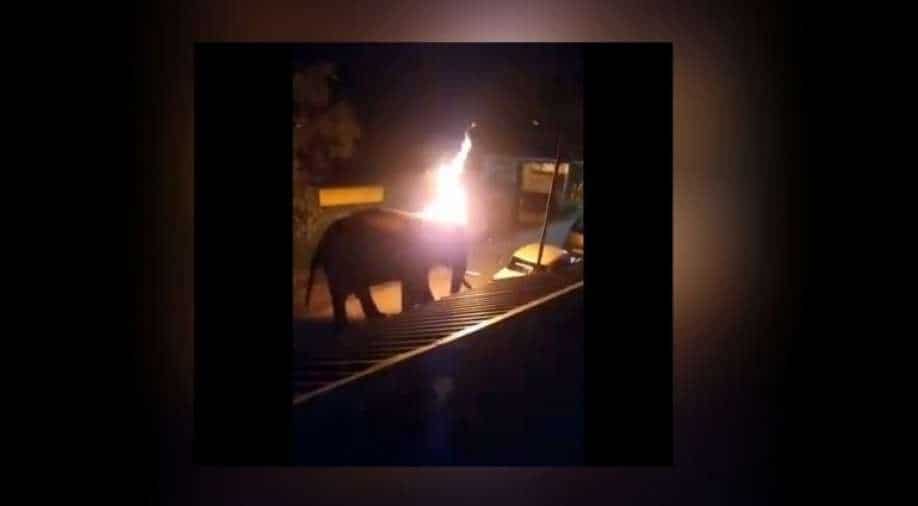 'That’s it, burn and die' an individual is heard saying towards the end of the video, as the elephant trumpets in fear and runs away

Absolutely horrific. The people running a private resort throw a lit-tyre on a 50-year-old #elephant in the #Nilgiris, that died as a result of the injuries it suffered. @SanctuaryAsia @nehaa_sinha @elephantfamily @Mugilan__C pic.twitter.com/YE8UI8dBIi

Forest officials have confirmed that this was the same tusker that died earlier this week on January 19. “The death is caused by an earlier injury and a festering wound, which was a few months old. We had been providing treatment for the wild tusker, but this setting ablaze incident happened after that” KK Kaushal, Field Director, Mudumalai Tiger reserve told Zee Media.

Srikanth, Deputy Director of Mudumalai Tiger reserve has said, based on investigation they have arrested Prasath and Raymond Dean, whereas a search is on for Ricky Rayan, who is currently not in station.

Forest department officials say that the wild elephant nicknamed “Ronaldo” or “SI”was always spotted in and around Masinagudi-bokkapuram area. It was about two months back that the officials got to know of an injury on the elephant’s back and started observing the elephant’s movements, following which they deputed a team to feed, care for it.

“Our watchers noticed a deep hole(injury) in its back and thereafter we started feeding it fruits embedded with medicines. Once we tranquilized the elephant and treated it with antibiotics. There was some progress in the elephant’s condition gradually, but it always kept coming close to habitations and blocking the highways, without causing any harm” Srikanth, had earlier told Zee Media.

He added the their team had found the elephant to be very weak, a couple of days ago, after which they decided to tranquilize it and move it to the elephant camp for further treatment. It was when the elephant was being loaded onto a truck and taken to the camp that it collapsed and died, on Tuesday.

“Post mortem report has revealed that the deep injury in the back had led to puss formation in the lungs. The wound could have been from sharp bamboo edges and the injury was in an area that cannot be reached by the trunk” Srikanth said.