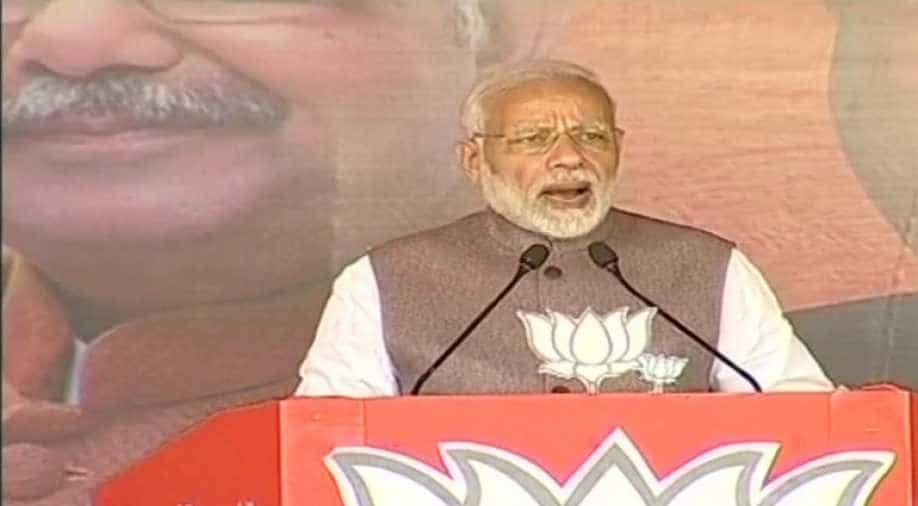 Earlier in the day, Gandhi during a rally in Alwar district said the prime minister recites Bharat Mata ki Jai in all his election rallies but works for industrialist Anil Ambani.

Prime Minister Narendra Modi Tuesday latched onto Congress chief Rahul Gandhi's 'Bharat Mata Ki Jai' barb at him, saying he would recite the slogan ten times in the presence of lakhs of people.

"Congress has a 'naamdar'. That naamdar issued a 'fatwa' today that Modiji should not start addressing election rallies with 'Bharat Mata Ki Jai'. And therefore, I, today in the presence of lakhs of people here, I crushed his fatwa and said Bharat Mata ki Jai ten times," he said at a rally in Sikar district of poll-bound Rajasthan.

Earlier in the day, Gandhi during a rally in Alwar district said the prime minister recites Bharat Mata ki Jai in all his election rallies but works for industrialist Anil Ambani.

Modi also hit out at former chief minister Ashok Gehlot's reported remarks of "who knows who will become crorepati", saying it reflected the real intention of Congress party.

Gehlot made the remarks when media asked him who would be the chief minister if the party won.

Holding Congress responsible for all the problems prevailing in the country, the prime minister said people should not allow the party to enter Rajasthan for centuries.

He also said the Rahul Gandhi-led party gave tickets to family members of those lodged in jail in rape cases and women and girls should not give vote to Congress.

He was apparently referring to Mahipal Maderna, who was the minister in Gehlot cabinet, and former MLA Malkhan Bishnoi. They are facing trial in the notorious Bhanwari Devi abduction and murder case in Jodhpur.

The Congress has given ticket to Maderna's daughter Divya Maderna from Osian and Bishnoi's son Mahendra Bishnoi from Luni seat in Jodhpur in the upcoming state polls.

Cornering the opposition party on the issues of farmers, Modi said the UPA dispensation had promised loan waiver and returned to power in 2009 Lok sabha polls, but only Rs 58,000 crore out of the total loan amount of Rs 6 lakh crore was waived off.

Alleging that the Congress looted and destroyed banks, the PM said a loss-making steel company was given loan after a call by Naamdar and the money went to a fake company which existed only in papers, and that fake company purchased lands in Rajasthan and transferred them to a relative of Naamdar.

"The rates of the land increased seven times in just two years," he said.

The comments apparently hint at the land purchased by the company of Priyanka Gandhi's husband Robert Vadra in Bikaner.

Rajasthan goes to polls on December 7.