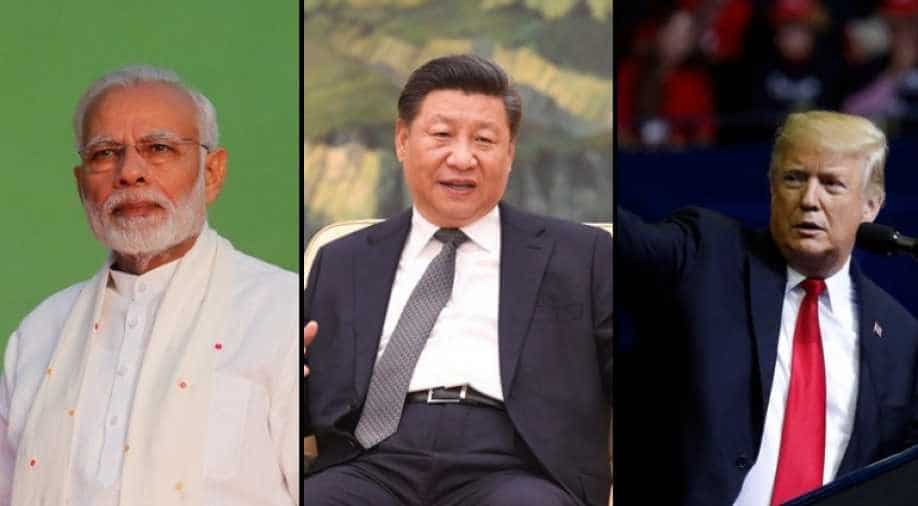 India headed by Narendra Modi should perhaps take a leaf out of Trump, or maybe even read up Sun Tzu

“The supreme art of war is to subdue the enemy without fighting.” ― Sun Tzu, The Art of War

Chinese philosopher Sun Tzu's famous military classic written over 1,500 year ago sheds light on how to take on an enemy in the field of battle and vanquishing him through "all means necessary" - applying force is explicitly stated as the "last option".

US president Donald Trump it seems has read the book inside out, more than President Xi for even the IMF now believes China will be hit hard due to the escalating trade war. Trump has no doubt realised it is no use taking on China with weapons but to subdue it without fighting - just like Sun Tzu suggested.

India headed by Narendra Modi should perhaps take a leaf out of Trump, or maybe even read up Sun Tzu if it wants to slay the Dragon which looks at its weakest point in decades.

The trade war has definitely started to bite, not only does it show in the growth figures with China now under 7 per cent, the fact that Chinese government has been holding daily press conferences to threaten, beg and plead the US shows the Dragon has begun to lose its fire.

The current situation presents India with a great economic soft spot to strangle China - without confronting it militarily.

China has suddenly realised US is a "big bully" after crushing tariffs imposed by Trump. The Chinese ambassador, in fact, went one step ahead and requested India for enhanced trade ties.

"If you know neither the enemy nor yourself, you will succumb in every battle" - Sun Tzu

Last year India's trade deficit with China was highest at over $60 billion. Interestingly, China's fertilizer export to India grew nearly 17 per cent in 2017 worth over $1 billion.

China has in fact rightly targeted the biggest growth areas in India - agriculture and electrical products. China's machinery exports to India rose to a mammoth $21 billion last year, an increase of over 28 per cent.

India, however, refuses to address trade deficit as a matter of pressing concern with Chinese authorities while playing up the issue of Doklam & Arunachal - political issues which is likely to be a lose-lose game for India.

In July, the Indian government had escalated the burgeoning trade deficit at the World Trade Organization calling it "unsustainable" while pressing China to lower trade barriers in Pharma, IT, rice and meat to address the trade imbalance, however, it has shied away from raising the issue directly to Chinese officials, nor has it sent any official delegation to Beijing in order to press its case.

Clearly, India's outlook towards trade is not like the Trump administration, however, it must be noted that trade is directly linked to job creation, an area famously milked by Trump but India has failed to address the issue altogether.

President Trump has ordered China to cut its deficit with the US by $200 billion which may be impossible but it has made everyone, including Americans aware about China's imbalance in trade with the United States.

"We cannot enter into alliances until we are acquainted with the designs of our neighbours," Sun Tzu

China is India's largest trading partner accounting for nearly $90 billion share of the trade pie, eclipsing the US by over $15 billion. Although India and China had signed the Most Favored Nation Treatment agreement under the 1984 pact but clearly China has taken the lead in targeting India. Even though India is known as an "IT superpower" but it is China which has exported IT and machinery to India flattening India's chances and key growth driver.

During the event, the minister said industry associations want the government to pursue "defensive approach" to Free Trade Agreements(FTAs) and raise tariffs on goods in order to protect domestic producers. The minister released a study on China's trade policy vis a vis other countries, possible negotiations under Asia Pacific Free Trade Agreement(APTA) and a separate section deals with opportunities arising out of US-China trade standoff.

The Indian government is still trying to study the report and is yet to form a "line of attack" or strategy as Sun Tzu would say. No timeline has been set on how to take advantage of the current trade war between China and the US.

PM Modi will be meeting Chinese President Xi Jinping in Argentina next month on the sidelines of the G20 summit, no doubt there will be photo-ops and India-China friendship slogans raised but India should be mindful of its place in the world economy and look to seize the moment.

India has already lost the first-mover advantage as far as trade is concerned but like the US, it should devise a Sun Tzu-like forward strategy to scare and strangle the Middle Kingdom if it wants to be taken seriously in the economic high table.

India in the 21st century can no longer afford to be a mere market but has to seize other markets in order to grow and compete or risk being taken over by foreign companies which are aggressive, focused and more importantly - ruthless.

Trump had recently called India a "Tariff King", it is time India lived up to its label.