With China tilt over, Maldives says it is looking for 'generous aid' from India 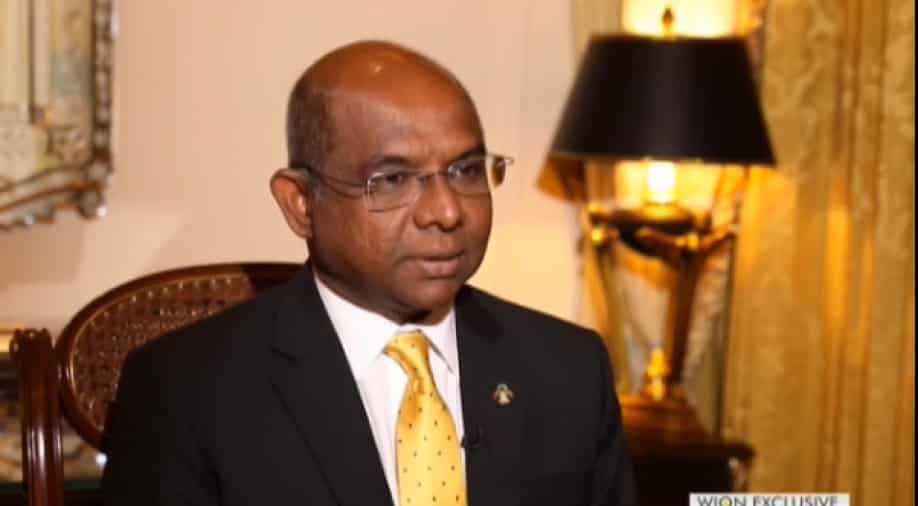 The Maldives has seen a major change in the last few months. On November 17 Ibrahim Mohamed Solih took oath as new President in which India's Prime Minister Narendra Modi was the only head of state as a guest. The New President will be visiting India in December. Meanwhile, in an exclusive conversation with WION's Principal Diplomatic Correspondent Siddhant Sibal, the new Maldives Foreign Minister Abdulla Shahid spoke at length about the expectation of the new Maldives government from India, Maldives-China Free Trade agreement, Indo-Pacific concept among other things.

WION: How do you characterise the current India-Maldives ties?

Abdulla Shahid: Thank you very much. It's a pleasure to be here in Delhi. My first visit after taking office. I had the opportunity to receive PM Modi at the airport upon his arrival at the stadium in which President Solih took the oath of office. The warmth with which people of Maldives received PM Modi on his arrival characterises the new era in India Maldives ties. The Modi-Solih meet was characterised by warmth, closeness and sincerity. I was in the meeting and I see nothing but success in years to come

WION: What kind of assistance would you expect from India?

Abdulla Shahid: As you know President Yameen's dictatorship had taken the country to the brink of bankruptcy. We need generous assistance from the Indian government to overcome the difficulties we are facing. We need budgetary assistance. We also need to deliver on the campaign promises we have made. The pledges of development need to be delivered. In order to do that.. we need general assistance.

WION: The India Maldives Joint statement called for security and peace in the Indian ocean. What are the threats the region faces?

Abdulla Shahid: Our region is key to maritime throughout the world. All the ships that travel between the African continent and northeast Pacific go through our waters. We have a responsibility. We have seen increased piracy in the Indian ocean. We have seen increased tension within the Indian ocean, be it the rivalry between neighbouring countries or rivalry between Indian ocean interested countries, we need to simmer it down. We need to make the Indian Ocean a zone of less tension and free access to all.

WION: How do you see the Indo-pacific concept and the quad?

Abdulla Shahid: We are fully involved in the Indo-Pacific concept of free access. In order for intl trade to increase, we need openness. We can't, in this day and age, draw lines or sea lanes.

WION: Your take on the Quad and statements made after the meet in Singapore on the country?

Abdulla Shahid:  Statements shows they are concerned about the dictatorship that was in the Maldives.

WION: Indians faced a lot of visa restrictions. Will those be relaxed now?

Abdulla Shahid: When I meet my counterpart I will disc ease of visa restrictions for Maldivian nationals and Indian nationals. I think both are countries must come to an agreement on visa easing. Hoping to sign a new agreement during President Solih's visit in December

WION: So president Solih is coming to India in December?

Abdulla Shahid: The new president will bring a message of goodwill of returning India-Maldives relation to normalcy. We recognise the long-standing generosity of the Indian government that will be the message President Solih will bring.

WION: You defence minister has already told WION that Indian helicopters are needed. How important are they to your country?

Abdulla Shahid: These helicopters have been used for humanitarian missions. Total of 164 patients has been airlifted from remote islands to Male. We as a seafaring nation, we lose people in the sea. In having these machines on site, will help us launch missions more easily.

WION: What are the key foreign policy decisions you will be taking?

Abdulla Shahid: The foreign policy created by Yameen is a total disaster. The Maldives has been sidelined. The Maldives lost its credibility internationally, nobody listens to what the Maldives says. We as the chairman of the alliance of the small island in the last 2 years have not done anything. We have played into the hands of the people who want climate change debate to be sidelined. Two years as the chair of the alliance we became disreputed. We will be vocal again on climate change. We will be vocal on environment issues internationally. Last time we wanted to contest for human rights commission in Geneva under Yameen, we didn't get it due to disastrous track record. We will go back and establish our self as the lead country on human rights issue within the UN. We are joining the Commonwealth. The Maldives left commonwealth since it asked Yameen government to get back in the main folds of democracy and human rights. Commonwealth is an association or group of countries to promote human rights, democracy and good governance.

Parliament will endorse the cabinet decision and president will write to the commonwealth to rejoin it. Through it, our young people will get a lot of opportunities.

WION: No discussion is over without mentioning China. How will be the ties between New govt and China?

I know that both India and China will respect the sovereignty and territorial integrity of Maldives. None of these countries would be interested in making the Maldives part of theirs. They will be interested in sitting down with us as equals and discuss issues. I see that is the direction we have to go. We have to keep in mind that our closest neighbour is India. The country which has delivered assistance to us. India will also in the future help us not because of geographical proximity only but because of a long-lasting friendship. We had a water crisis in Male, and Indian navy helped us overcome the difficulty. Because of the proximity and nature of the relationship between two countries, India has the tendency to immediately help us without a second thought. It's the nature of the relationship. These are eg of past. In future, I see nothing but good will.

WION: Will you relook at Maldives China FTA?

Abdulla Shahid: FTA was rushed through the parliament. I was in the parliament that time and I was not informed of the session. Many of my collogues did not know seating was taking place until it was over. Parliament or the parliamentary committee took less than 15 minutes also to review the 100-page document. It is unreasonable to believe that such a document can be reviewed in such little time. Now I am the foreign minister and I'm supposed to comment on the document which I don't think is fair. So I will get my officials to go through the document and advice the government. I will get the new attorney general to look at it. It is fair that we go in an agreement of that nature of that importance after knowing what it has.

WION: How much the Maldives owes to China?

Abdulla Shahid:  Finance minister was in parliament on Thursday and was asked the same question. He answered that figures don't tally. He said he was getting different figures from different departments. As soon as the FM is in a position to tell, I'll be in a better position to start comparing how much we owe to China and other countries. All we know up to now is that Yameen government has been most irresponsible in borrowing and taking us to the edge of the debt burden

WION: Your take on China's one belt and one road initiative?

WION: One country in the region continues to indulge in cross-border terror and SAARC has been defunct due to this?