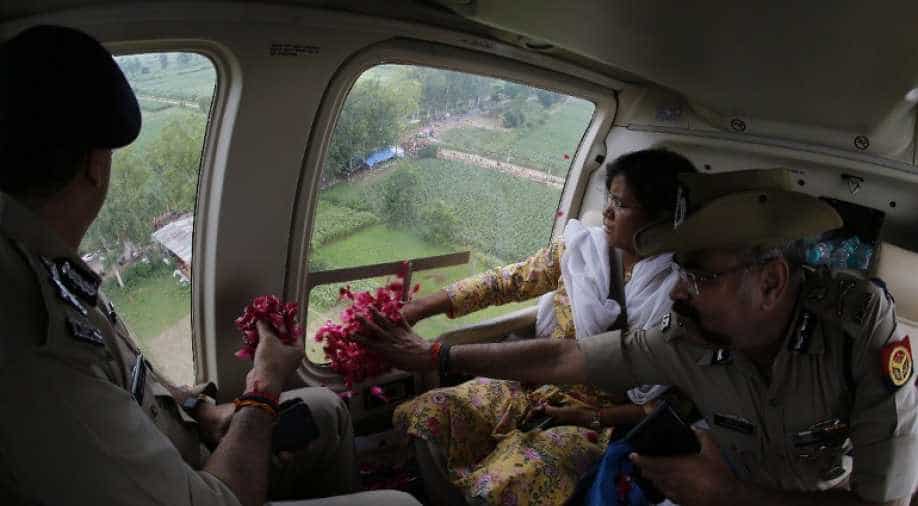 Video has emerged of senior UP police and administration officials reportedly showering rose petals on kanwariyas from a helicopter.

ANI added that Meerut Commissioner Anita Meshram and other senior officials also showered petals on the kanwariyas along with Kumar.

Kumar later said "no religious angle should be given" to the showering of rose petals by him. He added that "flowers are used to welcome people".

And that the "administration respects all religions and actively takes part, even in Gurupurab, Eid, Bakrid or Jain festivals".

No religious angle should be given to this, flowers are used to welcome people. Administration respects all religions and actively takes part, even in Gurupurab,Eid, Bakrid or Jain festivals: Prashant Kumar,ADG(Meerut Zone) on showering rose petals on Kanwariyas from a helicopter pic.twitter.com/BZKg0ri8Oz

The kanwariyas are Shiva devotees who make pilgrimages each year to Haridwar, Gaumukh and Gangotri in Uttarakhand and Sultanganj in Bihar

They are however also a nuisance on the road and have picked up a reputation for violence.

The Kanwarias have taken over Gurgaon. On NH8 they're drunk, stripping down, waving sticks at passing cars, whistling at solo women drivers. Making a mess of the roads. Skeletal @gurgaonpolice who aren't able to do much. pic.twitter.com/AXQgaXpDGr

On Wednesday, ANI had released a video of a group of kanwariyas attacking a car in Delhi.

ANI said the car had "brushed past them". It added that no one in the car was injured.

#WATCH: A group of 'kanwariyas' vandalise a car in Delhi's Moti Nagar after it brushed past them while driving. The people in the car got off safely. No injuries were reported. Police says no formal complaint has been filed by the victims (07.08.2018) pic.twitter.com/rKc6VJMZnh

They had earlier released a video of kanwariyas attacking a police jeep in Bulandshahr, UP.

#WATCH: Kanwariyas vandalize police vehicle after an altercation with locals in Bulandshahr on 7th August, police have registered a case. pic.twitter.com/UaIcNU55RV