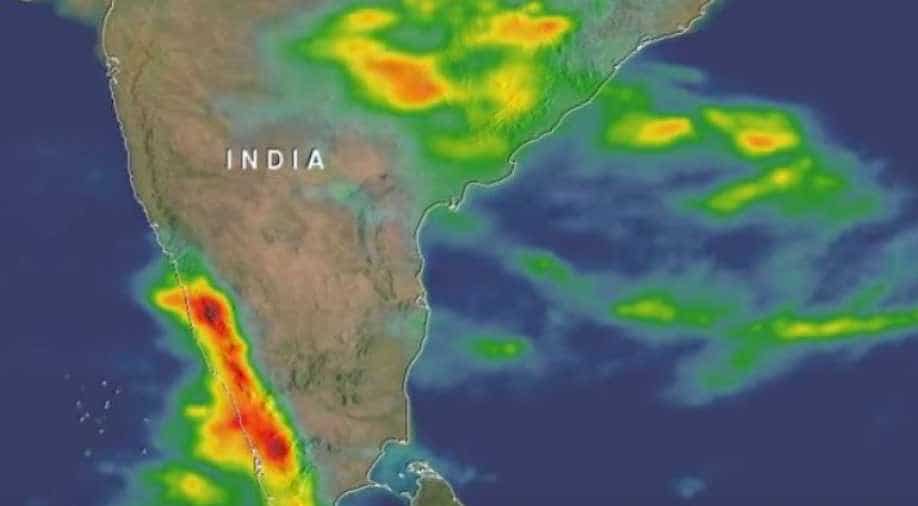 Image is a video grab. Credt: NASA video Photograph:( Others )

The video depicts the state of Kerala highlighted and subsequently go red, indicating severe rainfall and flooding in the region.

The National Aeronautics and Space Administration (NASA) has released a video that shows the rain activity over India in the past week and highlights the floods in Kerala and Karnataka.

The video takes into account the satellite image data and shows an estimate of the average rainfall across India.

It depicts the state of Kerala highlighted and subsequently going red, indicating severe rainfall and flooding in the region. The video goes on to show the monsoon activity over other parts of the country.

According to NASA, the rainfall accumulations from August 13 to 20 showed two bands of heavy rain across India.

The first band, associated with the general monsoon circulation, appeared much broader and extends across the northern part of the peninsula with weekly rainfall totals ranging from over 5 inches towards the western half of the peninsula to as much as 14 inches over parts of the eastern half towards the Bay of Bengal.

The second band appeared more concentrated and intense, closely aligned with the southwest coast of India and the Western Ghats where onshore flow was enhanced by an area of low pressure embedded within the general monsoon.

NASA attributed the heavy rains along the southwest coast of India to the Western Ghats.

NASA stated that the range is well positioned to enhance the rainfall along the West Coast of India as they intercept the moisture-laden air that is drawn from the warm waters of the northern Indian Ocean and the Arabian Sea as part of the southwest monsoon circulation.

NASA used the Integrated Multi-satellitE Retrievals for GPM (IMERG) to create the video. The technology is usually used to estimate precipitation and the data is generated every half an hour.

The technology enables scientists to track rainfall across the globe almost in real time.