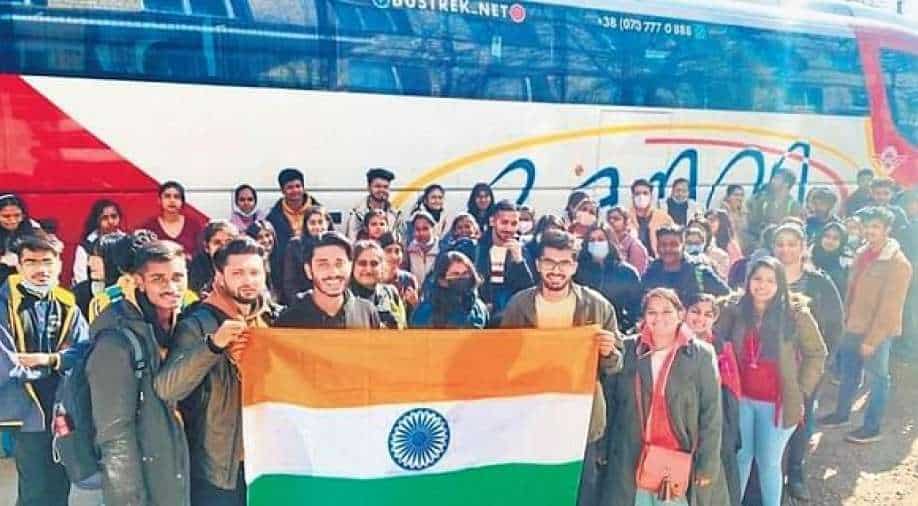 Indian students hold up the National flag as they are escorted from Ukraine to the Romanian border on Friday. Photograph:( Twitter )

An Indian student told news agency ANI that the Indian flag not only saved Indians stranded in Ukraine, but it also helped Pakistani and Turkish students fleeing the war-torn country.

The Indian students who arrived in the city of Bucharest, Romania from Ukraine said that the Indian flag helped them, as well as some Pakistani and Turkish students, safely cross the various checkpoints.

"The Indian flag was also being used by Turkish and Pakistani students, a student said, adding that the Indian flag had been of tremendous help to them as well.

A medical student from Odesa, Ukraine, stated, "In Ukraine, we were advised that if we bring an Indian flag with us, we won't have any problems."

#WATCH | "We were easily given clearance due to the Indian flag; made the flag using a curtain & colour spray...Both Indian flag & Indians were of great help to the Pakistani, Turkish students," said Indians students after their arrival in Bucharest, Romania#UkraineCrisis pic.twitter.com/vag59CcPVf

The Union Minister, G. Kishan Reddy, had previously recommended Indian students stranded in Ukraine's crisis-stricken country to fly the national flag on their vehicles to ensure a safe departure.

The students also described how they purchased spray paints from the marketplaces and used them to create an Indian flag on their own.

"I dashed inside the store and purchased some colour sprays and a curtain.After that, I cut the curtain and spray-painted the Indian tricolour on it "explained one of the students.

They didn't have much trouble at Molodova because the Indian embassy had already made the necessary arrangements.

The students also thanked the Indian embassy authorities for providing them with food and lodging as they awaited their flights back to India.