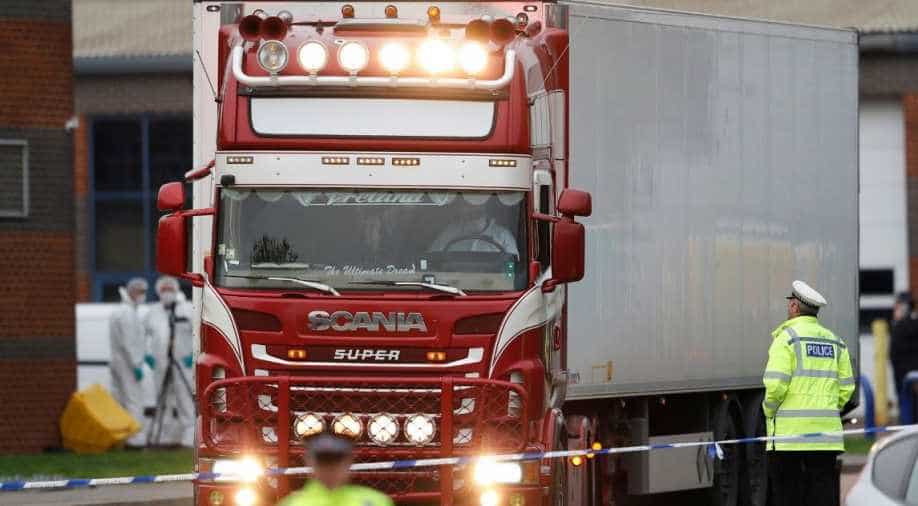 Around 39 people were found dead in a truck container outside London last week. Photograph:( Reuters )

British police have said very few of the victims were carrying official identification and that they hope to identify the dead through fingerprints, dental records and DNA, as well as photographs from friends and relatives

Britain has sent dossiers to Vietnam, seeking its assistance in identifying four of the 39 people found dead in a truck container outside London last week, the government of the southeast Asian nation said on Monday.

Lorry driver Maurice Robinson, 25, is set to appear in court charged with 39 counts of manslaughter and other offences, including conspiracy to traffic people, after the bodies were found last week in Grays, about 32 km (20 miles) east of London.

British police have said very few of the victims were carrying official identification and that they hope to identify the dead through fingerprints, dental records and DNA, as well as photographs from friends and relatives.

Son told reporters, "The Ministry of Foreign Affairs is developing dossiers of possible victims, but until now there have been no grounds to confirm Vietnamese nationals are among the victims."

Police had initially said the dead were believed to be Chinese, but it later emerged that many were from Vietnam, where communities have been plunged into despair in the belief their missing loved ones are dead.

In Beijing, foreign ministry spokesman Geng Shuang said China`s embassy in Vietnam was in close contact with the Vietnamese government about the case, but did not elaborate.

China is also asking Britain to provide more information so as to ascertain the victims` identities, he added.

In Britain, police said a man was arrested in Dublin on Saturday.
"A man arrested by the Garda at Dublin port on Saturday, 26 October, is a person of interest in our murder investigation," Essex Police said.

Three people arrested in connection with the investigation had been released on bail, British police said on Sunday. All three had been questioned on suspicion of manslaughter and conspiracy to traffic people.

About 70 per cent of Vietnamese trafficking cases in Britain between 2009 and 2016 were for labour exploitation, including cannabis production and work in nail salons, the British government said last year.

The suspected victims in the most recent incident hail from Vietnam`s northern rice-growing areas of Nghe An and Ha Tinh, two of the communist-ruled nation`s poorest provinces.

Nghe An was identified as home to many victims of human trafficking who end up in Europe, according to a March report by the Pacific Links Foundation, a US-based anti-trafficking organisation.

The other province, Ha Tinh, was ravaged by one of Vietnam`s worst environmental disasters in 2016 when a steel mill owned by Taiwan`s Formosa Plastics contaminated coastal waters, devastating fishing and tourism there.