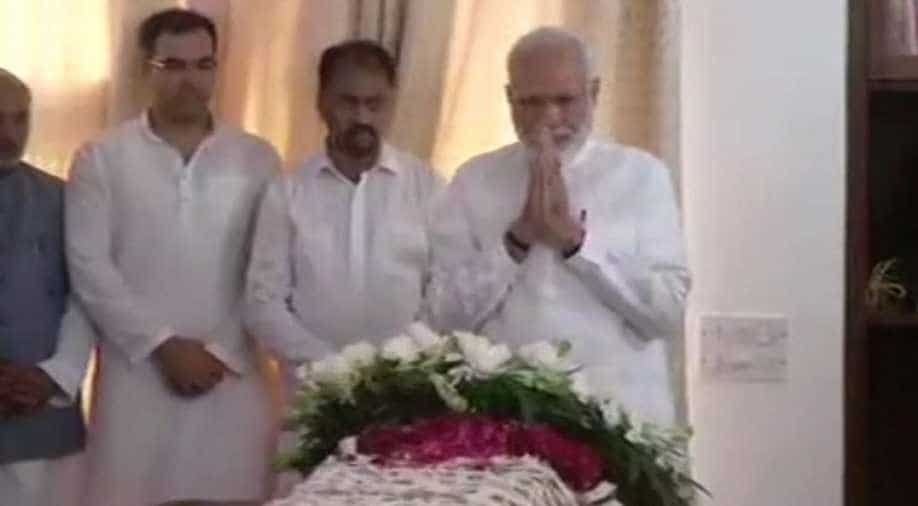 Earlier, the Indian prime minister in a tweet had said that Sushma Swaraj's demise was a "personal loss", while adding that she would be remembered for everything that she had done for India.

"A glorious chapter in Indian politics comes to an end. India grieves the demise of a remarkable leader who devoted her life to public service and bettering lives of the poor. Sushma Swaraj ji was one of her kind, who was a source of inspiration for crores of people," PM Modi had said in his tweet.

Sushma Ji’s demise is a personal loss. She will be remembered fondly for everything that she’s done for India. My thoughts are with her family, supporters and admirers in this very unfortunate hour. Om Shanti.

Sushma Swaraj had served in PM Modi's cabinet as external affairs minister throughout the NDA government's first term from 2014 to 2019. Swaraj had decided not to fight the general elections in 2019 due to ill health.

PM Modi while paying tribute to Sushma Swaraj said that she was an "excellent administrator", "prolific orator" and an "outstanding Parliamentarian" who "worked tirelessly" even when her health was not good.

"My thoughts are with her family, supporters and admirers in this very unfortunate hour," PM Modi added.

The BJP announced late on Tuesday night that the former external affairs minister would be cremated on Monday afternoon with full state honours at Lodhi crematorium in New Delhi.