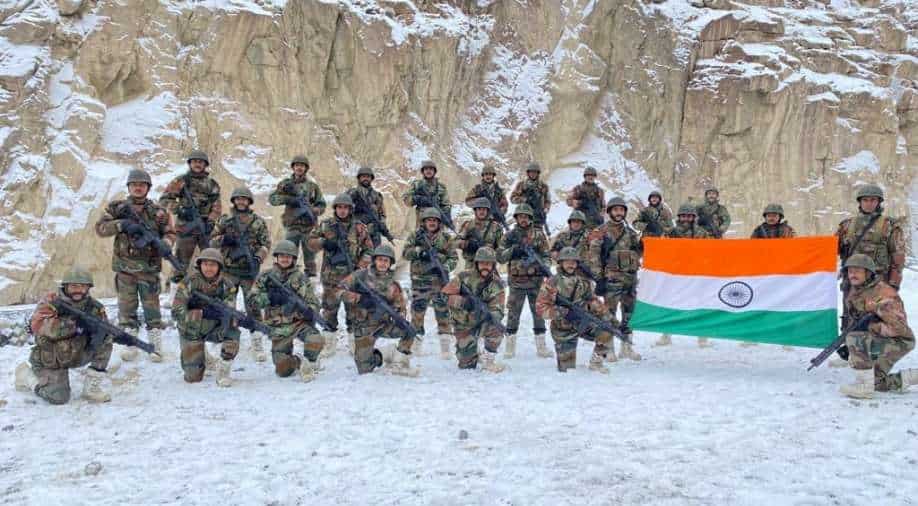 File photo: In one of the photos, released by the sources in the Indian security establishment, around 30 Indian soldiers were seen with the national flag. Photograph:( Agencies )

The China-India border stalemate, which began in May 2020, is still ongoing at numerous friction areas in the Himalayan hilly region of Ladakh. The problem has been defined by a catastrophic conflict between Indian and Chinese troops in the Galwan Valley in June 2020, which was the bloodiest combat in almost four decades and resulted in fatalities on both sides.

For the first time in nearly 45 years, a violent skirmish between Indian and Chinese troops broke out in the Galwan Valley on June 15, 2020, resulting in losses on both sides and marking a new sour turn in China-India relations. In India, the gruesome clash sparked popular indignation, and anti-China sentiment peaked. Meanwhile, alarm over the rapid deterioration of China-India relations was obvious in China.

The violent clashes, which mostly took place in and around Ladakh's Galwan Valley and Pangong Lake, claimed lives on both sides and strained an already difficult bilateral relationship.

The northern Himalayan frontiers have remained on a knife's edge since those clashes, with both sides sending substantial military contingents and erecting infrastructure to prove their cases. Simultaneously, both governments have engaged diplomatically, attempting to win as many concessions as possible while challenging claims.

The present geopolitical turbulence after the Russia-Ukraine crisis has given the India-China rivalry in Ladakh a new perspective.

The casualties in the clash

The conflict killed at least 20 Indian soldiers and an unknown number of Chinese troops, with Beijing refusing to reveal the actual number of casualties.

China, on the other hand, awarded posthumous medals to four of its soldiers who died in the Galwan conflict in February 2021.

An article in the Australian newspaper 'The Klaxon', citing a report prepared by a group of social media researchers after a year-long investigation, revealed that at least 38 PLA troops drowned while crossing a fast-flowing, sub-zero river in the dark, according to the news agency Asian News International.

The PLA has also held drills in Tibet and across the border in Arunachal Pradesh. The PLA, for example, conducted a small weapons training exercise in Shigatse, Tibet, in the first week of this month.

Chinese state media stated in early May that a PLA unit in the Xinjiang Military District of the Western Theatre Command had placed new long-range heavy rocket artillery in the border region at a height of 5,200 metres.

Several rounds of talks between both sides

The two parties have held 15 rounds of talks since the standoff began in May 2020, with disengagement on both sides of the Pangong Tso (lake) in February 2021, and from Patrolling Point 17 in the Gogra area in August, in addition to Galwan in 2020 after the brutal clash. Political and diplomatic conversations have also taken place between the two parties.

A thorough examination of China's domestic debates on India in the years leading up to and following the Galwan confrontation reveals the Chinese perspectives that underpin the border crisis. This research also provides direction for the future.

The standoff illustrates China's policy quandary with respect to India. Beijing aims to use its power and psychological advantage in bilateral relations to successfully contain a rising New Delhi. As the world's attention was drawn to the Covid epidemic, China seized the opportunity.