Aero India: Surya Kirans to not take part in memory of pilot who died in collision 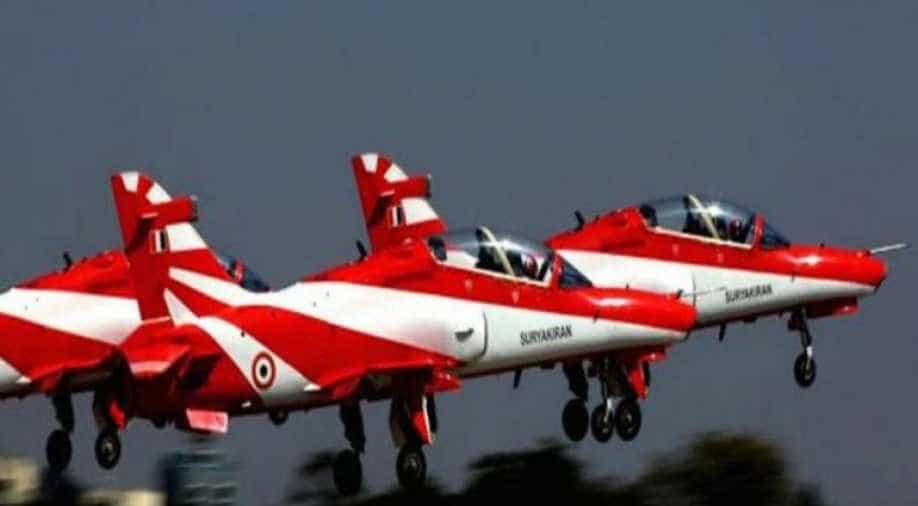 In memory and honour of Wing Commander Sahil Gandhi who lost his life in the crash, HAL-built aircraft will fly the missing man formation—Suryakiran, where three planes will fly with the right side position of the team leader, kept empty signalling the departure of their comrade.

Amid a pall of gloom after two Surya Kiran aircraft collided, which resulted in the death of a pilot, the Surya Kiran team has decided to not participate in the five-day air show Aero India 2019 which begun in Bengaluru on Wednesday.

In memory and honour of Wing Commander Sahil Gandhi who lost his life in the crash, HAL-built aircraft will fly the missing man formation—Suryakiran, where three planes will fly with the right side position of the team leader, kept empty signalling the departure of their comrade.

Bengaluru: IAF's Surya Kiran Aerobatics Team Aircraft standing with their canopies covered on runway behind the inaugural venue of #AeroIndia2019. The aircraft won’t participate in it due to the loss of two aircraft and one pilot yesterday in a mid-air collision during rehearsal. pic.twitter.com/96u9j5eTHZ

The Surya Kiran team aircraft were parked behind the runway at the Aero India venue at Yelahanka airbase of the Air Force.

Other aircraft including the foreign and Indian planes will continue their flying display at the venue and as per their plan.

Two pilots were seriously injured while one pilot was killed while rehearsing the Mirror manoeuvre, a day ahead of the Aero India show.

''There was an unfortunate incident, two aircraft collided during a mirror formation. An inquiry has been lodged. All displays except for Surya Kiran Aerobatics Team will continue as listed in the program,'' Bhadauria said yesterday.

“In cases like Surya Kiran, the risk factor is high. In this particular incident, the two aircraft were trying a mirror image. One aircraft was just above another in an inverted form. This was in close proximity. In these kinds of instances, it is not good to speculate as to what happened. It could have been operational or maybe there were birds or it may have been human error. We have to wait and see what the inquiry reveals,” he had said.

Suryakiran teams have been performing around the world on their aircraft and this is the first accident involving the team after the induction of Hawk Advanced Jet Trainers in the team.

The earlier aircraft used for the team was the Kirans which had been manufactured by the HAL, a Bengaluru-based aircraft manufacturing company.