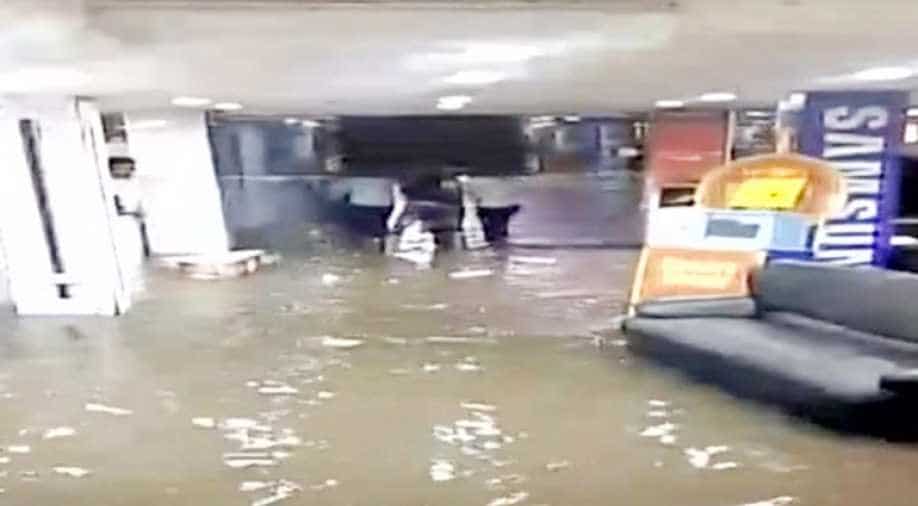 Waterlogging in an area of Hyderabad after heavy rainfall. Photograph:( ANI )

Three people, including a four-month-old child, were killed in Hyderabad after heavy rain lashed the city on Monday evening.

The downpour has led to heavy water logging in several low-lying areas with traffic disrupted in several parts of the city.

According to a Metrological official, 67.6 mm of rainfall was recorded in the city mainly due to monsoon.

All schools and colleges have been shut in the city due to the continued rainfall.

A physically challenged man and his four-month-old child died in a wall collapse, while another man, 35, was electrocuted, media reports said.

According to Sheikhpet Mandal Revenue Officer S Ramulu, the child and his father, Yadulu were buried under the debris of a wall after their thatched house collapsed at Naidu Nagar due to heavy rains, PTI quoted.

The officials said that bodies were recovered after the rescue operation. The wife of deceased Yadulu and their two-year-old daughter survived the incident.

In an another incident, a person was electrocuted after he accidentally touched a trolley which came in contact with an electric wire.

ANI reported that the person died on the spot.

Chief Minister K Chandrasekhar Rao has urged the state officials to be on alert.

The Hyderabad city police, including traffic police stations, armed reserve, home guards, special branch and other wings have been put on high alert.

They have been instructed to take an active part in flood-related emergencies and attend all emergencies in coordination with other government departments, PTI reported.

In August, Mumbai was lashed by heavy rains. Almost 14 people were killed in Mumbai after floods caused by heavy monsoon rains.

Water-logging in various parts of #Hyderabad after incessant rainfall; all schools and colleges to remain closed today. pic.twitter.com/ofS5xi4w5a