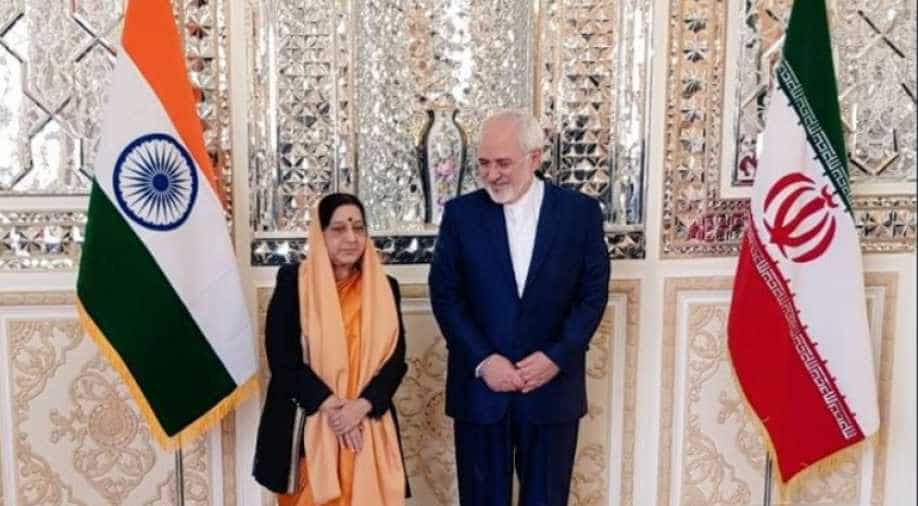 External Affairs Minister Sushma Swaraj made a stopover in Iran on her way back from Russia to meet Iran foreign minister of  Dr.Javed Zarif in Tehran.

She met the Iran minister over a luncheon meeting.

The two counterparts discussed the implementation of the Chabahar port, which is expected to boost trade relations between India, Afghanistan and Iran, an external affairs source said.

The MEA officials have said that it was a technical stopover and not a planned one.

Swaraj was on a three-day visit to Russia to attend the Shanghai Cooperation Organisation meeting.

In the SCO meeting, she had emphasised on the connectivity between the SCO countries. She said  "Connectivity with SCO countries is India's priority. We want connectivity to pave the way for cooperation and trust between our societies." "For this, respect for sovereignty is essential. Inclusivity, transparency and sustainability are imperative," she added.

She also invited the SCO members to participate in India's growth story.

"In the background of sluggish economic growth in the world, India's economic growth is expected to accelerate in the long-term and we would like the other SCO members to be part of India's growth story," "Slowdown in the world economy accompanied with increasing tide of protectionism and policy uncertainties will require measures of matching proportions,".

Talking about the connectivity between India and Afghanistan, which she termed as an important priority sector for India, she stated that the connectivity with Afghanistan had improved with the operationalisation of the Air Freight Corridor between Kabul, Kandahar and New Delhi this June.

Taking forward Prime Minister Narendra Modi's vision, Swaraj said, "I believe that this is the starting point of our journey, to realise the full spectrum of connectivity - from culture to commerce, from traditions to technology, from investments to IT, from services to strategy, and from people to politics."

The 16th Meeting of Government of Shanghai Cooperation Organisation was organised in the Sochi city of Russia.

The meeting was held on November 30-December 1.

She also attended a joint dinner hosted by Russian Prime Minister Dmitry Medvedev. The Russian PM had hosted the dinner in honour of the participants of the meeting of the council.

This was the first meeting of the Council after India became a full member of the SCO.

India and Pakistan became a full-fledged member of the SCO in June.

India's membership was backed by Russia while Pakistan was supported by China.