'Why should we be eating Maggi with lead in it?' SC asks, revives case against Nestle India 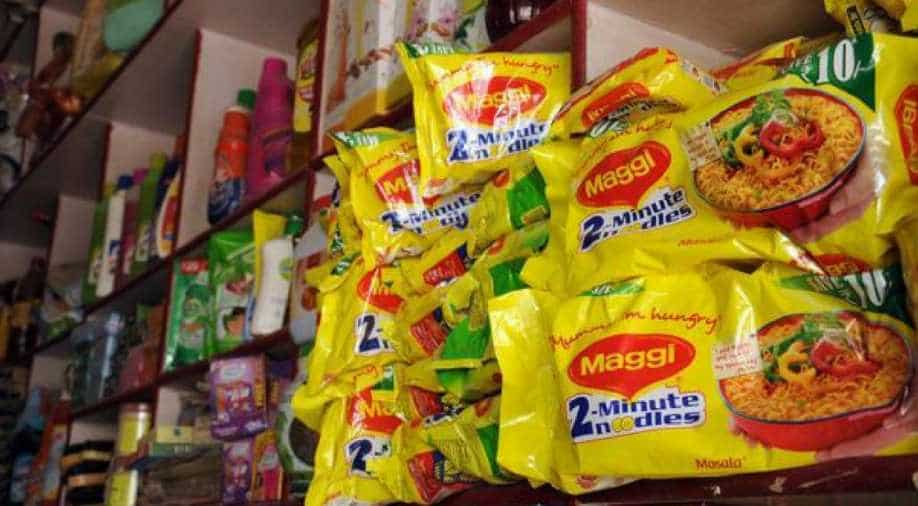 Maggi was banned by FSSAI in June 2015 for allegedly containing lead beyond permissible limits, forcing Nestle India to withdraw the product from the market. Photograph:( Twitter )

The Consumer Affairs Ministry had in 2015 filed a complaint against Nestle India before the NCDRC using a provision for the first time in the nearly three-decade-old Consumer Protection Act.

The top court had on December 16, 2015, stayed the proceedings before the NCDRC and directed the CFTRI (Central Food Technological Research Institute, Mysuru) to place its test report before it.

A bench of Justices D Y Chandrachud and Hemant Gupta was told by senior advocate Abhishek Manu Singhvi, appearing for Nestle India, that tests reports of the Mysuru lab had been submitted and it found that lead content in Maggi noodles was well within the limit.

"Why should we be eating Maggi with lead in it?", Justice Chandrachud asked Singhvi, who replied that lead content in the noodles was well within the permissible limit and there was some amount of lead in various other products.

The bench said the report of CFTRI, where the samples of Maggi noodles were tested following earlier orders of the court, will form the basis for the proceedings before the NCDRC.

"We are of the view that CFTRI report is evaluated by the NCDRC in the complaint before it. It will not be appropriate for this court to pre-empt the jurisdiction of NCDRC... All the rights and contentions of the parties will remain open," the bench said.

During the hearing, Additional Solicitor General Vikramjit Banerjee, appearing for Centre said that in the wake of the Mysuru lab report the matter should go back to NCDRC and stay on the proceedings should be vacated.

Singhvi said the matter has now become infructuous as the report is in my favour and presence of MSG (monosodium glutamate) was not found.

He along with senior advocate Arvind Dattar opposed sending the matter back to NCDRC saying nothing remains to be decided after the lab report.

"Why should we usurp the power of NCDRC. We will send the lab reports to the commission and them ask to dispose of the complaint filed before it," the bench said adding that the appeal against the Bombay High Court order which had in 2015 quashed the Food Safety Standards Authority of India (FSSAI) ban order against Nestle's Maggi noodle will be heard at a later stage.

Meanwhile, Nestle in a statement said it welcomes the order passed by the apex court.

"As per SC directives, samples were sent to the CFTRI. The CFTRI analysis showed samples were compliant for lead and other parameters," it said.

"The appeal filed by Nestlé India against the two interim orders passed by National Consumer Disputes Redressal Commission (NCDRC)  came up for hearing today. As per the lawyers who appeared for Nestle, Hon’ble Supreme court in view of reports received from CFTRI has agreed with Nestlé’s contention and has set aside both the interim orders passed by NCDRC which were challenged by Nestle. The Supreme Court has also directed that the reports received from CFTRI will be the basis for proceedings before NCDRC. Full details will be known only after receipt of the order by the Company," the statement reads.

The Consumer Affairs Ministry had in 2015 filed a complaint against Nestle India before the NCDRC using a provision for the first time in the nearly three-decade-old Consumer Protection Act.

It had filed a complaint against Nestle for causing harm to Indian consumers by allegedly indulging in unfair trade practices and false labelling related to the Maggi noodles product.

It was for the first time that the government had taken action under Section 12-1-D of the Consumer Protection Act, under which both the Centre and states have powers to file complaints.

In the petition filed before the NCDRC, the ministry had charged that Nestle India has misled consumers claiming that its Maggi noodle was healthy -- "Taste bhi healthy bhi".

Nestle had to withdraw its instant noodles brand Maggi from the market over allegations of high lead content and presence of MSG.

The food safety regulator FSSAI had banned Maggi noodles after it found excess level of lead in samples, terming it as "unsafe and hazardous" for human consumption.

FSSAI had also said Nestle violated labelling regulations on taste enhancer 'MSG' and ordered the company to submit a compliance report on its orders.