Stop dividing India and I will stop opposing you: Rahul Gandhi to PM 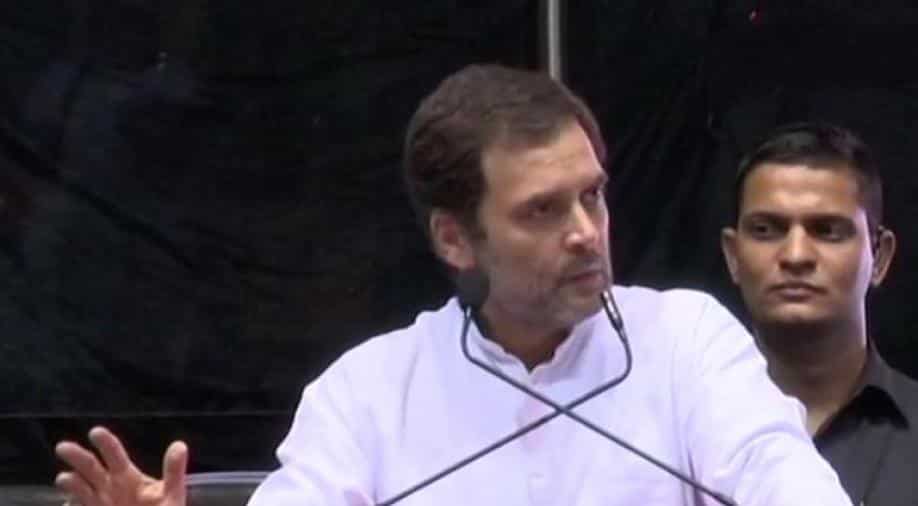 Addressing a public meeting here in Morena district, he said, "Someone said yesterday that Rahul Gandhi opposes Narendra Modi. I say that I do not oppose for the sake of opposing, there is a reason.

Campaigning for his party in poll-bound Madhya Pradesh, Gandhi again attacked Modi over his alleged proximity to businessmen, saying he worked for a handful of rich people.

Addressing a public meeting here in Morena district, he said, "Someone said yesterday that Rahul Gandhi opposes Narendra Modi. I say that I do not oppose for the sake of opposing, there is a reason.

Accusing Modi of working for "15-20" rich people, Gandhi said, "Until Modi talks about justice, waives the loans of farmers, stands with the labourers, whatever the rest of Hindustan says, Rahul Gandhi, will stand against him, because I believe you people are behind the progress of the country."

He alleged that the prime minister, in his Independence Day speech, had insulted the ancestors of those who toiled hard to build this country.

"The US president says only India and China can compete with it (America). The country was poor and hungry 70 years back. There was no city, no railway lines, no plane, no industry and the prime minister says nothing has happened in the last 70 years," the Congress president said.

He accused Modi of helping his "friends" convert their black money through the demonetisation exercise, under which high-value currency notes were scrapped in November, 2016.

"Two years ago, Modi had imposed demonetisation and made the entire country stand in queues. Did we see a Vijay Mallya or Nirav Modi or Anil Ambani in those queues?

Modi helped them convert their black money into white," he said.

He said, "Corruption is rampant in Madhya Pradesh. There is a hierarchy of corruption that reaches the chief minister and his family."

"Scams like Vyapam (a multi-crore-rupee admission and recruitment racket) have destroyed education in Madhya Pradesh and made it expensive. In the e-tendering scam, everyone knows who is involved.

"You can study for hours. But you cannot go ahead until you have money to offer, which means Vyapam. This scam has killed 50 people. The entire state knows what is the role of the chief minister and his wife in this scam," Gandhi said.

In the past, Chouhan has vehemently denied his or his family's involvement in the Vyapam scam.

Gandhi said if voted to power, his party would create jobs for the youth of Madhya Pradesh, where the Congress is in the opposition since 2003.

"The Congress chief minister will work hard for 18 out of 24 hours to create employment for the youth of Madhya Pradesh. We will not make false promises like the BJP, which had promised to give two crore jobs to the youth," he said.

The Congress chief promised to set up food processing units in every district of the state to promote the "Made In Madhya Pradesh" brand and said his party would announce farm loan waiver if elected to power.

Gandhi also addressed public rallies at Joura and Sheopur as part of his election campaign in Madhya Pradesh.

Before addressing the rallies, he visited the Bandi Chhor Gurdwara, located in the Gwalior Fort. He was accompanied by state Congress president Kamal Nath and senior party leader Jyotiraditya Scindia.

After the public meetings, Gandhi held a roadshow from Joura to Bamor in Morena district and headed for Gwalior, from where he will leave for New Delhi, concluding his two-day visit to the state.

The 230-member Madhya Pradesh Assembly will go to the polls on November 28 and the counting of votes will be taken up on December 11.