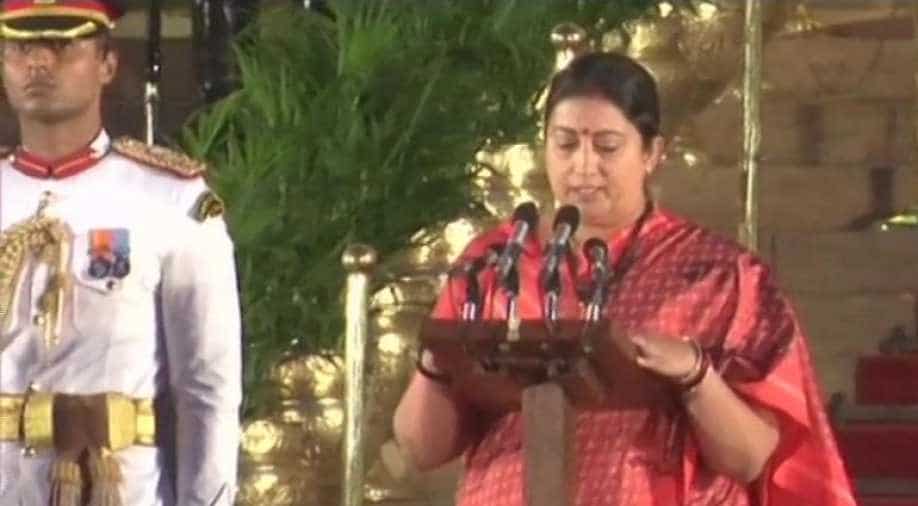 From being one of the most popular faces on the small screen to taking on Rahul Gandhi in a high-profile Lok Sabha poll battle in Amethi, Smriti Irani has come a long way.

Once television's favourite bahu, BJP leader Smriti Irani has proved her mettle in politics too. She fought the 2014 Lok Sabha elections against Congress president Rahul Gandhi from the Gandhi family pocketborough Amethi and lost by a narrow margin of over a lakh vote.

In 2019, the fortunes reversed and she emerge victorious against Gandhi, hence earning the moniker 'giant slayer'.

The win was rewarded by her party with a ministerial berth. She took oath as a minister on Thursday at the Rashtrapati Bhavan where Narendra Modi took an oath for the second innings as Prime Minister.

Her portfolio has not yet been decided. In the last tenure of Modi government, Irani served as Information and Broadcasting, Textiles and HRD minister.

From being one of the most popular faces on the small screen to taking on Rahul Gandhi in a high-profile Lok Sabha poll battle in Amethi, Smriti Irani has come a long way. She was inducted in the Narendra Modi ministry in 2014 too representing a crowning glory in her political career.

Having acquired fame as a TV actress in “saas-bahu" soap opera, Irani continued to under spotlight after she switched over from TV to politics and fought two tough electoral battles - against Rahul Gandhi from Amethi in 2014 and Congress heavyweight Kapil Sibal from Chandni Chowk in Delhi in 2004.

She was born in Delhi and had her education in New Delhi before shifting to Mumbai wher she became a household name because of her role in the TV serial Saas Bhi Kabhi Bahu Thi. Married to businessman Zubin Irani and having one son and a daughter, Smriti Irani lists reading as her past-time.