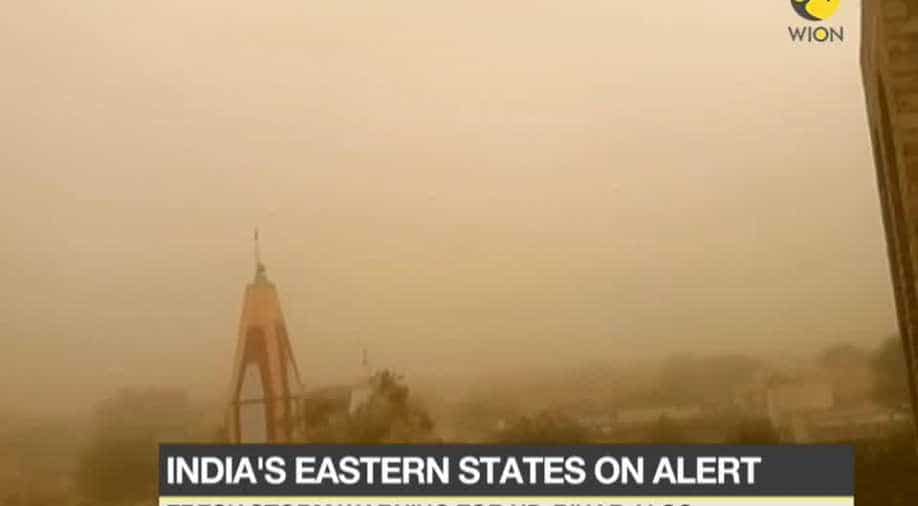 A tree falls over cars in Delhi. Photograph:(DNA)
Follow Us

A squall and dust storm with a wind speed of up to 109 kmph barrelled through Delhi and neighbouring areas on Sunday, affecting flight, rail and metro operations, uprooting trees, and leading to incidents of wall collapse.

Nine people were killed in Uttar Pradesh and another nine people have died in Andhra Pradesh and Telangana, which also witnessed a storm.

Eight including four children lost their lives due to heavy rainfall and thunderstorm in West Bengal's Howrah while two died in Delhi.

The sky turned dark grey around 4:30 pm. Gusty winds and rain lashed the national capital, causing the temperature to drop around 10 notches.

The much-needed reprieve came after a sweltering day when the maximum temperature had reached 40.60 degrees Celsius, a notch above the normal. Humidity during the morning hours was recorded at 60 per cent, a MeT official said.

The strong winds knocked down a number of trees in the city.

Operations at the Delhi airport came to a halt due to the dust storm.

At least 70 flights were diverted and more than 24 delayed, an official said.

Metro operations were affected at a number of stations on the Violet and Blue lines after trees fell on overhead electricity (OHE) wires.

A few passenger and freight trains were held up for around 25 minutes because of the disruption. The Kalka-New Delhi Shatabdi Express was also stopped near Sonepat due to the uprooting of trees.

According to MeT department officials, the Safdarjung Observatory gauged 4.2 mm of rainfall. The Palam, Aya Nagar and Lodhi Road areas recorded 0.8, 6.4 and 2.1 mm of precipitation.

The weatherman forecast partly cloudy skies and the possibility of light rainfall tomorrow.

The India Meteorological Department yesterday predicted that Uttarakhand, Jammu and Kashmir and Himachal Pradesh would witness thunderstorm accompanied by the squall.

Its forecast said parts of Rajasthan might also see the dust storm.

Thunderstorm over the northern hill-states and its effect in the plains is due to a western disturbance, the IMD said.