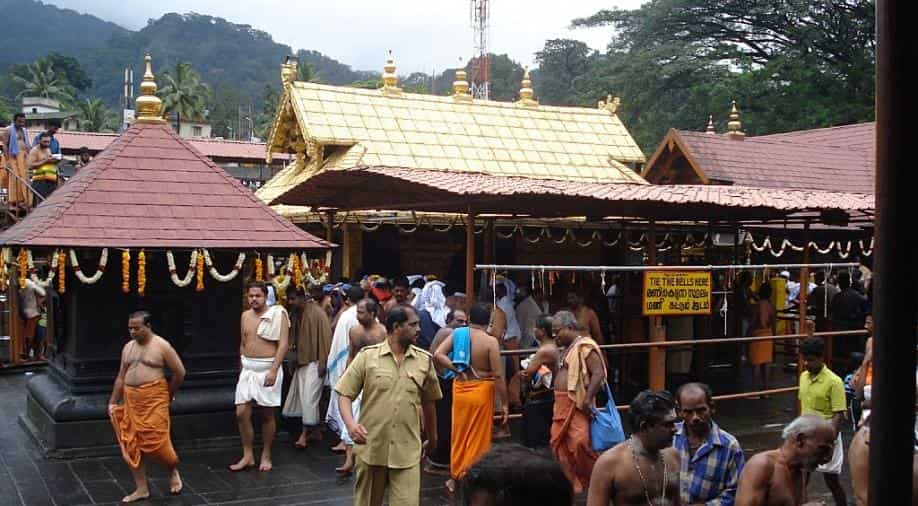 Several devotees could be seen walking to Pamba after waiting for the Kerala State Transport buses at Nilackal.Around 500 devotees, who reached Pamba after walking for several hours, blocked road traffic en-route in protest.

Hundreds of police personnel, armed commandos, surveillance cameras and mobile jammers have turned Sabarimala, the abode of Lord Ayyappa, into a virtual fortress, as it opens for a special puja on Monday.

The unprecedented security arrangements have been made in the backdrop of protests by devotees and Hindu outfits from October 17-22 opposing the Left Democratic Front (LDF) government's decision to implement the landmark Supreme Court verdict permitting women of all age groups to offer prayers at the hill shrine.

However, the security arrangements have not gone down well with the devotees and right-wing activists who protested at several places against the restrictions at Sabarimala, considered the sacred grove of Lord Ayyappa, a celibate.

Kerala: Devotees climb the sacred Pathinettam Padi to enter #SabarimalaTemple to offer prayers. The temple, which opened this evening, will be closed after the 'Athazha puja' tomorrow evening. pic.twitter.com/jfLfc0A6jt

Kerala: Devotees throng #SabarimalaTemple after its portals opened this evening. The temple will be closed after the 'Athazha puja' tomorrow evening. pic.twitter.com/1RwqqyeMDp

The temple opened at 5 pm and will close at 10 pm for the "Sree Chitira Atta Thirunal" puja slated for Tuesday, marking the birthday of the last king of the princely state of Travancore, Chithira Thirunal Balarama Varma.

The government and police machinery are on high alert to avoid any untoward incidents in and around the shrine, where ban orders under CrPC 144 are in force till Tuesday night.

Pathanamthitta Superintendent of Police T Narayanan had Sunday said that all arrangements have been made for devotees to ensure smooth 'darshan'.

Around 2,300 personnel, including a 20-member commando team and 100 women, have been deployed for the security of the devotees.

At least 15 women police personnel, who are over 50 years of age, have been deployed at the 'Sannidhanam' (temple complex), police said.

TV footage showed devotees locked in a war of words with police at several places along the route from Nilackal to Pamba, the key base camps on way to the shrine.

Besides being unsettled by the intense checking by the police, the pilgrims also complained about the lack of amenities at the base camps, which had witnessed widespread damage during the August deluge.

A group of devotees, who arrived at Erumeli since Sunday evening, protested this morning when they were not allowed to leave for Pamba. They blocked road traffic chanting 'Ayyappa Saranam' mantra.

Another batch of devotees complained that women police personnel asked their names and identity cards while travelling to Pamba in a state-run bus.

"They stopped the bus and asked our names and demanded that we show the identity cards. I said my name is Ayyappa... everyone in our group said the same (as the Ayyappa devotees are called).

"In Sabarimala, everyone is Ayyappa... devotees call each other as swamy," a devotee, carrying the sacred 'irumudikettu' (offerings to Lord Ayyappa) on his head, told a TV channel.

Another young devotee said he was not allowed to chant 'Swamiye Saranam Ayyappa' by the security officials.

Several devotees could be seen walking to Pamba after waiting for the Kerala State Transport buses at Nilackal.

Around 500 devotees, who reached Pamba after walking for several hours, blocked road traffic en-route in protest.

Media personnel were also not allowed to leave Nilackal for Pamba, the last entry point, and 'Sannidhanam' in the morning but the restriction was lifted later.

Some women journalists proceeded to Pamba with a police escort.

Hindu outfits, agitating against the entry of women of menstrual age into Sabarimala, Sunday had urged media houses not to depute women journalists under 50 to cover the issue.

A series of surveillance cameras have been installed at several points in an around the temple complex.

Local TV channels reported that mobile jammers have been installed in front of the room of 'tantri' (head priest), Kadararu Rajeevaru at the temple complex and some other places.

They also said police have restrained the priest from speaking to media.

Police have already prepared a registry of right-wing activists who are likely to reach the shrine to take part in the agitation against the entry of young women.

The BJP and various Hindu outfits are on a warpath against the Left-front government over its decision not to seek a review of the top court verdict lifting the ban on entry of women in 10-50 age group.

So far, 3,731 people have been arrested and 545 cases registered in connection with last month's protests and violence.

Around a dozen women in the age group of 10-50 were prevented from reaching the temple and police and the agitators fought a pitched battle last month over the LDF government's decision to implement the court order.