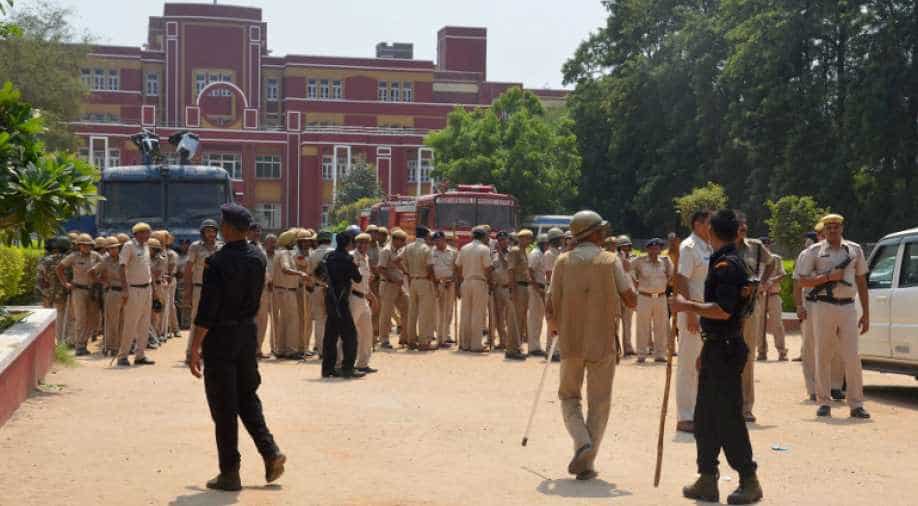 The CBI says it zeroed in on the accused teenager after inspecting CCTV footage, call records, questioning of staff and students and the 'suspicious' behaviour of the accused during investigations. Photograph:( PTI )

The father of Pradyuman Thakur, the Class II student of Gurugram's Ryan International School who was murdered inside the school premises has asked for the main accused in the case, a Class XI student who is reportedly a little above 16 years, to be tried as an adult.

Pradyuman's father Barun Thakur told The Times of India (TOI) that the teenager detained by the Central Bureau of Investigation (CBI) should be tried as an adult. He believes only a criminal mind could have carried out the crime. He added that if the teenager was tried as a juvenile, then the school should be prosecuted as well.

The CBI produced the teenager before the Gurgaon juvenile court yesterday which sent the boy to a correction home in Faridabad, TOI reported. He was taken to the CBI headquarters for questioning today.

The court has allowed the CBI to question the student from 10 am to 5 pm over a period of three days. The student will again be produced before the court on Saturday.

Barun Thakur told the Times of India that he found it hard to believe that the accused murdered Pradyuman because he wanted exams to be postponed. He also said that he had doubted that the bus conductor who was arrested the day Pradyuman was murdered on September 8 had committed the crime which is why he had asked for the CBI to take over the case from the Haryana Police.

Advocate Harish Malhotra says that if the CBI proves the teenager is above 16, he will face trial as an adult.

"A Class XI student or a person above 16 years is capable of committing a heinous offence," the advocate told The Times of India.

After the Nirbhaya gangrape in 2012, in which one of the attackers was a minor, Parliament passed an amendment to a law which now allow juveniles aged between 16 and 18 accused in heinous crimes to be tried as adults.

The CBI, which detained the accused yesterday, said he allegedly committed the crime as he wanted to get a parent teacher meeting and an examination postponed.

A CBI officer told TOI that the accused bragged to students that he would get the exams postponed so that they did not need to study.

The investigating agency says it zeroed in on the teenager after inspecting CCTV footage, call records, questioning of staff and students and the "suspicious" behaviour of the accused during the probe.

Sources told TOI that half-yearly exams were being conducted during the time that Pradyuman was murdered.

The accused bus conductor, Ashok Kumar, earlier confessed that he murdered the child after attempting to sexually assault him. His wife claims he has been forced to make the confession. The CBI has still not given a clean chit to the conductor.