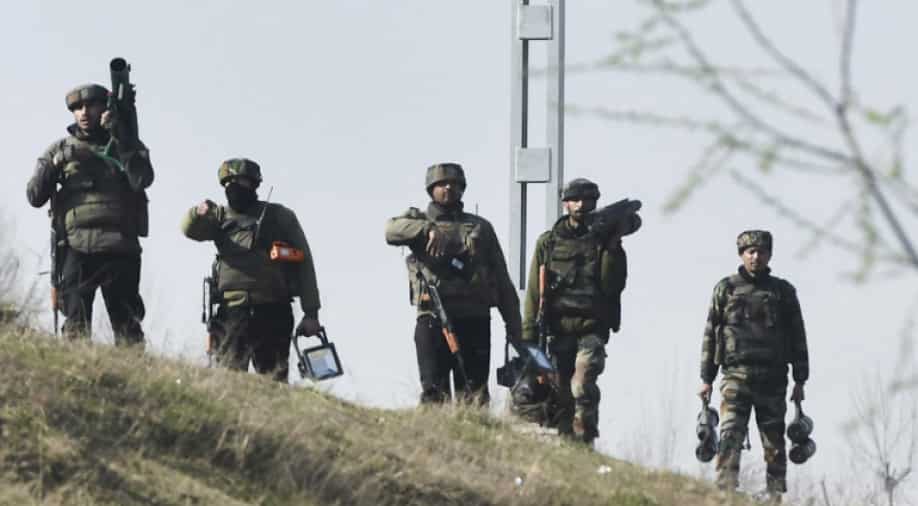 Indian army soldiers walk back along a railway track following a gunbattle between suspected militants and government security forces in Nowgam area on the outskirts of Srinagar Photograph:( AFP )

He said that it's definitely a challenge, but the Indian Army is all ready to tackle any such issue. According to the Indian army, equipments from Afghanistan have been recovered near the Line of Control and in a few encounters as well. The Indian army had found some night vision devices and satellite phones.

Sources in security said that traces of satellite phones being used by terror groups have been found in the Kashmir region and are sent to the National Technical Research Organisation for analysis.

"There are equipment and weapon systems that are used around the world that have found a way inside. It's definitely a challenge, but we have also changed our rules of engagement and procedures to contest that point. They have been found. They are not in large numbers, but there are signatures and we have recovered them in some encounters and some on the Line of Control, so it's not a big challenge. We have been able to work around that system. " said General officer Commanding (GoC) of the Srinagar-based Chinar Corps, Lieutenant General Devendra Pratap Pandey.

"These terrorists were quiet. They were putting the local terrorists as the face of terrorist activities." As the numbers of local terrorists started coming down, they are getting exposed and are compelled to come out of hiding to carry out terror activities against the locals and no locals of the valley. ''Said General Officer Commanding (GoC) of the Srinagar-based Chinar Corps, Lieutenant General Devendra Pratap Pandey.

The Indian army says there has been only one infiltration attempt made by terrorists from across the border, but it was foiled. The security grid on the LoC has been made full proof.