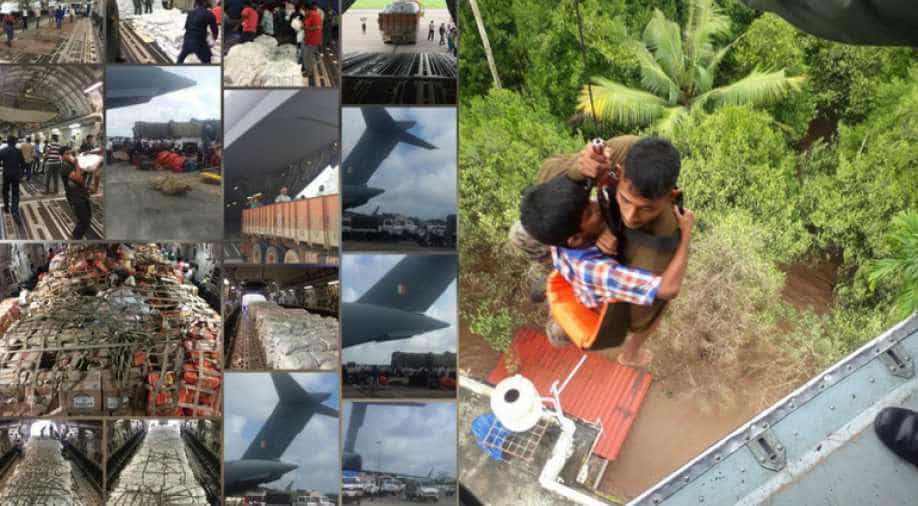 The relief and rescue operation by the Indian Air Force continued all across the flood-hit state of Kerala.

Since Wednesday, the IAF has flown scores of sorties, hoisting more than 537 forlorn civilians from inundated neighbourhoods to relatively high-ground.

Men from the special forces unit of the Indian Air Force, the Garud commandos, flew on board the helicopters with Army specialists for rescue missions. They abseiled down the copters to reach stranded persons, whom they helped hoist up using high powered winches.

Airfields of Sulur, Trivandrum and Kochi (Garuda) have been the centre of flying activity with extensive dawn to dusk operations. Additional helicopters are now also positioned and operating from Pallakad to facilitate quicker responses to remote areas.

Meanwhile, fixed-wing aircraft continue to induct heavy supply of relief material which is being distributed through the state administration. So far a total of 90 sorties by various fixed wing aircrafts have been flown and 458 tonnes of load have been deployed.

Air Marshal B Suresh AVSM VM, Air Officer Commanding-in-Chief, Southern Air Command flew on board a MI-17V5 helicopter to oversee the situation over the flood-affected areas.

The AOC-in-C in a statement emphasized that the IAF would continue relentless efforts to help the Kerala State Civil Population tide over this calamity till normalcy is restored.

A red alert has been issued for three districts in Kerala including Pathanamthitta, Idukki, Ernakulam for Sunday.

The Centre has announced a package of Rs 500 crore as immediate aid, in addition to Rs 100 crores announced on August 12, after Prime Minister Narendra Modi on Saturday conducted an aerial surveillance to ascertain the extent of the devastation.

The Navy, Army, Air Force, Coast Guard and NDRF have been working relentlessly on the ground for the past two weeks after heavy rainfall and massive landslides shattered ‘God’s Own Country’ on August 8.