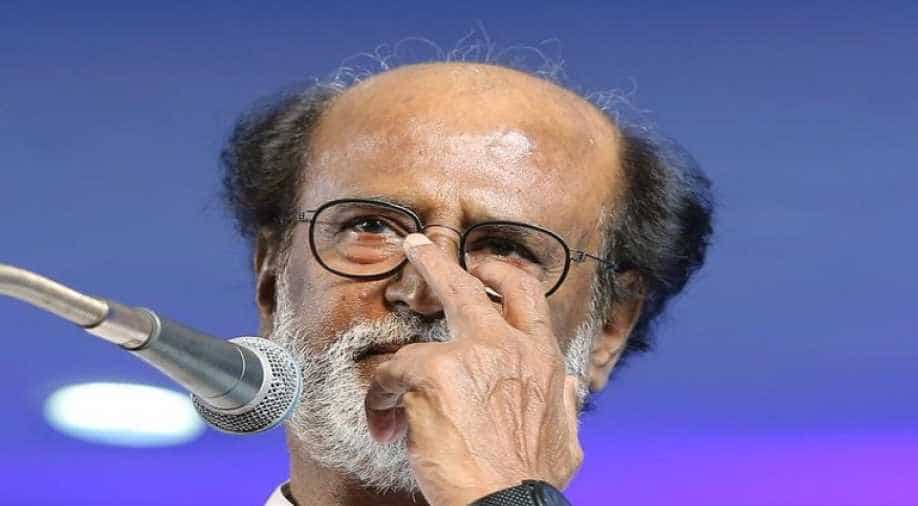 Rajinikanth's political plunge comes at a time when TN is passing through a state of flux with the death of Jayalalithaa last year and wheelchair-bound nonagenarian DMK patriarch M Karunanidhi's virtual retirement owing to age-related issues Photograph:( Reuters )

Superstar Rajinikanth who rode to stardom with his unique acting style that cast a spell on people cutting across barriers has come a long way from a humble beginning to his much delayed political plunge.

Shivaji Rao Gaekwad rechristened Rajinikanth on screen is set to unveil his brand new theme of spiritual politics as he seeks to follow in the footsteps of his illustrious seniors in the industry such as M G Ramachandran and Jayalalithaa, who rose to rule the state after successful film careers.

The 67-year old actor, who has been keeping everyone in suspense on his political entry for the past over two decades, has chosen to make the much-awaited announcement today, saying he would form a party ahead of the next assembly elections.

His political plunge comes at a time when Tamil Nadu is passing through a state of flux with the death of Jayalalithaa last year and wheelchair-bound nonagenarian DMK patriarch M Karunanidhi's virtual retirement owing to age-related issues.

Born on December 12, 1950, to Ramabai and Ramoji Rao Gaekwad couple in Karnataka, Rajinikanth tried his hand at several odd jobs before landing as a bus conductor.

To chase his dream of acting, he had quit as a conductor in then Bangalore Transport Service's "10 A" bus route.

The first movie offer came to him when he was in the Film Institute here where he was spotted by noted director K Balachander, credited with introducing several actors who made it big in filmdom.

He made his celluloid debut in 1975 in Tamil film "Apoorva Ragangal", a family drama directed by Balachander who gave him the screen name Rajinikanth.

In his very first appearance, Rajinikanth exhibited some uniqueness in doing even the most mundane things like opening a gate with his leg while smoking a cigar, indicating he was a star to reckon with.

He gained immense popularity with his unique style which included popping cigarettes into his mouth with ease and one-liners such as "Idhu eppadi irukku" (How is it?) in his formative years film "16 Vayadhinile".

After starting with negative image characters, Rajinikanth exploded into the Tamil film world as his potential as a hero came to the surface a few years later.

His fan following kept swelling and scenes of 'milk bath' of his life-size cutouts and bursting of crackers became synonymous with the release of his films most of which went on to become box office hits.

A Padma Vibushan awardee, a honour he received last year, Rajinikanth has to his credit over 150 films, including some in Hindi and Telugu.

If movies like 'Billa', "Aarilrundhu Arubathu Varai' and 'Murattu Kaalai,' (during his formative first ten years) dramatically improved both his performance and rating as a top hero, later flicks like 'Padayappa,' 'Annamalai,' 'Arunachalam,' helped him become the ultimate 'superstar'.

Notably "Muthu," became a hit even in Japan bringing him Nipponese fans.

The cult image he had developed over the years gave away for expectations among his die-hard fans of his political foray though he appeared reluctant apparently knowing that not all matinee idols replicated their reel success in politics.

Top yesteryear star and a contemporary of MGR, Shivaji Ganesan's debut in politics turned out to be a nightmare as he was trounced in his home Thanjavur District in 1989.

Many of Rajinikanth's later films were sprinkled with "punch dialogues", apparently aimed at the masses.

A dialogue in one of his films "Muthu" (1995) which translated "none can predict when and how I will come, but will arrive at the right time" became a rage and further fuelled hopes of his fans.

Rajinikanth's other famous punchlines including "En vazhi thani vazhi" (my way is a unique, separate way) (Padayappa), "Andavan solran Arunachalam Seiyaran (God directs me, I do it, -- Arunachalam) contributed immensely to his mass appeal.

For the first time, he had a taste of politics when he famously voiced his opposition to Jayalalithaa in 1996 and conversely supporting the then DMK-led coalition which captured power in the state that year.

Though the actor's opposition to Jayalalithaa was hyped by his fans as a prime factor for DMK's success in the hustings in 1996, his declaration that he will vote for the BJP-led front in 2004 Parliamentary polls did not have any bearing.

Rainikanth had said his move to support the front was based on an assurance given by the National Democratic Alliance that it would strive for linking all rivers.

A spiritually inclined person, Rajinikanth has survived a serious ailment in 2011, which he referred to in his ongoing interaction with fans here yesterday and said because of their prayers to God he was alive.

Despite Rajinikanth's stature, he is not without opposition in Tamil Nadu. Fringe pro-Tamil outfits, oppose him for his Marathi roots and previous Karnataka domicile.

The actor had also often been targeted for allegedly not fighting for the state's lifeline issues such as Cauvery water row with Karnataka.

Every time, the Cauvery issue erupted, the pro-Tamil outfits used to target him for his "silence," in the matter.

Seeking to counter such attacks, in 2002 the actor had said he would start a people's movement the Cauvery issue stressing on interlinking of Himalayan and peninsular rivers.

The actor had also said some months ago said he was a "Pachai Tamilan." (A pure Tamil).

Pointing to living in Tamil Nadu for over four decades patronised by the people, he had said that his father was born in Tamil Nadu's Krishnagiri district.

Rajinikanth married a Tamil Brahmin woman Latha and has two daughters Aishwarya and Soundarya, who have also entered the film world as directors.