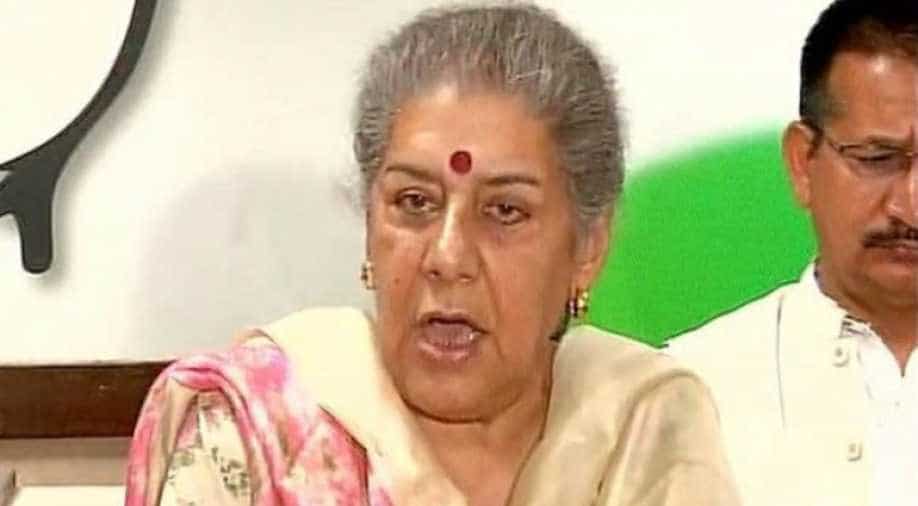 Scotching rumours of government formation with the PDP, Congress general secretary Ambika Soni told WION that there is no question of the Congress forming a government with the PDP in Jammu and Kashmir. “The matter has not been discussed at any level. It is not on the table and what is being said is pure speculation,” she said.

Soni is the Congress' in charge of J&K.

Sources in the Congress said the PDP has lost political capital and that the Congress will not try to form a government in the current scenario or at least in the present assembly as it would adversely affect the party.

On Monday, the Congress' Kashmir Group met under the leadership of former Prime Minister Manmohan Singh. Issues related to J&K were discussed at the meeting.

It was decided by the group to immediately dispatch a delegation to Kargil and Leh to discuss issues faced by the party's workers. Soni herself will be flying to J&K on Tuesday to meet a 100-odd functionaries of the state.

WION was told that the Kashmir Group reviewed the political situation in the state and decided to project development work which had been achieved by the Congress regime.

“The idea is that people should be able to judge which government did a better job,” said a leader who attended the meeting. He added that the Congress leadership understands that the ground situation deteriorated under PDP-BJP rule and that they must utilise the time available because of President’s rule to reconnect with the people and energise their cadre for a future election.

When asked about probable alliances with likeminded parties in JK on the lines of the Grand Alliance, Ambika Soni said, "Mahagathbandhan was a political initiative taken by Sonia Gandhi. It is not at my level that an issue like this would be decided but I do think that anti-BJP vote must be consolidated by the Congress. But this is for Congress President Rahul Gandhi to decide and not by a general secretary of the party.”

The sources added the Congress understands the National Conference too has sought elections in the state and that the Congress must meet its former ally from a position of strength pre- or post-polls. It is for this reason that the Congress Party has become very active once again in Jammu and Kashmir.