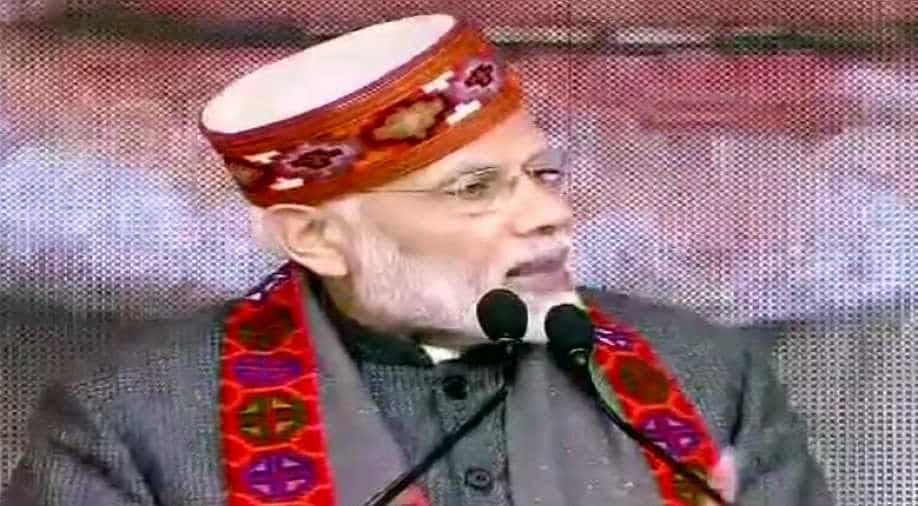 PM Modi described Himachal Pradesh as the land of brave soldiers who were ever ready to make supreme sacrifices at the border.

Prime Minister Narendra Modi said on Thursday that development projects worth Rs 26,000 crore were under way in various sectors in Himachal Pradesh.

Addressing a 'jan abhaar' rally to celebrate one year of the Jai Ram Thakur-led BJP government in Himachal Pradesh, the prime minister also said the state was like home and he had learnt a lot while travelling through it.

He described Himachal Pradesh as the land of brave soldiers who were ever ready to make supreme sacrifices at the border.

PM Modi in Dharamshala,HP: For forty years, our ex-servicemen asked for 'One Rank, One Pension'. The previous government allocated just Rs. 500 crore for it. But when we came to power, we implemented OROP and ensured welfare of our ex-servicemen pic.twitter.com/jnKk0tNYy6

Congratulating Thakur on completing one year as chief minister, Modi said, "Himachal Pradesh is like my home. I worked here for several years for the party's organisational work."

The prime minister will release a booklet on the achievements of the BJP government.

Modi went through an exhibition put up by the state government to showcase benefits of state and centre sponsored schemes for the general public.