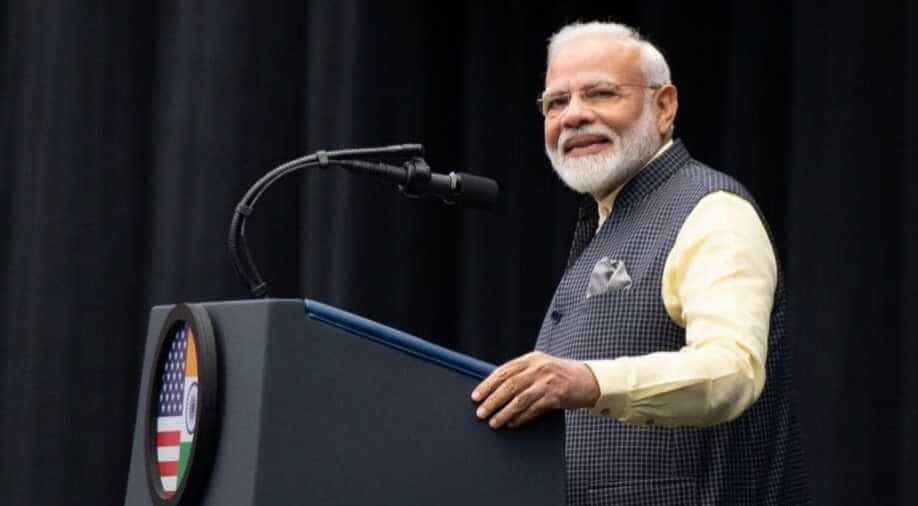 Both sides will be signing the Strategic Partnership Council - SPC MoU -which will be headed by PM Modi and the crown prince.

Prime Minister Narendra Modi will be leaving for Saudi Arabia tomorrow. The focus of his visit would be on energy, launching RuPay card in the kingdom and a speech at the 3rd Future Investment Initiative Forum which is also known as the "Davos of the desert". On Tuesday, PM Modi will hold a bilateral meeting with King Salman of Saudi Arabia and separate delegation-level talks with Saudi Crown Prince Mohammad bin Salman.

Both sides will be signing the Strategic Partnership Council - SPC MoU -which will be headed by PM Modi and the crown prince. India and Saudi Arabia will also have two verticals at foreign ministers' level and trade ministers' level. Under the vision 2030, Saudi Arabia has selected 8 countries for forging strategic partnerships. The countries include India, China, UK, US, France, Germany, South Korea and Japan. The SPC was agreed upon in February this year and aims to monitor the strategic partnership between both countries.

The highlight of the visit will be PM Modi's speech at the Future Investment Initiative (FII) Forum in Riyadh. The prime minister will be attending the third session of the investment meeting and will deliver the keynote address. The FII is organised by the kingdom’s Sovereign Wealth Fund – the Public Investment Fund and is organised under Saudi King's vision 2030 which sees the economic transformation of the country from an oil-based economy to a more diversified economy. It was first organised in 2017.

Energy remains the main component of the visit with India importing 18 per cent of its crude oil requirement from the West Asian country.

TS Tirumurti, secretary economic relations, Ministry of External Affairs said, "We also hope to sign an MoU on a joint venture between Indian Oil Middle East with Al-Jeri company of Saudi Arabia for downstream cooperation for inter-alia setting up retail outlets in Saudi Arabia. Energy security has been the main area of India’s engagement with Saudi Arabia. We are well on our way to transforming the buyer-seller relationship in this sector into a much larger strategic partnership."

Saudi Aramco, UAE's ADNOC and Indian public sector oil companies are jointly developing $44 billion worth "west coast refinery" in Raigad, Maharashtra which is the single largest greenfield refinery in India. Saudi company Al fanar is currently executing a 300 MW wind power project in Kutch, Gujarat. Indian company Reliance announced that Saudi Aramco, one of the most valuable and profitable companies in the world, will take over 20 per cent share in RIL oil and chemical business at a value of a whopping $75 billion. Saudi Arabia is also looking to participate in India's strategic petroleum reserves.

To help the Indian community in the kingdom, India will be launching RuPay card. Saudi Arabia is the third country in West Asia after Bahrain and UAE to get the facility.

"An MoU is likely to be signed during the visit to launch the Rupay card in Saudi Arabia which will be very useful for not only the large Indian community but also to Haj and Umrah pilgrims, "TS Tirumurti said.

The Indian community in the kingdom has over 2.5 million people who send back $11 billion in remittances and with an increase in Haj quota to 2,00,000 from 1,750,25, the people-to-people connect between the two nations have strengthened. Around 7,00,000 Indians visit kingdom for Umrah each year. For the welfare of the Indian workers, PM Modi will launch the integration of e-migrate system which will be aligned with the Saudi counterpart to safeguard employment conditions. India and Saudi Arabia will also sign an MoU to increase the quota for flights between the two countries. During Crown Prince's February visit, India had agreed to an increase of 8,000 seats per week.

India and Saudi Arabia are increasingly cooperating on defence with a special focus on maritime security in the Indian ocean. The first India Saudi Arabia Joint Naval exercise will be held by the end of December this year. India has been training Saudi defence personnel. New Delhi is also leveraging its expertise in cyberspace with Saudi officers being given training in cybersecurity at the Gujarat Forensic Science University in Gandhi Nagar. The Saudi Royal Navy had visited India in August this year and visited the information fusion centre of the Indian Ocean region set up by the Indian Navy.

Saudi Arabia, the UAE and Jordan are the three countries in West Asia who have increased engagement with New Delhi. India says Saudi Arabia "has shown understanding of the recent developments" of revoking the special status for Jammu and Kashmir. Secretary, economic relations said, Riyadh's stand "has had a salutary effect on Pakistan"

On terror, Tirumurti said, "no doubt that both our countries are equally concerned about terrorism and you’d also recall that India itself had condemned the missile and the drone strikes on inter-alia the Saudi oil installations and facilities. So, therefore, terrorism has been an important aspect of our discussions and our cooperation." Saudi Arabia had condemned the Pulwama and Uri attacks.

'Hamin', is an Arabic word for intimate friend and both India and Saudi Arabia aim to become one. This will be PM Modi's second visit to Saudi Arabia since 2016 and comes months after Saudi Crown Prince Mohammad Bin Salman's visit to India. During the 2016 visit, PM Modi was conferred the highest civilian award of the kingdom - King Abdul Aziz Sash. Saudi Arabia has announced it will invest up to $100 billion in India. Trade between the two countries grew by $24 billion in the last year and stands at $34 billion. There are around 322 Indian companies in the kingdom such as L&T, Wipro, TCS and startups like PayTM, OYO, among others. Last year, India was the guest of honour at the 32nd edition of the Saudi national festival of heritage and culture 'Janadriyah' wherein the then External Affairs Minister late Sushma Swaraj participated. Yoga, as a "sports activity" was allowed in the country in November 2017 and since then has been gaining popularity.