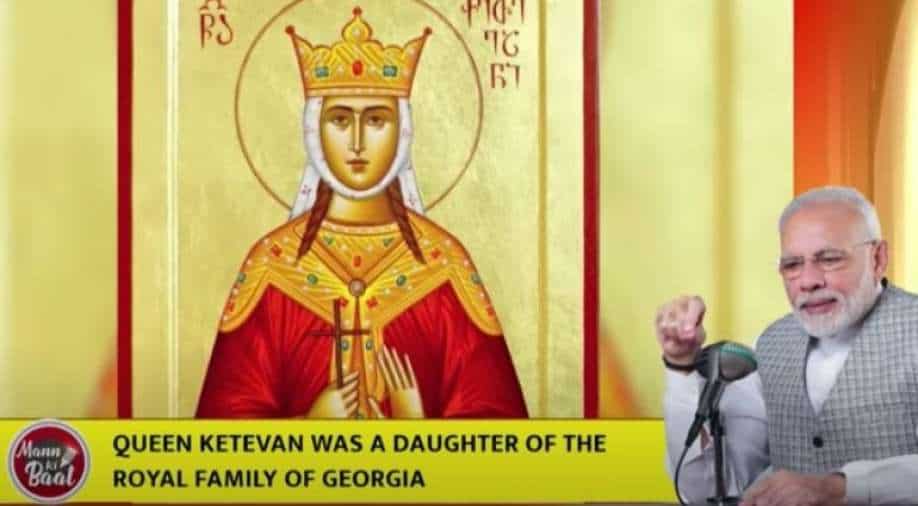 Prime Minister Narendra Modi on Sunday shared how Indian researchers in 2005 uncovered the relics of a 16th-century Georgian queen, Ketevan the Martyr, from the Saint Augustine Church in Goa.

Indian Prime Minister Narendra Modi on Sunday paid tributes to Georgia's Saint Queen Ketevan during his monthly Mann ki Baat programme, pointing out how "extremely emotional" the people of the country are for her.

External affairs minister Dr S Jaishankar had visited the country earlier this month and handed over the relics of St Ketevan who was martyred in Iran in 1624.

Recalling the "very interesting and very emotional event" of handing over the relics, Modi said the development imparts "new strength to India-Georgia friendship" and the "words that were said in praise of India in this ceremony are indeed very memorable."

The ceremony that took place at the Sameba Holy Trinity Cathedral saw the participation of Georgia's top political and religious leaders including the President, PM, and His Holiness and Beatitude Ilia II, the Catholicos-Patriarch of All Georgia.

St Queen Ketevan's relics were found in St. Augustine Convent in Old Goa, India in 2005. DNA analysis by the CSIR-Centre for Cellular and Molecular Biology, Hyderabad at the instance of the Archaeological Survey of India confirmed its authenticity. It is believed her relics were brought to Goa in 1627.

Modi said the "ceremony has not only strengthened the relations between the two nations but as well as between Goa and Georgia."

The relics have reached Georgia back after more than 390 years. In the past, in September 2017, relics were sent to Georgia for almost a year and were returned to India in September 2018.

Lauding Goa, the PM said, "I would like to thank the people of Goa for preserving this unique side of the shared history of India and Georgia. Goa has been the land of many a great spiritual heritage. Saint Augustine Church is a UNESCO's World Heritage Site – a part of the Churches and Convents of Goa."

EAM's visit was the first visit by an Indian external affairs minister to the country since it became independent in 1991. Georgian Foreign Minister Irakli Menagarishvili and External Affairs Minister Jaswant Singh had met in New Delhi on 11 May 2000.