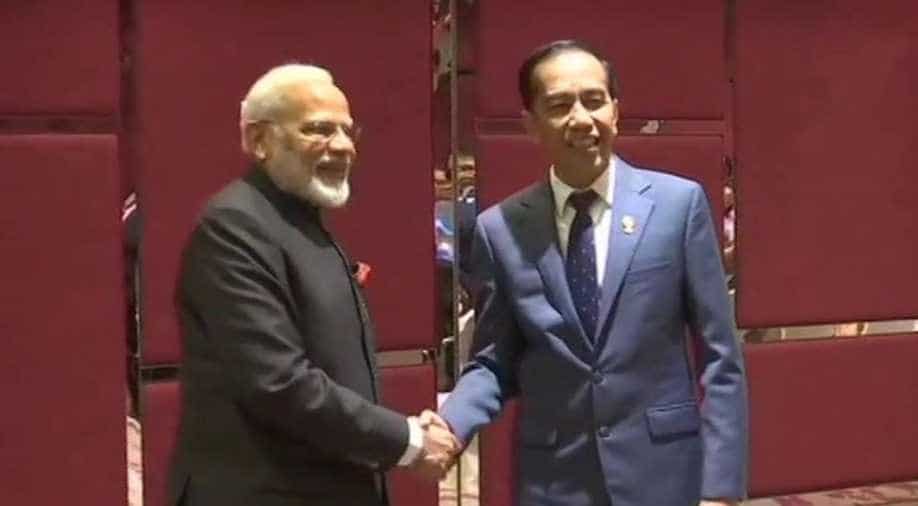 The two leaders discussed the threat of extremism and terrorism and agreed to work closely, bilaterally and globally, to tackle this menace, according to a report.

Indian Prime Minister Narendra Modi and Indonesian President Joko Widodo discussed the threats of extremism and terrorism during a bilateral meeting in Bangkok on Sunday on the sidelines of ASEAN summit.

Modi congratulated the Indonesian President as he begins his second term as president and conveyed that as two of the world`s largest democratic and plural societies, India is committed to working with Indonesia to strengthen ties in the areas of defence, security, connectivity, trade and investment and people-to-people exchanges.

"Noting that India and Indonesia are close maritime neighbours, both leaders reiterated their commitment to work together for peace, security and prosperity in order to achieve their shared vision on maritime cooperation in the Indo-Pacific region," an official statement said.

The two leaders discussed the threat of extremism and terrorism and agreed to work closely, bilaterally and globally, to tackle this menace, according to a report.

During the meeting, PM Modi "highlighted the need for greater market access for Indian commodities including, pharmaceutical, automotive and agricultural products."

"While noting that Indian companies have made a substantial investment in Indonesia, PM Modi invited Indonesian companies to use the opportunities presented in India for investment," the statement informed.

India attaches high priority to its bilateral relationship with Indonesia, with which it shares a Comprehensive Strategic Partnership. This year, India and Indonesia are also commemorating the 70th anniversary of the establishment of diplomatic relations.