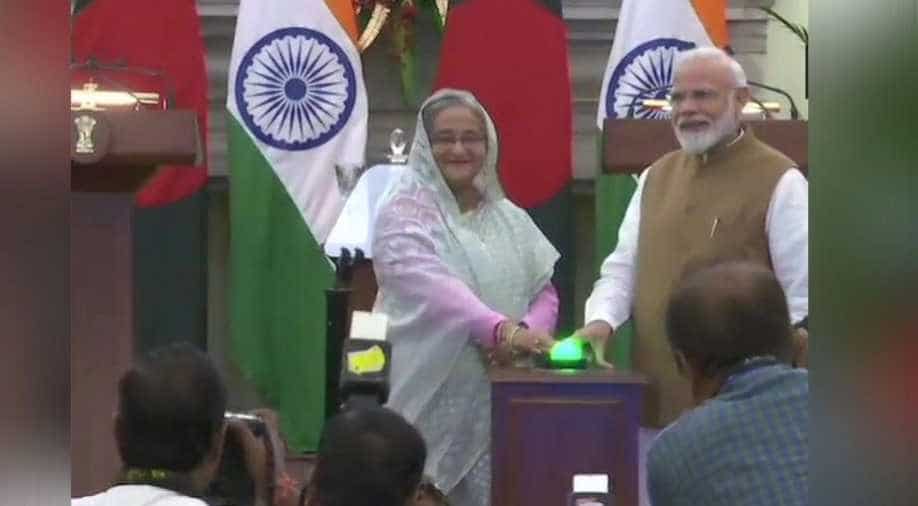 India and Bangladesh signed as many as seven Memorandum of Understanding (MoUs) under which India will provide coastal surveillance to Bangladesh.

New Delhi will withdraw water from River Feni for drinking.

Prime Minister Narendra Modi: I am glad that I got an opportunity to inaugurate 3 more bilateral projects between India & Bangladesh today. In one year, we have inaugurated total 12 joint projects. pic.twitter.com/0liiNj3keh

"Within a year, India and Bangladesh have undertaken a dozen projects. We launched nine projects via video link, it is an achievement and a new milestone in our bilateral ties," PM Modi said.

The prime minister said that the three bilateral projects which were inaugurated today are extremely crucial for the India-Bangladesh ties.

"The projects are on LPG import from Bangladesh, vocational training and social facility. The motive of our projects are always to benefit our citizens and improve the quality of their life," Modi stated.

The prime minister added that the projects create a "win-win" situation for both the nations as they will lead to boosting financial situation, employment and income generation.

Bangladesh Prime Minister Sheikh Hasina hoped that the projects will make bilateral trade relations between India and Bangladesh more dynamic. She added that LPG bulk import from Bangladesh to India will meet the demand for fuel energy in India's northeast region.

External Affairs Ministry Spokesperson Raveesh Kumar, in a weekly press conference, said that the talks will revolve around trade and connectivity, development cooperation, people to people contact, culture and other issues of mutual interest.

The Bangladeshi Prime Minister is on a four-day visit to India.