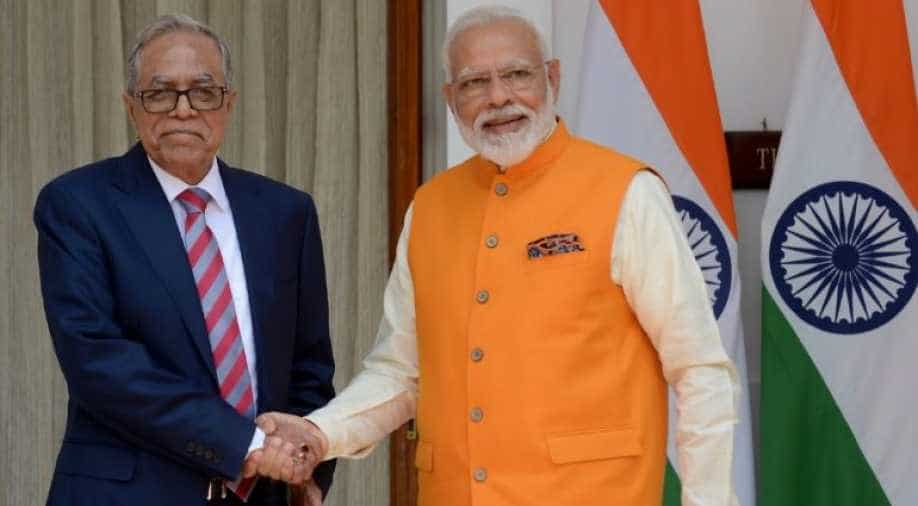 In the meeting between Modi and Sirisena, both leaders noted that terrorism and extremism continue to pose threat to humanity and expressed commitment for closer bilateral cooperation for peace and security in South Asia and the Indian Ocean region, the external affairs ministry said.

Sri Lanka was hit by a wave of bombings last month in which over 250 people were killed.

"Modi warmly thanked President Sirisena for his gesture of attending the ceremony and also for his good wishes. He conveyed his government's continued commitment to further foster friendly bilateral ties with Sri Lanka," the MEA said.

On the meeting between Modi and Jugnauth, it said both leaders agreed to work together to achieve the shared vision of security and growth of the two countries and the Indian Ocean region.

"Prime Minister Modi thanked Prime Minister Jugnauth and reiterated his commitment to further strengthening the fraternal and enduring bilateral ties between the two countries in all spheres," said the MEA.

Modi also held talks with his Nepal counterpart K P Sharma Oli during which both leaders expressed their commitment in further deepening relations.

The prime minister also held a bilateral meeting with Bangladesh President Abdul Hamid during which they exchanged views on matters of mutual interest.

In his first engagement after being sworn in, the prime minister held a meeting with Kyrgyz President Sooronbay Jeenbekov, who attended the oath taking ceremony as the Chair of the Shanghai Cooperation Organisation.

"Recalling that India and Kyrgyzstan have warm and friendly relations, the Prime Minister expressed satisfaction at the strengthening of bilateral cooperation over the years," the MEA said.

India invited leaders of the Bay of Bengal Initiative for Multi-Sectoral Technical and Economic Cooperation (BIMSTEC) countries as well as Jeenbekov and Jugnauth for Modi's swearing-in ceremony.

In 2014, Modi had invited all SAARC leaders, including the then Pakistan Prime Minister Nawaz Sharif for his swearing-in ceremony, in a major initiative to reach out to the neighbourhood.

However, this time, the BIMSTEC leaders were invited, which was seen as an attempt to avoid inviting Pakistan for the event.

Founded in 1997, BIMSTEC currently represents over 1.5 billion people and having a combined gross domestic product of $3.5 trillion.