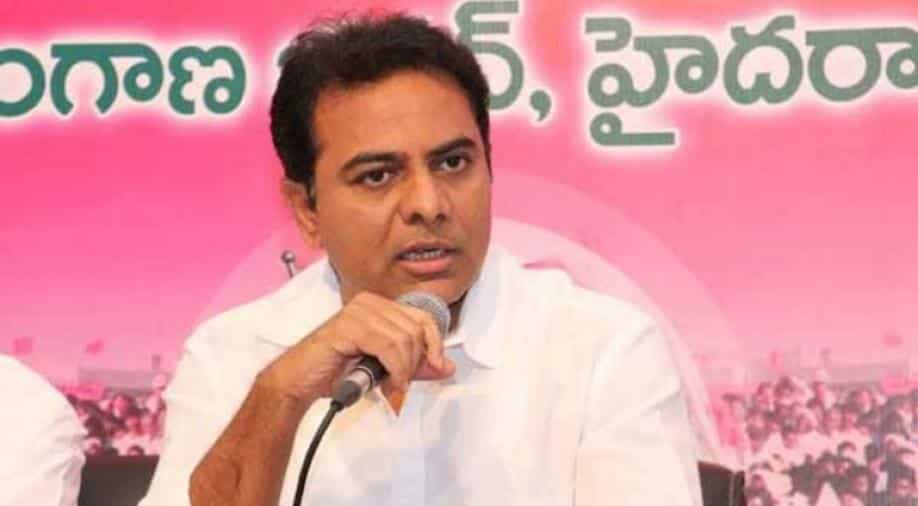 KTR said the party has laid a strong foundation in the state, but admitted there were some issues in implementing all its promises.

As the Telangana Rashtra Samithi (TRS) makes a determined bid to retain power in Telangana, party leader K T Rama Rao expressed confidence people will cast "decisive votes" in its favour in the upcoming assembly polls, asserting that his father and interim chief minister K Chandrashekar Rao is enough to neutralise any anti-incumbency sentiment against the party.

Claiming that people in the country's newest state that took birth in 2014 are aware of the TRS government's developmental work, Rao said the party is banking on his father and his vision to come to power again, hoping to get 100 seats in the 119-member house.

Popularly known as KTR, the 42-year-old is contesting for the third time from Sircilla constituency, 140 km from Hyderabad, in the December 7 assembly polls. He won with over 53,000 votes against a Congress candidate in the 2014 assembly elections.

In an exclusive interview to PTI, Rao said, "People realise that this is the election where KCR (as the chief minister is popularly known as) gets elected as chief minister. For that to happen, they have to vote for MLAs. Whatever anti-incumbency or dissatisfaction that could be against incumbent MLAs, that will be eclipsed by KCR."

He said the Opposition has been pointing out "blemishes" in the TRS (Telangana Rashtra Samiti) manifesto, but the people have to decide finally.

Exuding confidence that people will cast "decisive votes", Rao who is one of the most popular faces in the state and a potential successor of K Chandrashekar Rao, said let people judge TRS' performance and cast their vote.

He said the party has laid a strong foundation in the state, but admitted there were some issues in implementing all its promises.

"There are going to be issues. But we already have a foot in the elections and we are going on polls on December 7. Let them (Opposition) give their agenda and we will give ours. Let people decide. We believe we played a strong foundation," he said.

The state debt-to-GDP ratio is 22 per cent that is lower than the country's average and than that of many other states, he added.

Rao also rejected suggestions that there is a power tussle within the family and said his father will be the chief minister for the next 10-15 years.

He further said the 'Rythu Bandhu Scheme' was a revolutionary scheme lauded by the UN as well as renowned farm scientist M S Swaminathan and chief economic advisor Arvind Subramanian but the Opposition was finding "loopholes".

"I pity their intellectual bankruptcy. ...These jokers (Congress and TDP) who ruled us for 70 years could not conceive a programme like this," he said.

The TRS leader further said the party has turned a power-deficit state into a power-surplus state, irrigation projects are near 90 per cent completion and the state government has brought 38 lakh hectares under irrigation.

Stating that farmers' suicides are declining rapidly in the state, Rao said, "Union Minister of State for Agriculture Purshottam Rupala has said it on record on the floor of Parliament that 1,500 or 1,600, subject to correction, farmers suicides have come down by 54 per cent last year to 645. We also want to see a situation in Telangana that there are zero farmers' suicides."

Asked about the Opposition's allegation that the TRS was becoming a party of Reddy community as half of the candidates fielded by it belong to that caste, Rao said these are baseless allegations.

"We do not divide communities in Telangana based on caste, creed or religion," he added.