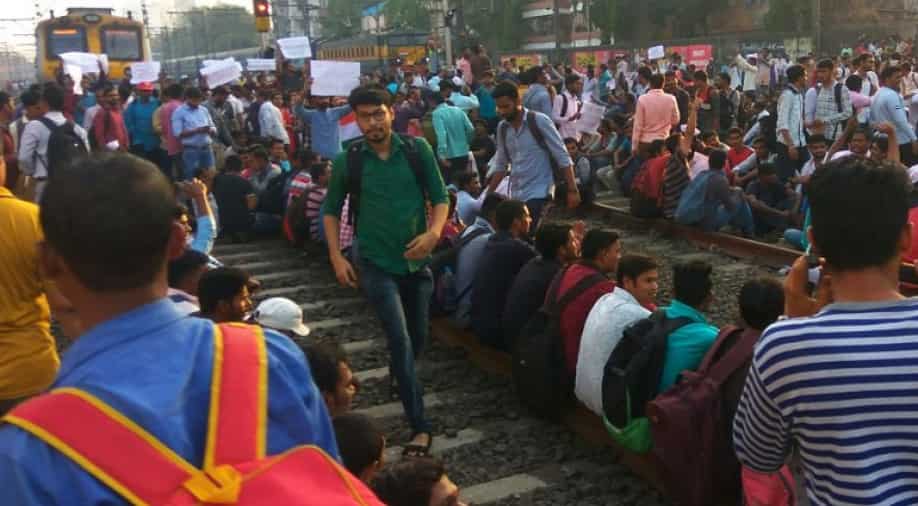 Protesting against the confusion surrounding railway recruitment, students stopped trains on Central Railway during the peak hours on Tuesday.

More than 500 students working as apprentices in different technical workshops of Railways staged a rail roko on the Central Railway (CR) Line, demanding permanent jobs. Due to this, trains between Kurla and Dadar stations remain suspended.

According to senior railways officials of the Central Railways, the students have stopped traffic since 7 am. Officials said they are running special trains for Kurla station in the down direction and diverting railway traffic from Dadar station in the up direction to facilitate commute.

Entire four lines are affected between Matunga and CSMT. Police and railway official are having talks with them, the official said.

As per latest information, at least 60 trains are said to be either running late or cancelled due to the agitation. Trains are, meanwhile, running between Kurla from Karjat/Kkasara and the passengers are allowed to travel on Harbour line.

"There has been no recruitment since last four years. We are struggling from pillars to post. Over 10 students have committed suicide. We cannot let such things happen," a student who was part of the protest said.

"We will not budge from here until and unless Railway Minister Piyush Goyal come and meet us. Our several prayers made to DRM (Divisional Railway Manager of Mumbai Division) have failed," another student said.

"Mumbai police along with GRP and RPF jawans are having talks with the students and railway's first priority was to clear the track first," Chief PRO of Central Railway Sunil Udasi said.

Students shouting slogans against railways held the placard in their hands demanding one-time settlement from GM quota and said that they demand jobs from government.