Opinion: What Rahul Gandhi can learn from 'Rocket Singh' about elections? 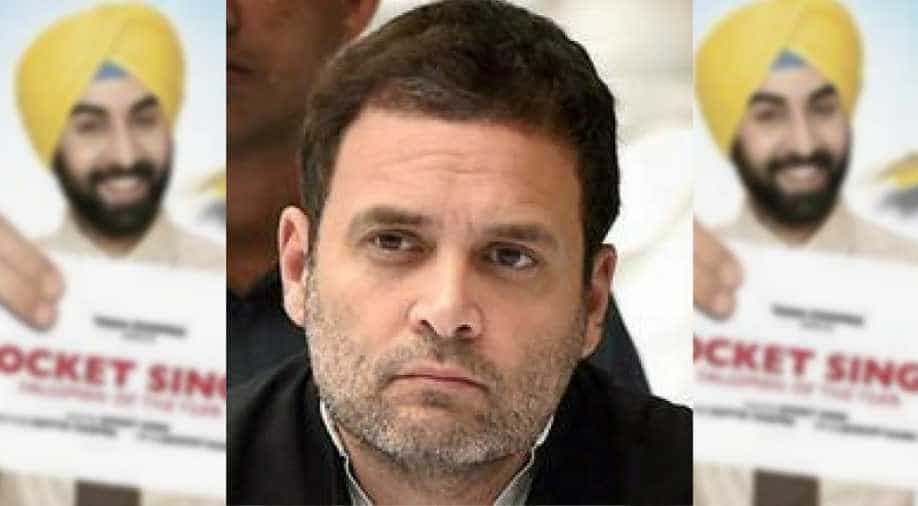 Congress was founded by A.O. Hume on 28th December 1985, so it has completed 132 years few days after the coronation of Rahul. Congress celebrated the day at their office at Akbar Road. As such it is a sort of farce that present day’s Congress claims the legacy of the party which was founded in 1885; neither the people are same nor the ideology. Moreover, Indira Gandhi brought tectonic changes in the core ideology of the party for all times to come during the late seventies.

Now, come to the events during the first three days of March 2018. First, the Gandhi scion flew to Italy, supposedly to surprise his Nani (Grand Mother) on the Holi weekend. It was anybody’s guess that he was out on a vacation under the garb of meeting his Nani.

While Rahul was vacationing, the poll results were out for three north-eastern states. The left had a serious drubbing in Tripura as they lost out its old bastion of Tripura to BJP but there was a serious setback to Congress overall. End of the day it’s not CPI/CPM but it is Congress who is relevant in the discussions as Congress is the alternative at the national level and not Left Parties. Congress lost heavily in all three states. The major sign of worry for Congress is that they simply allowed BJP to take full advantage of anti-incumbency in Tripura.

It was another reality check for an old grand party, who has been gloating as such after success in Rajasthan by-polls.

The Ostrich Syndrome is pervasive in Congress and with little success, Rahul and his coterie of sycophants start telling themselves “hey, we are recovering” and then realty would bite them hard and they fall prey to the real challenge. It has been happening for years.

Two months back Rahul and company were telling the whole world that they almost defeated Modi in Gujarat. However, on the bit of analysis, it becomes clear that even in Gujarat, it has been a significant victory for Modi and BJP. Consider all these factors: 22 years of incumbency, disgruntled business class due to demonetization and GST glitches, alienated Patidars, a strong bid by Congress to consolidate anti-BJP factions, no Modi in Gujarat. But still, BJP managed to float with the reasonable level of comfort.

Vote share difference between Congress and BJP in 2012 was 9%, whereas in 2017 it is 7.7%. So even with above-mentioned reasons and Congress’s brazen attempt to polarise on the caste basis, only 1.3% of the gap could be bridged. True that Congress made some positive dent in BJP’s vote bank but as a political analyst puts it clearly that the dent made by BJP in Congress vote bank in Gujarat-2017 is far more sustainable than what Congress made to BJP’s vote bank.

So now with the huge and seminal setback in North-East, what is the way forward to Gandhi scion? Actually more than electoral drubbing, the worrisome fact is that there has been no improvement in the functioning of the party.

I veer my narrative to different direction now. There is a narrative, which we tell in management classes to our salespeople. A few years back a Hindi movie with the title “Rocket Singh – Salesman of the year” was released. It was directed by Shimit Amin, the man who directed the iconic “Chak De India” with Shahrukh. Rocket Singh was a simple guy who acts on his instinct, against general stereotypes of a salesman and makes an outstanding connect with his customers.

The core message of the movie was outstanding and touched the chord. It said “If you want to be a successful sales guy then don’t chase the sales figures. You rather be passionate and make connections with your customer, understand their pain points, be emphatic and transparent and give them a fair deal. If you are able to do so then you don’t have to chase sales figures but sales figure would chase you”.

The crux of the message was that one needs to put basics in place and everything else will fall in line. In other words, focus on curing the core infection and don’t waste your bandwidth in managing symptoms. If the infection is cured, symptoms would fizzle.

This is quite spot on and applicable in all fields.  Achieving success is no petty game; and as Rocket Singh preached, you just need to correct the basics.

Politics is salesmanship only. Politician chases vote counts the way a salesman chases sales figure. This remains the root cause of failure and prevents the revival.

Rahul Gandhi and Congress are suffering from this core problem. Year after year, election after election, Rahul Gandhi is repeating the same mistake; not putting the basics correct across the old grand party and blindly chasing the vote count as last-minute attempt under desperation and on behest of his sycophant advisors.

What are those basics?

Here is the list: first, a strong and compelling narrative to tell the voters; the presence of motivated and strong cadre right up to bottom level. Congress can take a cue from BJP as to how its cadre pulled things in Tripura. Second, the presence of established, strong and vote puller local leaders. Third, relentless efforts to maintain a connection with people – and lastly, a clear and convincing blueprint of governance if voted to power.

Politics is a funny game and plain arithmetic often fails here. For Rahul, Uttar Pradesh was the glaring example, before he drew his Gujarat plans. His mindless alliance with Samajwadi Party fell flat. Moreover, it demoralised and marginalised whatever little cadre Congress had in UP.

The only way Rahul Gandhi can resurrect the organisation is to by simply putting basics correct without any fear of electoral drubbing. In the process of course correction, if he loses few more election, it won’t make a difference. He need not blindly chase vote counts. Like Rocket Singh proved in the movie, if Rahul Gandhi can put the basics of electoral politics right, then vote count will chase him.

Time is running thick and fast. General Election is just 14 months away and if Congress does not recover in 2019, the process of decline will become irreversible.

And yes, politics is 24x7 occupation, Rahul. Your party comes first before anything else so stop flying abroad every now and then. It is so demoralising for the cadre that news of drubbing is coming in and leader is vacationing abroad.