Only India has manufacturing capacity to supply COVID-19 vaccine to the world: Australian envoy to India 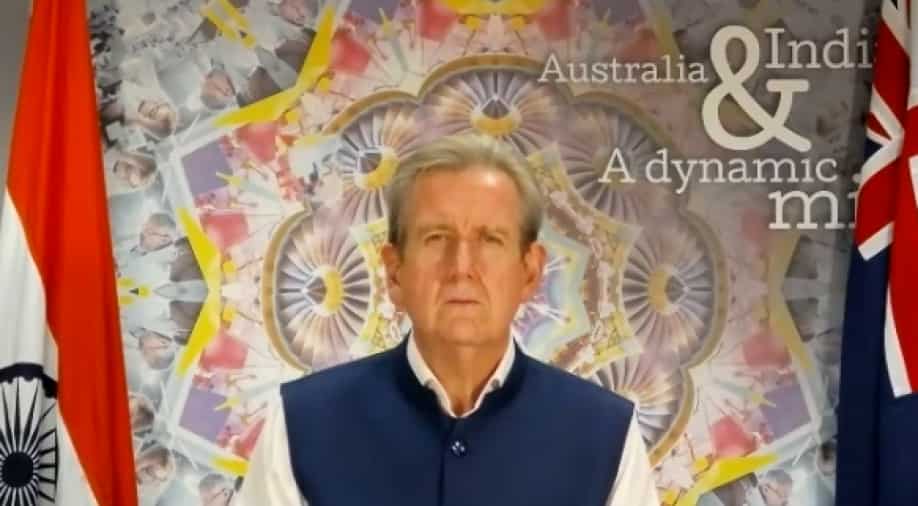 Australia's High Commissioner to India Barry O'Farrell has said the Indian government has informed him that the Australian anti-Covid assistance has reached "areas of need" in states like Odisha, West Bengal, Jharkhand, Assam and Bihar

Australia's High Commissioner to India Barry O'Farrell has said that the Indian government had informed him that the Australian anti-Covid assistance has reached "areas of need" in states like Odisha, West Bengal, Jharkhand, Assam and Bihar.

Earlier this month, Australia had sent assistance of 1,056 ventilators and 43 oxygen concentrators to India as it battles the devastating second wave of the Covid pandemic.

Speaking to our Principal Diplomatic Correspondent Sidhant Sibal, High Commissioner Barry lauded India's vaccine production capacity, saying,  "There are many vaccine manufacturers around the world, only one country has the manufacturing capacity to supply the world, that is India."

He also spoke on Indo-Pacific, Chinese aggressiveness, and the recently concluded first- ever India- Australia-France foreign ministers trilateral in the UK.

Sidhant Sibal: What kind of assistance is Australia sending to India?

Barry O'Farrell: I am proud that Australia is standing with other countries, alongside India as it battles the second wave. Last week I was delighted to see the first essential supply of medical equipment arrive in New Delhi from Australia. The first charted flight of Qantas brought more than 1000 ventilators in addition to oxygen concentrators. It was great to see them immediately handed over to the Indian red cross for distribution and start of this week I was advised by the Indian government that the Equipment was delivered to areas of need in Odisha, West Bengal, Jharkhand, Assam, and Bihar. I want to congratulate all those involved, with the obvious need with which it came off the plane through customs and arrived in those states to help the covid patients. We look forward to more of this because a 2nd flight carrying additional essential medical supplies will arrive in Delhi later this week.

Sidhant Sibal: Amid the Covid pandemic, what kind of cooperation are both sides undertaking?

Barry O'Farrell: Australia and India at the start of the covid crisis last year have been in close collaboration with foreign secretaries in the early days of last year were speaking each week amongst themselves and other countries across the region about the challenges of the COVID and how each was learning to deal with it. So we were sharing information from the start obviously and we saw over the year, the Quad continues to develop, and at the quad meeting month or 2 ago, the leaders decided to address a number of issues, including COVID and the initiative related to vaccine roll out across the Indo Pacific region. Australia is assisting in the last-mile delivery of these vaccines. Last week again our foreign ministers spoke on the sidelines of the G7 foreign ministers meeting again about what more Australia can do. We will continue to do and be in close cooperation. Vaccination is important and over the last time, I checked the statistics, both of our countries have vaccinated something like 10 per cent of our adult population. There is a lot more to do, the issues around vaccine role out, the issue around supply, issues happening around the world and we are keen to do whatever we can. We look forward to, as we understand, the vaccine manufacturing, production level increasing by the end of July. There are many vaccine manufacturers around the world, only one country has the manufacturing capacity to supply the world that is India. That is why we respect India, and that is why this time, so many countries are providing assistance as India battles this vicious 2nd wave.

Sidhant Sibal: Australia had suspended flights from India amid the second wave of the pandemic. Now flights are going to resume from the 15th. What will be the key focus and when will we see normal flight operations?

Barry O'Farrell: More than 700,000 people of Indian origin, across Australia. A huge number of Indian Australian families in Australia who in a regular year would frequently travel across the Indian ocean between both countries. We paused flights between the 2 to reduce the level of infections. People who have travelled to Australia know they required 2 weeks of quarantine and they don't come out of quarantine until they test negative for covid. It is one of the key efforts by Australia to reduce the level of COVID, across Australia and we have been successful in doing that. The good news is that after the first 10 days of that pause, the desired impact had occurred. The PM announced that there would a return of the government facilitated flights from India to Australia which will resume next Saturday. The goal is to return 1000 of the registered vulnerable Australians to Australia over the next 6 weeks. Since the start of 2020, more than 20,000 Australians registered for repatriation have returned from India to Australia. There are around 10,000 more wishing to do so and we are keen to have a resumption of flights as safety regulations rules in Australia permit.

Sidhant Sibal: Your PM praised you for reaching out to Australians stuck in India. How many Australians are in India and what is expected in terms of repatriation?

Barry O'Farrell: It was difficult in the start because there was no single list of Australians in India. So the initial effort was simply to encourage Australian citizens, residents in India to register at the department of foreign affairs, and in that way, we were able to identify those who might the vulnerable. Vulnerable because, they had financial issues, vulnerable because there living conditions, medical conditions. That has been the biggest challenge. As I would say, more than 20,000 Australians registered with the foreign ministry and returned home. There are about 10,000 on the list and there would be thousands of others across India. The key is to identify the vulnerable, we have identified at least a thousand, priority is to return them by end of June, and then we will return to the situation that was before the 2nd wave was either through the middle east or Asia, directly via Air India or other direct flights, we saw the movement of people between Australia and India. One of the success stories for Australia was we dealt with covid, has been like India, we closed borders, like India we put flight bans. We have restrictions on people leaving and coming to Australia, that is part of our armoury of weapons in battling covid. It is likely to remain for some time, it doesn't mean we won't see the return of regular flights in the coming months. Yesterday Australian Budget was delivered and it predicted normalcy in these things in the first half of next year, so these are difficult times for all of us, not just India which is having outbreaks. India is suffering in the 2nd wave but we seeing around the world no sooner we think we have defeated this disease it comes up again and I think every country is on stand by, every country is on alert and every country is doing what they can for citizens, for health systems to protect communities.

Sidhant Sibal: India-Australia-France foreign ministers trilateral happened in the UK. What is the key focus of the meet?

Barry O'Farrell: The fact that it has moved from the secretary level to the ministerial level in such a short time demonstrates the close commitment and the shared interest between India, France, and Australia, That includes their mutual interest particularly across the Indian ocean where we all have a presence and where we all seek to effect a positive vision for the region which is open, inclusive, and a resilient Indo Pacific. Last week, the foreign ministers of each of those countries met on the sidelines of the G7 and identified a range of areas across the Indo Pacific where they could work together which include maritime safety and security, maritime environmental issues, multilateral system, and reform and health and economic recovery from the pandemic. Trilateral stands out for its momentum and its focus on practical solutions, better still, it gives us some deadlines. Senior officials working group will meet again in the latter half of this year and so that we progress on those matters which ministers identified for practical work last week in the UK.

Barry O'Farrell: We both share the Indo Pacific as our neighbourhood, it is also quickly becoming the world's most consequential region because of the shift of power from the north Atlantic to the Indo Pacific, because of the Economic Heft that exists across the region, because of the countries which make up the region. It is also the epicentre of strategic competition in the world facing growing challenges, including escalating tensions over territorial claims, frequent and sophisticated cyberattacks and disinformation, interference that is being used to manipulate societies. As my foreign minister logically said last year, it is a trouble that some countries are using a pandemic to undermind liberal democracies and promote their own more authoritarian models. That is one of the reasons why India, and Australia have become closer because they share a vision, for a positive agenda for the Indo-Pacific, which is all about being stable, open, and prosperous. An Indo Pacific, based on strong institutions, norms, and respect for the law, and free from the threats of military and economic coercion. So we will continue to collaborate and coordinate with India and a variety of others but particularly with India, the US, and Japan through the Quad to deliver on this agenda that the Quad shares for the Indo Pacific and that is the best way in which we can work with countries across the Indo Pacific, through ASEAN to ensure we all sign up to a vision that seeks to acknowledge that there are international rules and rules that should govern the way in how disputes are settled and ultimately ensure that order is again restored.