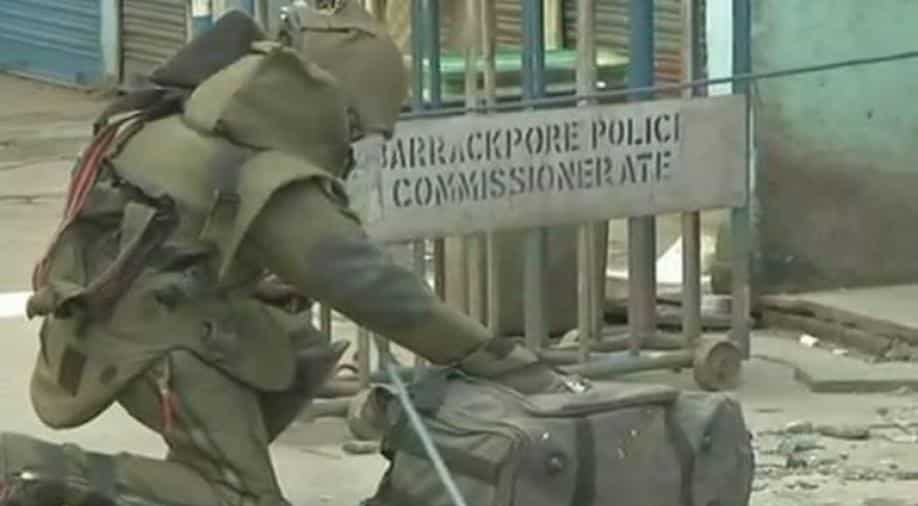 A forensic team and sniffer dogs have been sent to the spot to ascertain the nature of explosion. Photograph:( ANI )

The explosion was reported outside a fruit shop on the ground floor of the building in the congested Kazipara area.

A seven-year-old boy was killed and nine people, including his mother, were injured in a low-intensity explosion in front of a multi-storey building in the Nagerbazar area in Kolkata's northern suburbs on Tuesday, police said.

"A child, who was severely injured in the blast, has died in hospital. A total of nine people are injured," Deputy Commissioner of Police, Barrackpore Commissionerate, Ananda Roy said.

As per initial investigation, ammonium nitrate was used in carrying out the low-intensity blast outside the building, which also houses the office of South Dum Dum Municipality chairman Panchu Roy.

"It was a socket bomb explosion. Forensic team and the bomb squad of CID are examining the spot. We have started further investigation," a police officer said.

The explosion was reported outside a fruit shop on the ground floor of the building in the congested Kazipara area under the jurisdiction of Dum Dum Police Station around 9 am, the officer said.

"Initially, we thought it was a gas cylinder blast. But it is not so. We have found a few iron nails but there is no smell of gunpowder," another senior police officer said.

Trinamool Congress leader Roy claimed that he was the target of the blast.

Roy, stopping short of naming any political party, said the forces, which are currently attacking the ruling TMC all over Bengal, are behind the attack.

"It was a pre-planned blast... They had planned to kill me and other TMC workers, as it would create panic and help them gain foothold in the area," he told PTI.

Asked whether the explosion was a result of infighting within the TMC, Roy said there was no such issue in south Bengal.