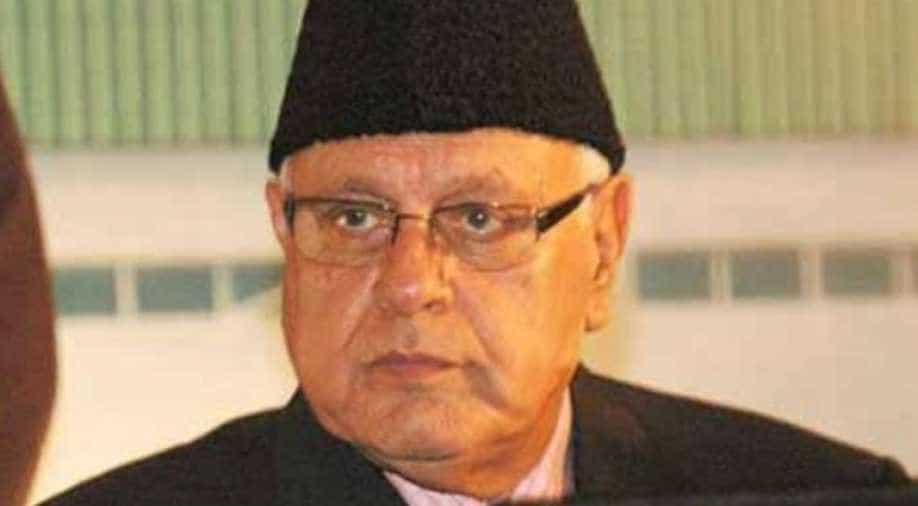 A 15 member delegation of the National Conference on Sunday met with their party president Farooq Abdullah at his residence in Srinagar where he is currently under house arrest since abrogation of Article 370.

The delegation will meet his son, Omar Abdullah, separately, later in the day.

The meeting comes a day after the party was permitted by Jammu and Kashmir Governor Satya Pal Malik to meet the father-son duo.

Farooq, clad in a grey suit and signature headgear, looked hale and hearty. He flashed a victory sign as he stood with the visiting party leaders and wife Molly Abdullah for a photograph.

Speaking to ANI before entering the residence of the chief, party lawmaker Akbar Lone cleared the party`s stand on the abrogation of the region`s special status. "We have been cheated. We are trying to bring Article 370 back."

Another lawmaker, Hasnain Masoodi, who met Abdullah, echoed similar sentiments and sought "everything to be rolled back to what it was prior to August 5".

"We expect the central government to take cognizance of the constitutional issue. The constitution has been disregarded and assaulted," he said.

Masoodi said that everything is "meaningless" as Article 370, 35A and special status are the "primary importance" for the party.

"The bottom line is that whatever was done was unilateral and done without consulting the stakeholders," he added.

After the Central government decided to revoke the special constitutional status accorded to Jammu and Kashmir (J&K) under Article 370, two months ago, the region was placed under a communications blockade and several mainstream political leaders, including the father-son duo and Peoples Democratic Party (PDP) chief Mehbooba Mufti were put under house arrest.