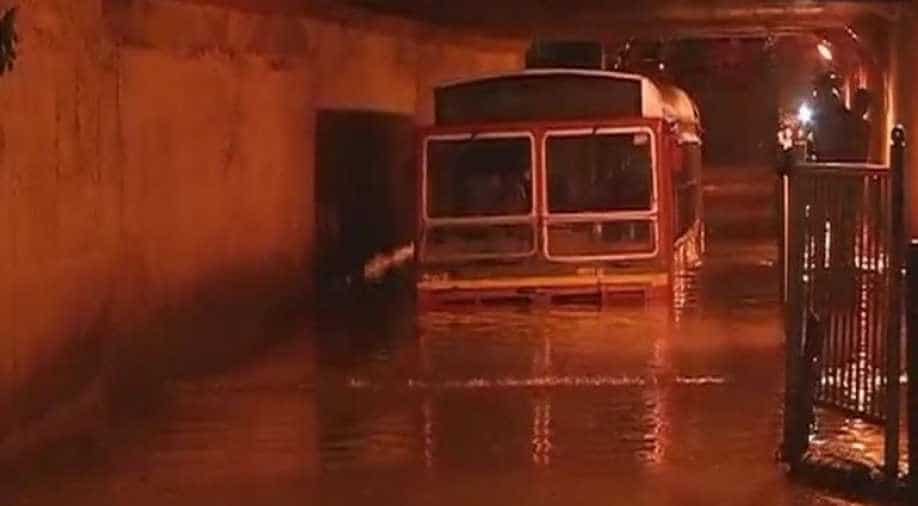 The main runway of the city's airport continues to remain closed. Photograph:( ANI )

The Met Department has said the "situation (in Mumbai) will improve from now onwards."

The department said they had removed the heavy rainfall warning, but that the city and its suburbs were likely to get intermittent rainfall for the next 48 hours.

No cyclonic warning has been issued, a top official of the Mumbai civic body, the Brihanmumbai Municipal Corporation clarified.

More than 50 flights have been cancelled as the main runway of the Mumbai airport continues to remain closed.

An airport spokesman said there would continue to be delays in flight arrivals and departures because of the fluctuating weather.

#MumbaiRains: Visuals from Gateway of India; high tide is expected to hit around 12 noon today. pic.twitter.com/ZEkgRTAKGU

Earlier, ANI reported, a total of 56 flights had been diverted.

Airport authorities are still trying to pull out the stuck aircraft. It had overshot the runway after landing and had got stuck in the mud.

Massive waterlogging has been reported from around the city.

The Mumbai Police tweeted that high tide today was expected at 12.03 pm.

Mumbai Police had last night tweeted that the city's schools would remain shut today as a safety precaution, irrespective of weather conditions.

Just now,the State Gov has declared a holiday in schools tomorrow for safety of students, irrespective of weather conditions #mumbairains

A spokesman for the city's famous dabbawallahs said they would not be working today.

The met department said Mumbai city had got 210 mm rainfall, the suburbs had got 303 mm, and Dahanu near Mumbai had got 304 mm rainfall.