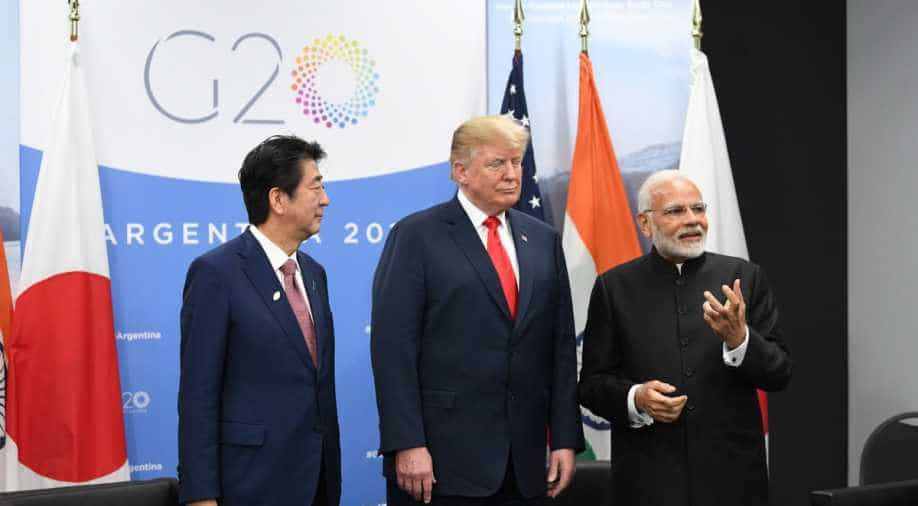 Indian PM said that both Japan and the US are India's strategic partners and leaders of both the countries are his friends.

Indian Prime Minister Narendra Modi, who is well-known for coining acronyms, rattled off another one at the scheduled trilateral meeting between India, US and Japan.

Indian PM said that both Japan and the US are India's strategic partners and leaders of both the countries are his friends.

''It is an enormous opportunity that countries who are totally dedicated towards the value of democracy are on the same platform with the intention to work together for the peace, prosperity and stability,'' Modi said While addressing the media along with the two leaders.

US President Donald Trump sounded optimistic about his interaction with Modi and Abe.

Taking a cue from Modi's acronym, Japanese Premier Abe said he was happy to participate in "the first ever 'JAI' trilateral" meeting.

All three leader agreed to have free trade ingress in the Indio-Pacific region besides agreeing free, open, inclusive, rule-based order is essential for the region's peace and prosperity.

President Trump and PM Abe also complimented Modi for his reform and development-driven agenda in India.

The PM Modi offered some that how we should take forward the concept of Indo-Pacific and how three countries can work together to promote this concept and focused on the Necessary for all three countries to reach out the all stakeholders to explain the benefits of the Indo-pacific strategy and their advantages to these countries.