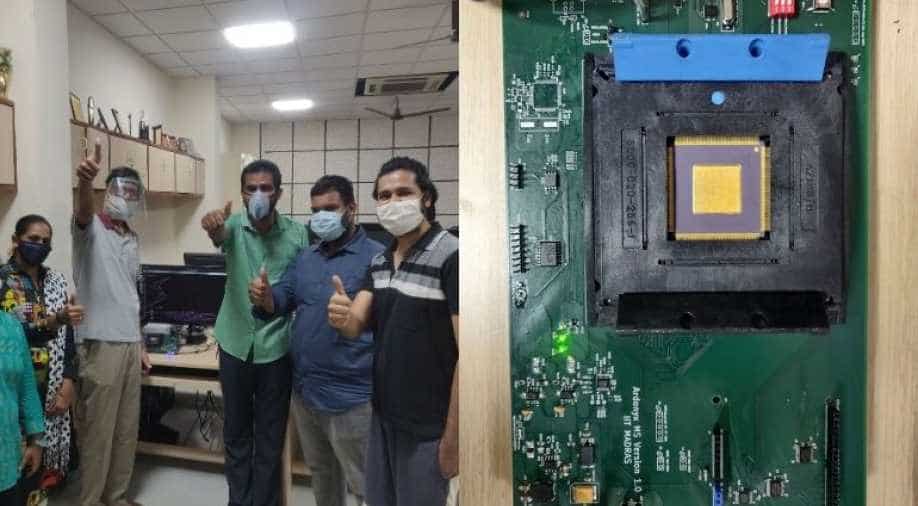 It is notable that Moushik’s predecessor - Risecreek (22nm chip designed in India and fabricated by Intel) is already in use in India’s strategic sector. Photograph:( WION )

IIT says that the Shakti series Microprocessors can be used by others as it is on par with International Standards and can pave way for a global market.

“This is a 180nm chip with a 100Mhz speed and can cater to various small devices and home appliances. In terms of cost, if there is an order for one million units, cost can be brought down to even 1USD per chip. Even though it is of less processing power, India needs billions of such chips for various purposes” he told WION.

The processor development is a joint effort between Indian academia and scientific facilities. While the Design of the Microprocessor, Motherboard PCB, its Assembly and Post-Silicon Boot-up were done at IIT Madras, the foundry-specific backend design and fabrication was undertaken at Semi-Conductor Laboratory of Indian Space Research Organization (ISRO) in Chandigarh. The manufacturing of this motherboard was done at Bengaluru. Shakthi Moushik SoC will constitute the heart of an indigenously-developed motherboard called ‘Ardonyx 1.0.’

It is notable that Moushik’s predecessor - Risecreek (22nm chip designed in India and fabricated by Intel) is already in use in India’s strategic sector. Risecreek, an industry-level chip caters to the 100-350Mhz speed segment. Rimo, another variant in this series was also based on the 180nm technology and was designed and developed in India. “Now we have three processors ready and another class of processors is in the works. To serve higher computing speeds we can use the existing chips, combine them like building blocks and scale up” Prof Kamakoti added.

Currently, India's fabrication facilities can only offer upto 180nm technology chips. Sophistication and efficiency of chips increase with the decease in nm. For context, some of the chips powering contemporary smartphones and laptops are between the 5nm and 22nm range. it is expected that Indian facilities will scale up their technology in the coming years.

IIT says that the Shakti series Microprocessors can be used by others as it is on par with International Standards and can pave way for a global market. Given their open-source nature, startups and industries can customize its design based on their needs. Indigenous design, development and fabricating also reduces the risk of using (Imported) systems that may be infected with back-doors and hardware Trojans. This development will assume huge significance when systems based on SHAKTI processors are adopted by strategic sectors such as defence, nuclear power installations and Government Agencies and Departments.

The government of India has also launched the Swadeshi Microprocessor challenge, where the start-ups in this domain can provide solutions to complex designs around home-grown processor ecosystem, catering to both global and domestic requirements.