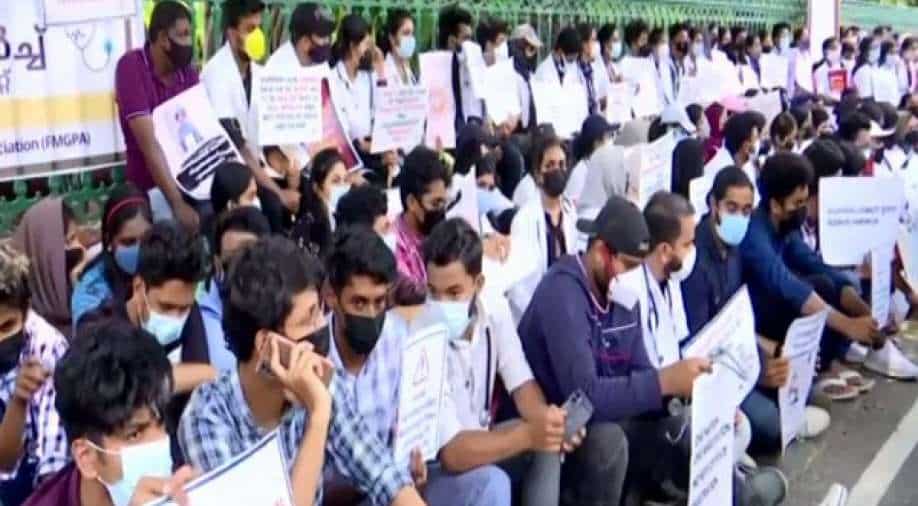 Anxious over uncertainty on their return, students at the protest held placards highlighting their plight. One of the placards drew a comparison of these medical students with those who returned from Ukraine, following Russian military operations, demanding urgent government intervention in their problems as well.

Several Indian students pursuing MBBS in Chinese universities staged a protest outside the Kerala secretariat on Saturday seeking recognition of their physical training in India.

The protest was held under the banner of Foreign Medical Graduates Parents Association (FMGPA) - an association of parents of medical students in foreign countries.

Forced to return to India after the COVID-19 pandemic broke out, the medical students have since been unable to return to their host country and have continued their physical training at government and private hospitals in the state.

Stuck in their home country due to the non-availability of visas from the Chinese authorities, the Indian students have resorted to completing their courses with the help of online classes.

"We were forced to come back from China in January 2020. It`s been two years since we have been attending online classes. We don`t have any recognition of whether the Indian government will accept us with these online classes. Most of us are doing are practicals at various government and private hospitals in Kerala, but is not recognised," Murshid Aleen, a fourth-year medical student at Yangzhou University told ANI.

Worried about repaying their loans and completing their education, the student said they have communicated their problems to the central government through an online portal-Centralised Public Grievance Redress and Monitoring System (CPGRAMS).

"We are helpless right now. We need a certificate from the government that we are going to the hospitals for a certain period and we are getting observation with certain department," Aleen said.

He further highlighted that China is presently facing another wave of COVID-19 and said that the situation there is becoming "more critical."Vice president of FMGPA, Subair MC said that students want authorisation from the Kerala government and Indian government to get their certificates to deem their education as "valid."

Anxious over uncertainty on their return, students at the protest held placards highlighting their plight. One of the placards drew a comparison of these medical students with those who returned from Ukraine, following Russian military operations, demanding urgent government intervention in their problems as well.

"Students from China are facing the same difficulties as students from Ukraine. Please don`t forget us," it read.Last month, the Delhi High Court issued notice to the Centre and National Medical Council (NMC) on a plea moved by students seeking directions to NMC to allow physical training in India of Indian students studying medicine in China, who are stuck in their home country due to COVID-19 pandemic. The Petitioners, 147 students of medicine in the Ningbo University (China) states that they returned to India in early 2020 (January to March) and thereafter, have been stuck in their home country India, ever since due to the non-availability of visas from the Chinese authorities.

The Division Bench of Justice DN Patel and Justice Jyoti Singh had sought response of Central Government through the Ministry of Law and Justice, Ministry of External Affairs, Ministry of Health and Family Welfare and National Medical Council and listed the matter for March 21, 2022.