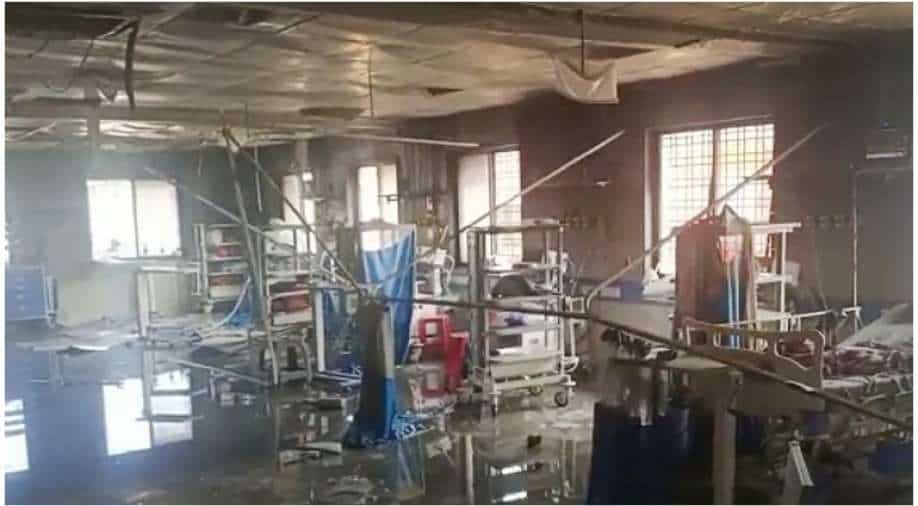 Ahmednagar: Charred remains at the ICU of Civil Hospital after a fire broke out, in Ahmednagar, Saturday, Nov. 6, 2021 Photograph:( PTI )

The fire in the ICU of a hospital in Maharashtra's Ahmednagar district is one more in a series of devastating blazes in the state, claiming lives of coronavirus patients.

Eleven Covid patients being treated in the ICU died in the blaze in the district hospital at Ahmednagar on Saturday. On April 23 this year, when the second wave of the pandemic was at its peak, 13 Covid patients died as fire engulfed the ICU of the Vijay Vallabh Hospital in Virar, around 60 km from Mumbai.

There were 90 patients in the hospital, 18 of them in the ICU, when the fire broke out after a blast in the AC unit. The dead included six women and eight men.

Ten coronavirus patients died in a fire at a hospital in the eastern suburb of Bhandup in Mumbai on March 26. The fire broke out in Dreams Mall, which housed a Covid-designated hospital. It raged for over 40 hours. The dead included those on ventilator support.

As many as 24 Covid patients on life support died at the civic hospital in Nashik on April 21 after a leak in the medical oxygen tank. The leakage from an oxygen tank caused disruption in oxygen supply for around 30 minutes, which led to the deaths of patients who were on oxygen support.

All the victims were on ventilators and in need of constant oxygen supply. Around 150 patients were either oxygen-dependent or on ventilators. The year began on a tragic note when 10 infants died in a fire at a special new-born care unit of the Bhandara district hospital on January 9.

Seventeen infants, aged one to three months, were in the ward at the time of the tragedy. A probe panel had suggested that trained engineers should be employed at government hospitals that mainly rely on the public works department (PWD) for maintenance work. The six-member committee, comprising health officials, electrical engineers and fire officials, found that the fire in the sick newborn care unit (SNCU) of the Bhandara district general hospital spread from a radiant warmer and electrical wiring system connected to it in the ?outborn section?.

On April 28, four patients were killed after a fire broke out at the private Prime Criticare Hospital at Kausa in Mumbra locality near Thane. The hospital had no Covid patients. In April this year, a major fire broke out in a building housing a private Covid care centre in Chandwad town in Nashik district. Around 22 patients admitted at the facility were shifted to the sub-district hospital in the town as a precaution.