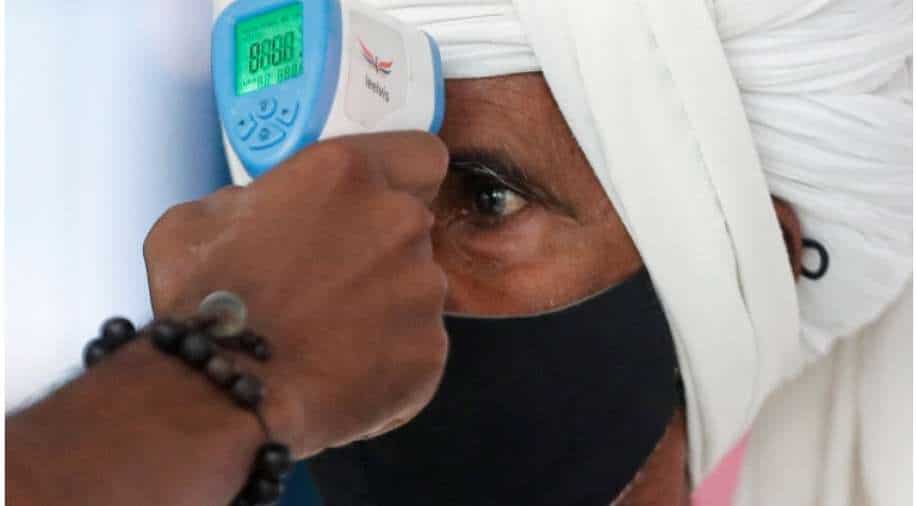 FILE PHOTO: A health worker uses an infrared thermometer to check the temperature of a passenger amid the spread of the coronavirus disease (COVID-19), at a railway station in Mumbai, India, March 21, 2021 Photograph:( Reuters )

"We are seeing a higher COVID positive rate in high-rise residential buildings than in slums...to stop the spread only essential services will be allowed (at night)," said Mumbai Mayor Kishor Pednekar, adding that hotels, pubs and shopping malls must observe the night curfew rules.

Residential areas with five or more reported COVID-19 cases in the city have been ordered to be sealed off.

India recorded 62,714 cases of the coronavirus in the last 24 hours, the country’s Health Ministry said on Sunday, the highest single-day tally since mid-October last year. With 312 deaths, single-day fatalities were also at their highest since Christmas, according to ministry data.

Several government hospitals reported they were running out of critical-care beds in Mumbai city.

In parts of the country, especially Delhi and Mumbai, authorities have imposed bans or restrictions on the Hindu festival of Holi and the Muslim "day of forgiveness", Shab-e-Baraat, which are both observed over this weekend.

Holi is usually celebrated with large gatherings in which people smear each other with colour, while Muslim men typically hold large prayer gatherings at mosques on Shab-e-Barat.

The surge in COVID-19 cases in India comes amid a vital election season, as the eastern state of West Bengal and Assam started voting for state assemblies on Saturday.

The elections will indicate how support for Prime Minister Narendra Modi is holding up after a year of the pandemic and months of mass protests over farm laws his government enacted late last year.

The export of COVID-19 vaccines is facing sharp criticism from many Indians. India is a major producer of vaccines and has supplied 61 million doses to as many as 77 countries as part of both grants and commercial arrangements.

The government said last week it has decided to focus on its domestic vaccination programme and there will be no immediate expansion of vaccine exports.

More than 40 million people have received at least one dose so far, less than 4% of the 1.35 billion population, according to official figures.

"The vaccination drive has to be scaled up massively, and test and trace and isolation protocols have to be strengthened across the country," said S.K. Sinha, a Health Ministry official.